Higher temperatures and growth of cities have led to a worsening of urban heat island effects globally. Continued temperature rise will have devastating effects on human and environmental health. That is why it’s important to utilize a variety of strategies to reduce heat absorption and cool off cities.

For those who have had the experience of moving away from the suburbs and into the city, you may notice that despite the recorded temperatures being the same, summers in the city just feel hotter.

The sweltering difference is not a mind trick but a recorded phenomenon called an “urban heat island” or the “heat island effect,” where urban areas are significantly warmer than their surroundings. The temperature disparity has become such an issue that engineers and designers are looking for ways to mitigate the rising heat entrapment in large cities.

A heat island describes a metropolitan or urban area where the local surface temperature is higher than the surrounding rural area. The Environmental Protection Agency (EPA) has reported that many cities around the U.S. will record air temperatures upwards of 10°F (5.6°C) warmer than the surrounding area with natural land cover. This effect is separate from the warming caused by climate change, which is a rise in global surface temperatures. However, as global temperatures rise, the heat island effect is exacerbated.

Heat islands form in areas with a higher percentage of asphalt, concrete, buildings, and other structures than vegetation, compared to their surroundings. These constructed surfaces absorb heat which increases surface and ambient temperatures. Areas with trees and vegetation have a natural cooling effect because of the shade and evapotranspiration they provide. 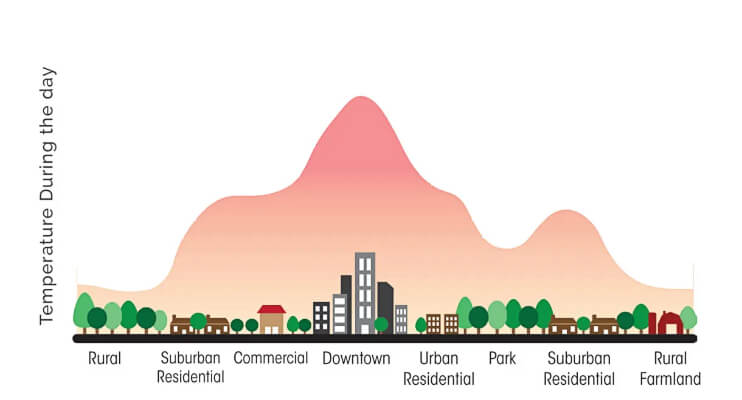 Temperature disparities during the day between rural, suburban, and urban areas. Image used courtesy of FirstGreen

Heat islands are noticeable year-round but are most significant at night and in the winter. This is because rural areas will cool down faster during these times, but city surfaces retain heat and are slower to cool. Other contributions to heat islands include the size and shape of a city, urban deserts (the lack of vegetation), urban canyons (the entrapment of heat between buildings), humidity, and ubiquitous fossil fuel emissions. Higher emissions in cities can create a mini greenhouse layer, trapping escaping heat and producing their own heat.

Reducing global temperatures by controlling and reducing the amount of fossil fuel emissions in the atmosphere will have a compounding effect on mitigating urban heat islands. If the climate continues to warm, city residents will face higher temperatures and longer heat waves. Since more than half of the global population lives in cities today, and it is expected to reach 70% of the global population by 2050, tackling urban heat islands is imperative to protecting human and environmental health.

The Importance of Disrupting the Effect

The continued rise in heat intensity will ultimately hurt the infrastructure contributing to the heat. Asphalt and buildings are both shown to deteriorate from prolonged exposure to heat. Asphalt will soften, expand, crack, and even adhere to the bottom of shoes or tires. Buildings are affected differently depending on the materials used to construct them; wooden structures will lose moisture, causing them to shrink, plastics and vinyl can melt, and concrete can crack. The disintegration of city infrastructure can raise the frequency of repairs and the amount spent on it.

As we continue to see hotter summers due to climate change, the ambient air temperatures in cities will also rise. The increased intensity and frequency of extreme heat events have been shown to increase the number of hospital admissions and deaths from heat-related illnesses.

At its mildest, heat illness presents as heat cramps and, at its worst, heat stroke and risk of death. Children under four years of age, people over the age of 65, and those with chronic health problems are most susceptible to heat-related illnesses.

The planting of trees and vegetation in cities has grown as the result of government initiatives and volunteer work as a simple way to help cool neighborhoods. The growth of plant life not only has a cooling impact but also assists with improved air quality and helps cities reach National Ambient Air Quality Standards (NAAQS). 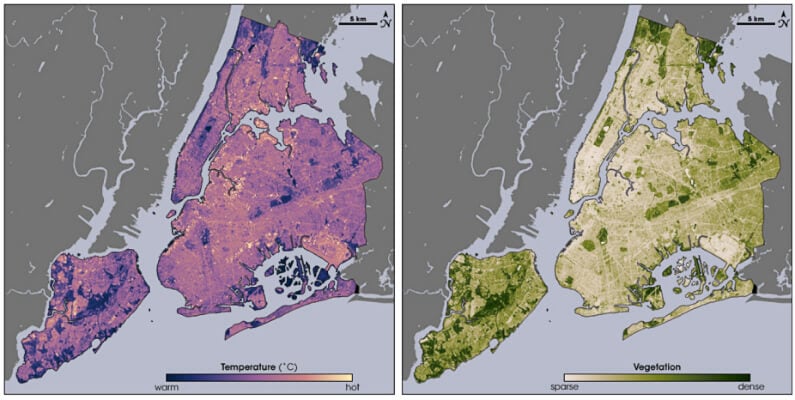 In a Sacramento project in 2006, the Forest Service’s Center for Urban Forest Research estimated that one million extra trees could reduce NOx emissions up to a quarter ton per day and particulate matter (PM) by over one ton per day. It is important to choose low-volatile organic compound (VOC) emitting trees to help reduce the amount of ground-level ozone. High-VOC emitting trees would have the opposite effect and contribute to the amount of ground-level ozone in the neighborhood.

However, while in many cases, increasing the amount of vegetation is a strong first step for cooling off cities, planting initiatives are more effective in drier regions than in wetter ones.

Compare the cities of Singapore in Southeast Asia and Phoenix in the Southwest United States, both large heat islands. Singapore is a city with high levels of precipitation and green cover, but it is surrounded by rainforests. No matter how much vegetation is planted in Singapore, the rainforest will always have more, negating any effect additional plants would have on the city's temperature.

Phoenix, on the other hand, is surrounded by arid land. Increasing the amount of vegetation in Phoenix could actually make the city cooler than its surroundings.

Understanding the hydro-climatic conditions of cities can help determine the best solutions for heat mitigation. In cities where increasing the amount of plant life won’t quite do the trick, it is important to look at how infrastructural changes can be beneficial. Decreasing the amount of dark and absorptive surfaces, increasing shading, and increasing reflectivity are key examples.

Utilizing design strategies like cool roofs (installing a pale-colored coating on a roof) can increase reflectivity, reduce inside temperatures, and lower energy costs. Dark surfaces like parking lots that have high heat absorption can have solar panels installed for shading and be resurfaced by high-albedo coatings. Parking lots built underground also minimize the amount of absorptive surfaces.

In 2001, the City of Chicago installed a green roof on the City Hall as part of an EPA study and strategy to reduce the heat island effect and improve air quality. The site was chosen because the large roof area is ideal for planting and collecting data on the project. The building is half City Hall, half County Building; the green roof only covers the City Hall half, allowing on-site comparison of the effects of a green roof versus a traditional roof. 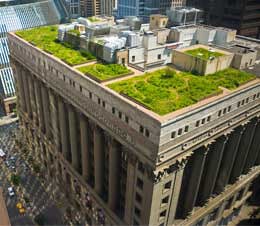 Aerial view of Chicago City Hall. Image used courtesy of NPS and the City of Chicago

The green roof comprises 20,000 herbaceous plants, 112 shrubs, and two trees. The only study conducted on the results of the installation was also in 2001.

While this single project was deemed not to have cooling benefits on the city as a whole, it is a strong example of how vegetation can aid in the reduction of urban heat islands.

The cities of Los Angeles and Phoenix have deployed their own projects for testing strategies to reduce heat absorption and heat islands. Their strategies specifically target dark asphalt, which can absorb up to 90% of the sun’s energy during the day due to lack of albedo, by exploring the use of reflective sealants. 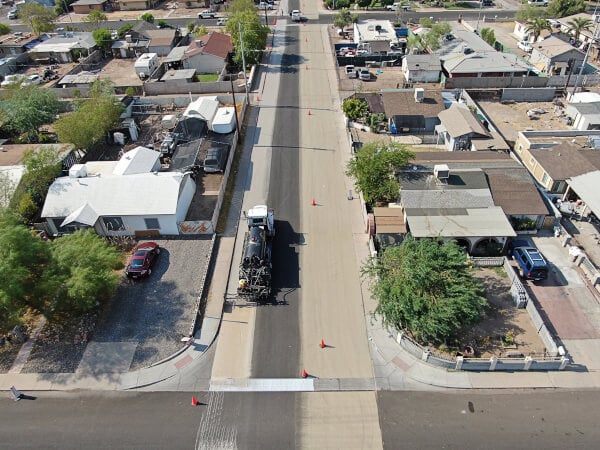 The “cool pavement” projects have been described to mimic the effects of sunscreen, protecting and insulating the asphalt. Many engineers have completed extensive testing to examine the results of various colors, sealants, and application methods.

Phoenix has tested the difference in applying the cool pavements by squeegee versus a spray. The spray method was found to have faster application and lower labor costs. The city uses a light gray sealant with a matte finish to reduce glare.

Research conducted at UCLA projects that in downtown Los Angeles, the number of days that will exceed 95 degrees is expected to triple by 2050 based on current climate change trends. Los Angeles is also testing neighborhood microclimates by increasing the number of trees planted in designated areas.

Los Angeles reports that their cool pavement installations showed a 10°F cooling difference from streets with standard asphalt sealants. The light gray pavement in Phoenix measures 28% higher reflectivity than standard asphalt and is projected to save $15 million annually from the decreased air conditioning costs as a result of just a 1°F reduction in average city temperature.

As cities grow and temperatures rise, finding ways to cool urban areas will be incredibly important to human and environmental health. By understanding the impact of different strategies–plants, reflective and light-colored surfaces, shading, increasing renewable energy use–on the temperatures of cities, they could be implemented in new urban construction, tackling issues proactively instead of retroactively.