This article provides an overview of the versatile combinations of chipsets and packaging and the resulting performance.

Indeed, with the introduction of AlCu bonding for the top side contacts, reliability was further increased and the SKiM63/93 is now a well-established solution for demanding power and load cycling applications that employ the latest technologies. The unique design of the SKiM63/93, based on a laminated busbar structure and multiple connections between the DC-link and the substrate, delivers a very low stray inductance, making the SKiM63/93 suitable for high-speed switching operations utilizing SiC chipsets, as required for DC-DC converters, e.g. EV charging stations. This article provides an overview of the versatile combinations of chipsets and packaging and the resulting performance. 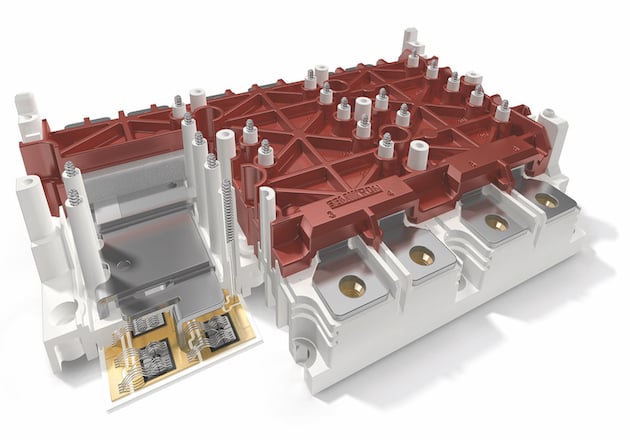 An image of the SKiM63/93 module is shown in Figure 1. The module design allows the user to simply assemble the driver PCB on top of the SKiM63/93 and secure the IGBT driver printed circuit board (PCB) with a well-positioned set of screws. These screws connect the IGBT driver with the SKiM63/93 without the use of solder, instead of employing SEMIKRON’s tried and tested unique spring technology. This solderless assembly simplifies overall inverter design and enables the driver to be accessed easily in the event of repair and maintenance, even in the field. The internal structure of the SKiM93 is shown in Figure 2. Image A on the left side shows the structure of the low-inductance laminated busbar and its multiple connections to the substrate. By connecting the power terminals to the Al2O3 ceramic substrate using three individual solid busbars, both static loss and stray inductance from terminal to the power semiconductors are reduced. 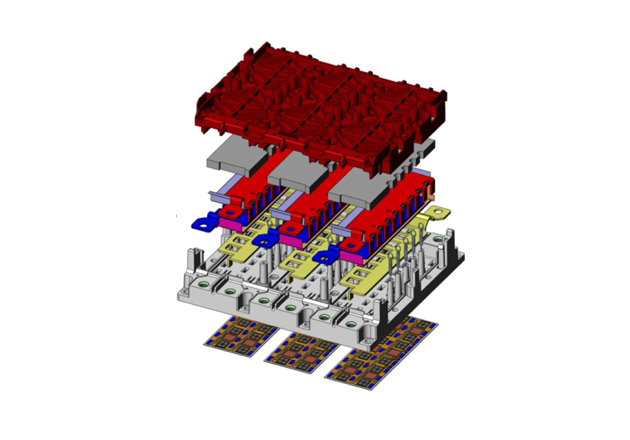 Figure 2: The internal structure of the SKiM93

Another important focus during the design stage of the actual SKiM63/93 is thermal performance. Besides the internal structure, a high-performance thermal interface material has been applied, creating an evenly distributed layer of the optimal thickness. Furthermore, the choice of a low-inductance dedicated internal busbar structure provides a certain degree of freedom in IGBT and diode chip positioning. Utilizing this flexibility, the IGBT and diode chips are positioned such that the thermal losses are distributed more homogeneously across the substrate. This avoids the concentration of local loss density on the ceramic substrate, creating hot spots that can potentially limit performance. The simulated loss generated in IGBT and free-wheeling diode chips and the resulting peak junction temperature distribution over the entire ceramic substrate results in fewer hot spots and allows for the development of more powerful inverter systems that utilize inexpensive heatsink designs.

The overall design of the baseplate-less SKiM63/93, which features pre-applied high-performance thermal interface material on an optimized water-based heatsink-eliminating the additional thermal resistance of a dedicated baseplate found in many off-the-shelf products-delivers unprecedented power density that can be yielded from the chipset employed. The performance achieved in an optimized configuration such as this is equivalent to the capability of pin-fin IGBT modules found mainly in automotive applications but avoids the potential risks of water leakages that are inherent in pin-fin constructions as part of a pin-fin IGBT module mounted with a gasket into the designated hole of a water-based heat sink.

Today, the SKiM63/93 IGBT module platform is compatible with a variety of chips. The voltage ranges from 650V to 1200V and 1700V blocking voltage. The IGBTs utilized are produced by leading chip suppliers and achieve different trade-offs between static and turn-off losses, enabling the user to design the module in line with the specific application conditions. The diodes employed are predominantly state-of-the-art SEMIKRON CAL4 diodes that deliver unprecedented performance with regard to static and dynamic losses. Silicon carbide diode populated SKiMs as a part of the portfolio are ideal for high-frequency switching applications.

Owing to the variety of available chips and chip combinations, the SKiM module can be tailored to meet the needs of the given application, delivering superior performance in certain applications than off-the-shelf modules. The figures below compare the performance of modules that use standard types of silicon chips with those with dedicated chipsets based on different Hybrid Silicon Carbide (HSiC) chip selections. The main differences under identical application conditions are shown accordingly. Figure 3 shows a performance comparison between a converter operating at fc=20kHz, VDC=600V, cos phi = 0.8, using a SKiM93 based on a standard silicon IGBT/ silicon diode chipset and the same converter utilizing a SKiM93 equipped with silicon IGBT and SiC diode on the substrate.

For more demanding application conditions such as operation at cos(φ) of -1, the SKiM63/93 provides the flexibility to optimize the populated diode space accordingly. The result of optimization for operation at fc=20kHz, VDC=600V is shown in Figure 4. Figure 4: The result of optimization for operation at fc=20kHz, VDC=600V

The effect of thermal cycling is frequently mentioned in connection with base plate IGBT modules and addresses the aging effect of the connection between the baseplate of the module itself and the ceramic substrate. Over time, the stresses resulting from changes in temperature produced by the substantially different coefficients of thermal expansion of the metal base plate and the ceramic substrate will deteriorate the quality of the thermal connection. This is caused by the interconnection material used, in many cases solder. For a module family such as the SKiM63/93 that has been designed without baseplate, this failure mode has been eliminated entirely.

Furthermore, any reliability enhancing technology developed for SEMIKRON IGBT modules can be adopted in the SKiM63/93. The sintering process introduced to SEMIKRON’s process portfolio more than 10 years ago, for example, offers huge potential to significantly improve the reliability of the connection between the backside of the chip and the substrate. For most IGBT modules based on an Al2O3 substrate, this connection is one of the common causes of a premature module failure. 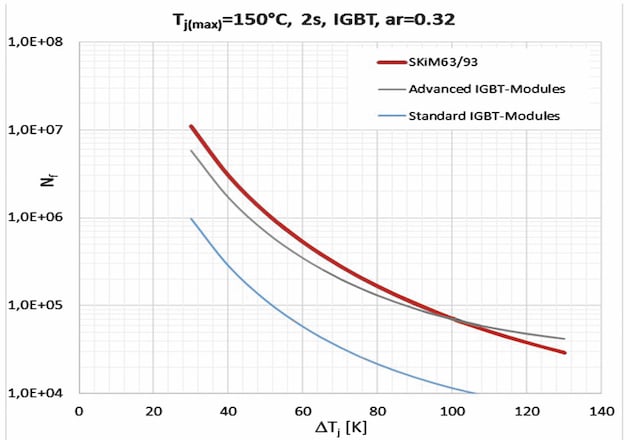 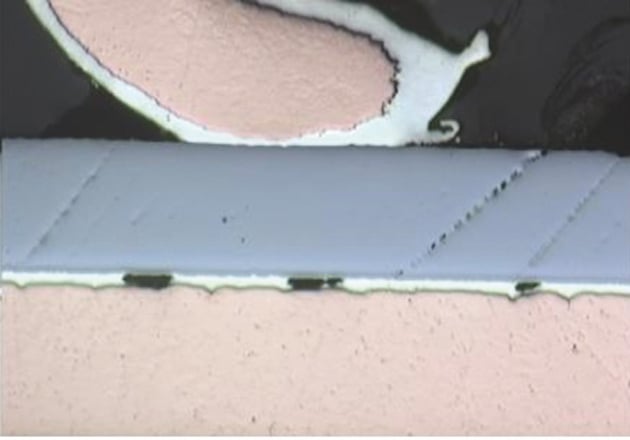 The SKiM63/93 is also available with AlCu bonding for applications with increased power cycling stresses where more robust components are required.

Figure 6 shows a cross-section of an AlCu bond wire where the inner copper wire is covered entirely by an outer aluminum sheath. Such aluminum-clad copper wiring along with carefully chosen wire bonding process parameters has proven to be 4 times more robust under power cycling at ∆T =80K, as shown in Figure 7. 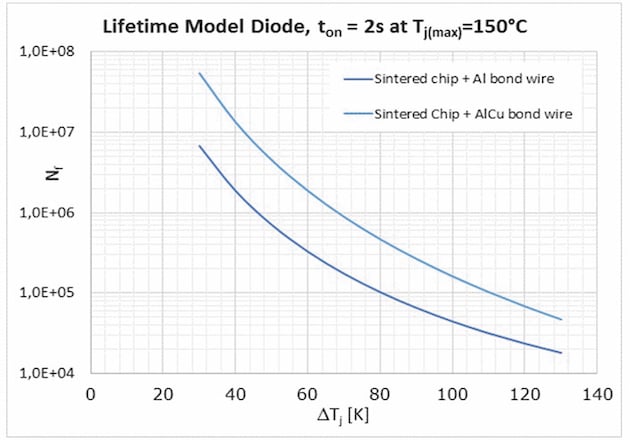 A wide range of chip technologies and processes are available for the SKiM63/93 platform. Figure 8 shows the standard options for this platform: 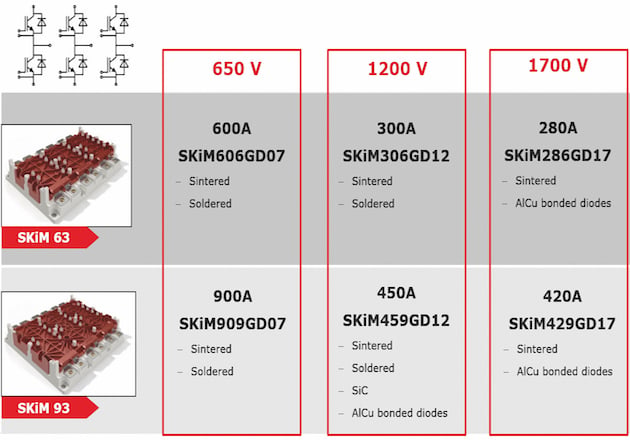 Figure 8: Standard options for this platform

A gate drive adapter board developed for the SKiM63 and the SKiM93 is shown in Figure 9. 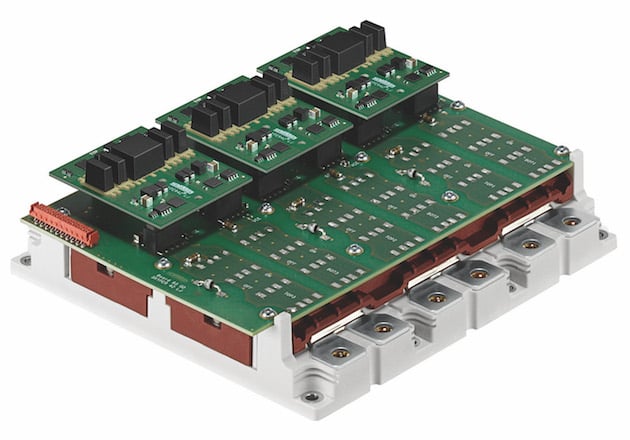 Figure 9: Gate drive adapter board developed for the SKiM63 and the SKiM93.

The SKiM63/93 housing concept features a main PCB, which is screwed on to supporting plastic domes, providing the electrical connections between the contact spring system in the module and the driver PCB. Indeed the main PCB holds the IGBT drivers in place and provides mounting space for gate resistors. Matching with the required gate driving performance of the IGBT utilized in the SKiM63/93 the industrial standard SKYPER42 LJ driver employing state-of-the-art mixed-signal ASICs to reduce the number of overall components is well suited to safely control and protect the SKiM modules in typical applications. This SKYPER42 LJ is shown in Figure 9 on top of the main PCB.

Marco Honsberg received his engineering degree at Bergische University Wupperta and MBA at FOM University of Economics & Management. He worked as a part of Mitsubishi Electric Europe BV Business Development.