User-configurable gate drives offer the power converter stack designer faster turnaround time on testing and control over the optimization of the performance of the power stack assembly. Maintenance engineers can benefit by configuring the gate drive to be compatible with legacy systems.

Testing and commissioning a new converter power stack design can be a lengthy process due to the requirements to change the configuration of gate drive characteristics such as the turn on and turn off resistors (Rgon and Rgoff) and the soft turn off resistor (Rgsoft). The usual method of changing the gate resistors requires the user to disassemble the converter power stack, unsolder and replace the gate resistors, reassemble and then re-run the test. For a large power converter with multiple gate drives this process could take several hours if not days.

User-configurable gate drives also deliver an advantage in the retrofit market where an older piece of equipment requires a replacement IGBT that is no longer in production, or is difficult to source. This may be because the gate drive is now obsolete or contains components that are obsolete.

The options for the maintenance team are to scrap the piece of equipment or attempt to repair the existing gate drive which can be costly and time-consuming.

The advances in microcontroller and complex programmable logic (CPLD) technology have made it possible to integrate advanced functionality into a product such as a gate drive cost-effectively.

The architecture of gate drive is shown in Figure 1. 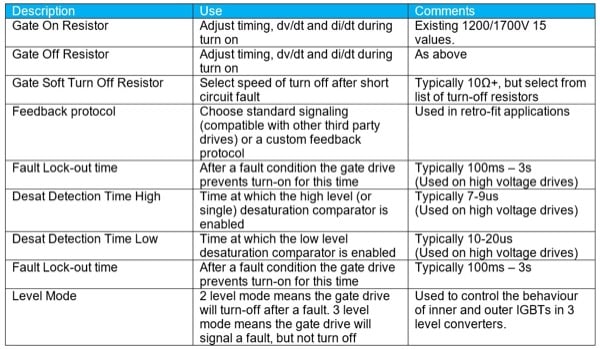 The soft turn off resistor Rgoffsoft is again controlled by the selection of gate drive resistor from the CPLD on the gate drive.

A further advantage of the configurable gate resistors is that the same gate drive can be used to target IGBTs from different vendors. The user can optimize the configuration for each IGBT then program the required configuration on the production line. This gives the supply chain managers in the OEM the option of sourcing multiple IGBTs for the same design giving options on cost, and supply chain security.

In situations where the maintenance engineer needs to find a compatible drive for one that is obsolete it is sometimes required to reconfigure the protocol between the gate drive and the central controller. In the configurable gate drive this is straightforward as the protocol is controlled by the CPLD which can be programmed to be compatible with a legacy protocol. Common legacy protocols can be included as standard which allows the user to switch between the standard and alternative protocols.

Some applications require that the fault lockout time, i.e. the time during which the gate drive will not respond after a fault, is as short as possible to allow the central controller to continue controlling the power converter stack. Making this a configurable parameter allows the converter designer to choose the appropriate value to protect the converter.

Gate drives used in two-level or three-level inverter designs require a different response to a fault in the converter. The gate drive needs to know where it is in a power converter phase leg and respond accordingly. This behaviour can also be configured in the gate drive over the fibre optic link.

Whilst user configuration of the gate drive is beneficial to the converter power stack designer it needs to be easy to use in order to get the full benefits. To achieve this, an interface box called the Power Insight Adapter and a software tool called the Power Insight Configurator have been developed by Amantys to make the process as easy as possible. 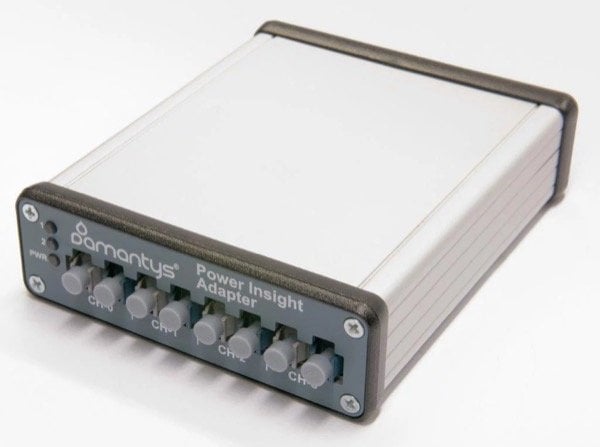 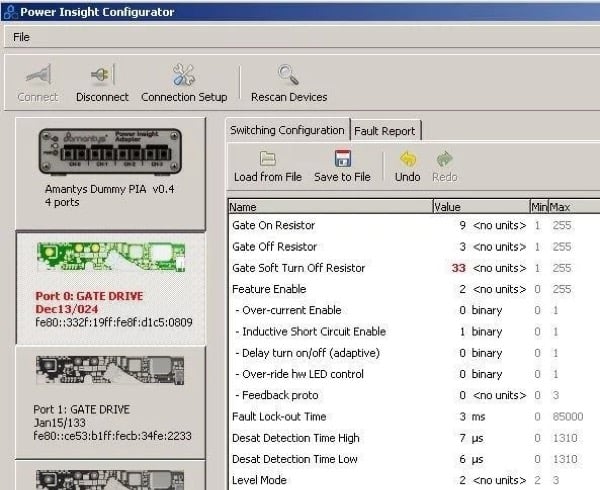 The Configuration pane will show all of the parameters that can be configured on the gate drive.

The user also has the option to program the same configuration into all of the attached gate drives or revert to the original configuration and start again.

Configurations can be stored to a file and retrieved at a later date by using the “Save to File” and “Load from File” buttons. The user can develop the optimum configuration for the target converter power stack and send the configuration file to Amantys for programming into a production batch of gate drives.

Richard Varney works as the Senior Software Engineer at Amantys Power Electronics. He is particularly skilled in the field of embedded programming and software systems. He holds a Bachelor's Degree in Computer Science earned at the University of Nottingham located in United Kingdom.

Bryn Parry works as the Vice President of Corporate Development at Amantys Power Electronics. He is particularly skilled in the field of semiconductors and product management. He holds a Bachelor's Degree in Engineering Physics earned at Loughborough University.