Reducing Noise in an SMPS Through Layout and Filtering

Reducing Noise in an SMPS Through Layout and Filtering

Explore the concept of noise in a SMPS circuit that designers typically focus on mitigating, including ripple and EMI, and learn some basic layout and design do’s and don'ts.

While switch mode power supplies (SMPS) are more complicated than linear voltage regulators, they are a valuable circuit design tool. They provide greater efficiency, saving energy and keeping the circuit a cooler temperature. However, extra care must be taken in the design stage to ensure they operate as expected.

When designing an SMPS for a circuit, it’s important to keep noise in the circuit to a minimum. Specifically, we want to minimize voltage ripple, and EMI. While most of the listed examples apply to buck (step-down) converters, the principles still apply to boost (step-up) converters.

Voltage ripple refers to the small AC voltage that sits on top of the regulated DC output. The goal is to minimize the amplitude of this voltage ripple, to present as clean of a DC source as possible to the rest of the circuit.

A power supply with too much noise could cause digital circuits to crash, or add noise to the output of analog circuits. Voltage ripple may also push a device closer to its maximum operating voltage, shortening the reliability and lifespan of the part.

How Much Ripple is too Much?

The threshold of ripple depends on what the supply is powering. 50mV to 100mV is likely an acceptable range for most devices, but some are more sensitive. Figure 1 shows a page from the i.MX 6ULZ embedded Linux processor datasheet. 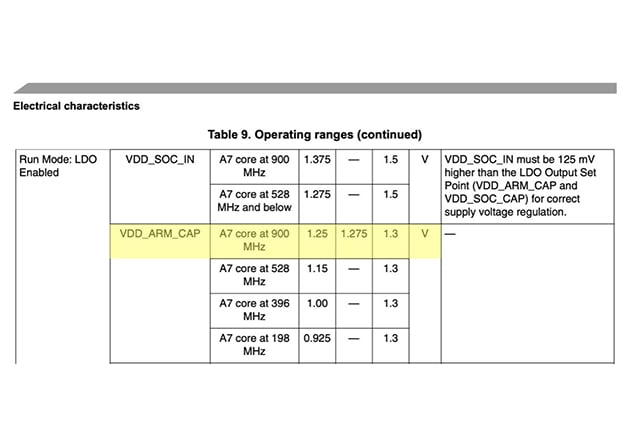 When running the A7 core at 900MHz, the VDD_ARM_CAP rail should be set to 1.275. However, it will work at 1.3V (25mV higher) or 1.25V (25mV lower). The acceptable voltage ripple on this rail is 25mV. It’s important to always check the datasheet for all parts and make sure that you’ve left enough headroom between your supply voltage and the maximum.

Electromagnetic interference (EMI) refers to unwanted electromagnetic emissions that can cause issues in otherwise functional circuits. The high frequency switching of the SMPS causes it to behave like a radiating antenna, emitting electrical signals. These emissions can interfere with other devices and wireless communications.

Layout of an SMPS Circuit 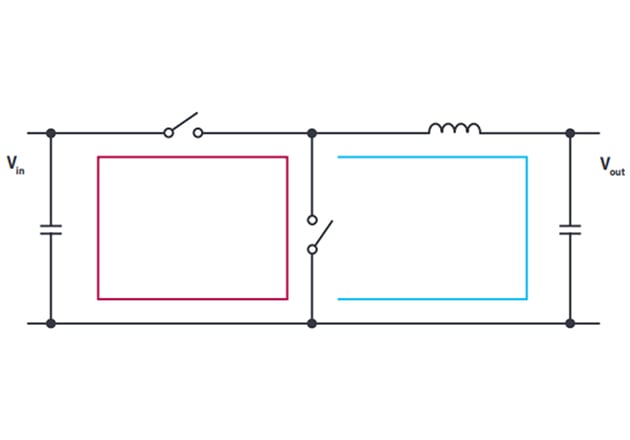 It is also important to keep the switch node as small as possible. In a buck converter, this is the trace between the IC and the inductor, where currents are switched on and off at the switching frequency. This node is the primary source of EMI. The switch node behaves like a radiating antenna and by limiting the physical dimensions of the trace, the generated emissions can be limited.

Many manufacturers — and anyone who has soldered components onto a PCB — will recommend thermal relief between component pads and the surrounding ground plane. This allows heat to build up in the SMD pad or through hole, such that solder can melt there without needing to heat the entire ground plane. It may be advantageous to not include thermal relief on the ground pads of the input cap, output cap, and device. The thermal relief can obstruct the current’s path, when we want as solid of a path as possible between the three ground connections. 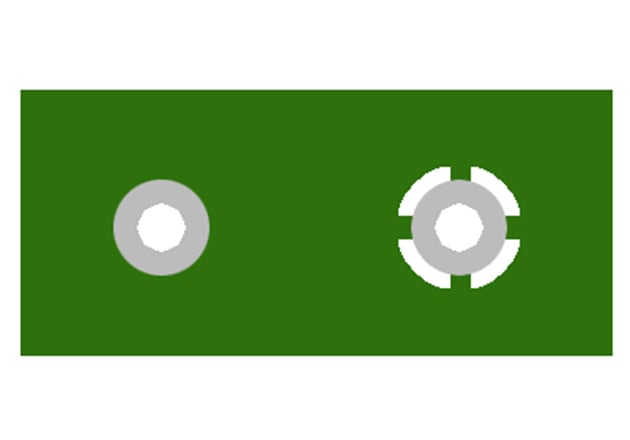 Figure 3. A THT pad without and with thermal relief. Image courtesy of StackExchange.

The location of the SMPS on the PCB is also an important decision. The SMPS circuit should be placed as close as possible to the board’s power input, and ideally far away from other signals on the board.

While some designers recommend using a “power ground” and separating the SMPS from the rest of the circuit entirely, this can often cause more problems than it solves — it’s often enough to just keep the power supply a distance away from the rest of the components. Arbitrarily laying a buck converter in the middle of the board, near sensitive signals (such as high speed digital or quiet analog signals) can lead to performance issues in peripheral circuits. Noise from the power supply can couple with other signals and corrupt the data that they are carrying.

Filtering the Output to Minimize Ripple

A switch mode power supply will always have some ripple on its output, but there are simple ways to minimize this ripple after the fact. Filtering the output by using extra capacitance and a ferrite bead can remove a great deal of high frequency noise from the circuit, while making it more capable of handling sudden high-current demands.

This tip helps keep noise down, but is also a good tool for prototyping. Using a series element such as a ferrite bead (or even a 0 ohm resistor) between the SMPS output and the load can be very helpful during debugging and board bring-up. If the voltage rail is not stable (or not present at all) it can be difficult to tell if the culprit is the regulator or the load. Removing the series element will separate the regulator from the load. This presents an opportunity to check the voltage output with a dummy load (such a resistor to ground), and an opportunity to power the load with an external source. One of these experiments should hopefully reveal who the culprit is, and what needs to be done to fix it.

A Review of SMPS Noise and Ripple

This article introduced the concept of noise in a SMPS circuit and clarified the different types of noise that designers typically focus on mitigating. Ripple, which is present on a voltage rail, has different requirements for each device being powered, some being more sensitive than others.

There is also the concept of EMI, which can rapidly become an issue when a device moves from the prototype stage to the product stage. Lastly, we reviewed some basic layout and design do’s and don'ts when it comes to noise mitigation. In the next article, we will discuss larger design choices that can be made to keep noise out of more complicated power schemes.