This article examines changing a power module's substrate as a possible option for lowering its semiconductors junction temperatures without changing the fit, form, or function of the power module.

Parameters often change during the design cycle which can lead to redesigns and PCB board re-spins. This can create delays in the product development program as different power modules need to be selected and a PCB re-spin is often required to accommodate these new modules. This paper examines changing a power module's substrate as a possible option for lowering its semiconductors junction temperatures without changing the fit, form, or function of the power module.

Often during the design cycle, the output power of the design can change, leading to higher than estimated output currents for the power module. Parasitic inductances due to the product’s layout and assembly can also lead to higher than expected losses.

In many cases, the design has enough margin for the module to accommodate these higher current requirements and higher losses at the expense of higher power dissipation and higher semiconductor junction temperatures. These higher semiconductor junction temperatures decrease the reliability of the power module and a redesign is often necessary to meet the product's operational and reliability requirements. This redesign often requires a larger power module with higher current rated semiconductors or a power module with semiconductors which have lower conduction losses and/or switching losses. This new power module also requires a PCB re-spin and re-characterization of the module's electrical performance.

Another option available to the designer is to improve the thermal design of their product.  Ambient temperature is a fixed parameter in most applications and the designer must either increase airflow or coolant flow for forced air or liquid cooling systems. For convection cooling systems, the heatsink surface area must be increased which will increase the weight and size of the product which is often not desirable or possible.

Vincotech offers many power modules with aluminum oxide (Al2O3) substrates and with the more thermally conductive aluminum nitride (AlN) and silicon nitride (Si3N4) substrates. Many of these AlN and Si3N4 substrate modules were designed specifically for customers who were satisfied with the Al2O3 substrate module's electrical performance but were not able to meet their desired thermal and junction temperature requirements. 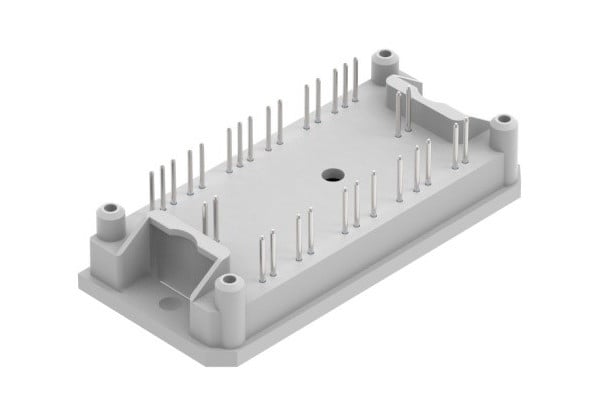 These power modules were required to operate with the following operating conditions: 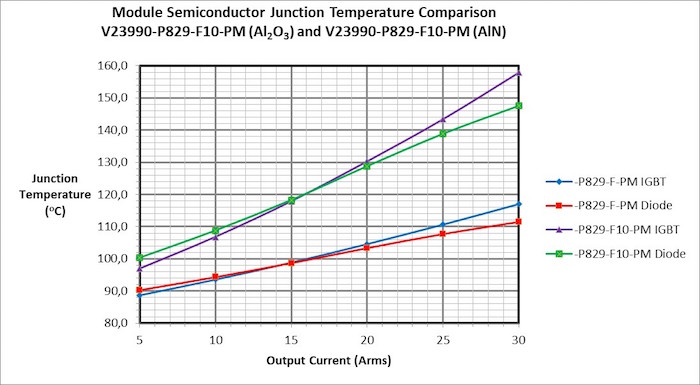 Transitioning from a paper design to a final manufacturable design often results in higher than expected semiconductor temperatures due to design requirement changes, parasitic inductances and over-optimistic assumptions and estimates. The additional losses which result from these conditions manifest as higher than expected semiconductor junction temperatures which will lower the expected lifetime of the product.

Lowing the product’s power rating or re-designing the product’s cooling system is an option however, these options are costly and time-consuming. Changing a power module's substrate material can be an easy option to lower its semiconductors' junction temperatures or to increase its power output for a given maximum junction temperature. Power modules with an AlN or a Si3N4 substrate will have similar mechanical and electrical characteristics as their Al2O3 variants which allow these modules to be a drop-in replacement in the customer’s existing layout. The AlN power module will more than its Al2O3 equivalent power module and will require additional care when it is assembled to its heatsink assembly.

Other substrate materials such as Si3N4 are available and offer a comprise solution which has less thermal resistance than Al2O3 substrates at a lower cost than AlN substrates. Existing modules with Al2O3 substrates can be quickly redesigned with AlN or Si3N4 substrates at low risk since no design changes are required other than a change in the module’s Bill on Materials.