During a press conference at PCIM Europe 2019 in Nuremberg, Masamitsu Okamura, the new Executive Officer, Group President, Semiconductor & Device Group Mitsubishi Electric Corporation (since April 2019, before he was Group President of Electronic Systems) introduced the Power Semiconductor business of the company.

Semiconductors are indispensable components for today’s increasingly high performance products, making them equally important to “resources” for a better future. Mitsubishi Electric, a global leader in the field of semiconductors, has secured its top position with continuous innovative research and development and the investment in the state-of the-art production techniques. The worldwide customers of Mitsubishi benefit from the comprehensive technical services as well as from a broad sales and distribution network.

Mitsubishi Electric’s German subsidiary is located in Ratingen in North Rhine-Westphalia. Today, Ratingen branch is responsible for the technical service, sales and marketing activities in Europe as well as in Russia and South Africa. The success in the semiconductor industry is a result of the company ́s expertise in four product areas: High Frequency-, Opto- and Power Semiconductors as well as TFT-LCD Modules. Regarding quality and reliability as core values, Mitsubishi Electric Europe B.V. has achieved ISO 9001 and 14001 certifications continuously.

Mitsubishi Electric is a leading manufacturer of power semiconductors. The company offers a wide range of products, which covers a broad spectrum of application fields, including power transmission and features exhibit distinct advantages, especially making it suitable even for stringent ambient conditions. Additional advantages of IGBTs over predecessor technologies are minimal switching losses, high switch-ing frequencies and enormous cost savings by simple control.

Today Mitsubishi Electric has more than 60 years of successful experience in the field of research and development of power semiconductors. The market trend towards more compact modules with high efficiency is continuously pursued by Mitsubishi Electric. A future aim of the company emphasizes on the best utilization and development of new materials and processes to offer miniature products at an affordable price with environmentally features.

To guarantee simpler and more compact designs for inverter systems in air conditioners and industrial applications, Mitsubishi Electric Corporation announced the launch of three new Large DIPIPM+ transfer-mould intelligent power modules featuring an input stage rectifier that realizes simpler and more compact designs for use in airconditioner and in industrial inverters. Mitsubishi Electric has developed the world ́s first* high-density output 100A/1200V module in its transfer-mould package. Sales of the new Large DIPIPM+ series began on May 29. Also, the modules were exhibited at major trade shows, including PCIM Europe 2019 and PCIM-Asia 2019 in Shanghai, China. 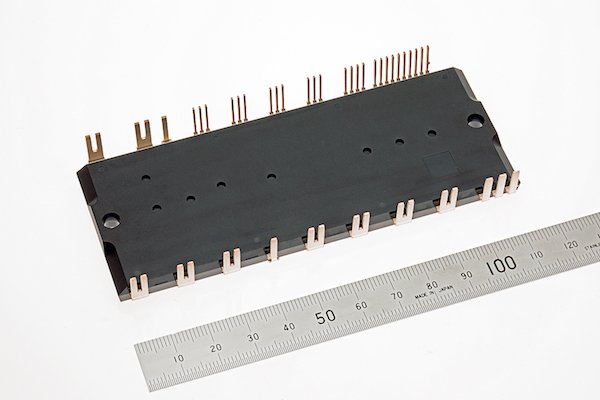 driver components along with protection functions was introduced in 2015. In response to increasing demands for medium power industrial applications, Mitsubishi Electric is now adding a new line-up in the DIPIPM+ family. This product category is called the Large DIPIPM+ and includes three different current ranges: 50A, 75A and 100A(1200V) in accordance with platform inverter design requirements.

The integrated protection features and driver functionalities are aimed at optimizing the engineering efforts required for the inverter design. The protection features include a short-circuit protection system (via current sense), a control power supply under-voltage (UV) protection and an analog over-temperature protection system. In addition, the Large DIPIPM+ is compliant with the restriction of the use of certain hazardous substances in electrical and electronic equipment (RoHS) directive 2011/65/EU and (EU) 2015/863.*According to Mitsubishi Electric research as of May 7, 2019

At the same event, Mitsubishi announced the launch of a new 1200V silicon-carbide Schottky-barrier diode (SiC-SBD) that reduces the power loss and physical size of applications such as power supply systems for infrastructure, photovoltaic power systems and more. Sample shipments start in June 2019 and sales will begin in January 2020. The diodes will be exhibited at major trade shows, including – besides PCIM Europe – MOTORTECH JAPAN 2019 during TECHNO FRONTIER 2019 at Makuhar exhibition complex in Chiba, Japan, and PCIM-Asia 2019 in Shanghai, China.

The target is to utilize the advantages of the SiC technology in order to achieve an energy-saving inverter design. With the Mitsubishi SiC diode, up to 21 per cent of the energy losses can be optimized. In addition, the possibility of achieving high switching frequencies allow to minimize the size of peripheral components. The combination of the Schottky barrier diode with the P-N junction (JBS structure) results in higher reliability. 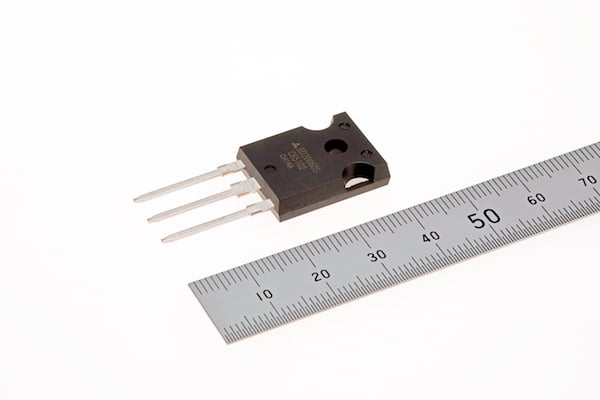 The extended product ranges with different current classes of SiC Mitsubishi diodes make it possible to meet the requirements of different applications including automotive applications. The 600V/20A devices are already available with different packages (TO247, TO263S, TO-220FP-2). The line-up which includes the 10A and the 20A devices in the 1200V category are available from June 2019.