Learn about how a battery emulator can be used in validating a battery management system (BMS).

An emulator can help the engineer to thoroughly test the portable systems, which is essential for both the product development and production phase. The battery cell emulator is isolated from the main power supply and can be used in a series connection simulating higher voltage batteries in the hardware-in-the-loop test of battery management systems. Read on to learn more about what a cell battery emulator is, its applications, and its functions.

Battery electric vehicles (BEVs) and hybrid electric vehicles (HEVs) are common means to reduce pollution and carbon footprint. The batteries in these systems are typically composed of many cells connected in series or parallel combinations. This makes the BMS an essential component of such systems to ensure safe and efficient battery operations.

The key objectives of a BMS include protection of cells and batteries from possible damages, extend the life of the battery, and maintain the battery in the operational state such that functional specifications are met [2]. BMS accurately measures the series-connected cells voltages, battery current, and other key parameters while supporting the development of State of Charge (SoC), State of Health (SoH), and charge balancing algorithms.

What is a Battery Emulator?

A battery emulator is an electronic instrument that simulates real battery electrical characteristics [1]. The key characteristics include power, current, voltage, and equivalent series resistance (ESR). It supplies the needed voltage, power, and current to a device similar to an actual battery. Generally, an emulator will replace the battery inside a portable device for testing purposes. A battery emulator is employed to stress test the battery charger if it is operating correctly over all possible conditions, including normal and faulty scenarios. The most significant advantage of a battery emulator is its ability to change the emulated voltage in a very short instance of time.

Battery emulators and battery simulators terms are often used in the industry and academic space. In general, the purpose of both is to replace an actual battery for the convenience of testing. The battery management system (BMS) facilitates the measurement of cell voltage, temperature, and battery current. It acts as a security controller that monitors and reports the battery’s state while balancing it [2]. It also handles overcurrent issues using main battery contactors with the help of some high-power digital drivers. Temperature management is another safety feature that BMS helps accomplish, so that overheating is prevented.

Mobile and handheld electronic devices comprise a charger circuit that charges the battery. The charger circuit must be validated against specifications so that reliable charging of batteries can be accomplished. In an actual battery, charging a depleted battery takes hours to complete, which can be accomplished in a few seconds using an emulator. On the same lines, discharging an actual battery takes days, but the same can be emulated in a few minutes. Also, emulators can easily simulate an overcharged battery and a completely depleted one easily, which is extremely hard to achieve with an actual battery. This makes emulators an attractive option for validation. An illustration of charging testing using a battery emulator is shown in Figure 1 [1]. 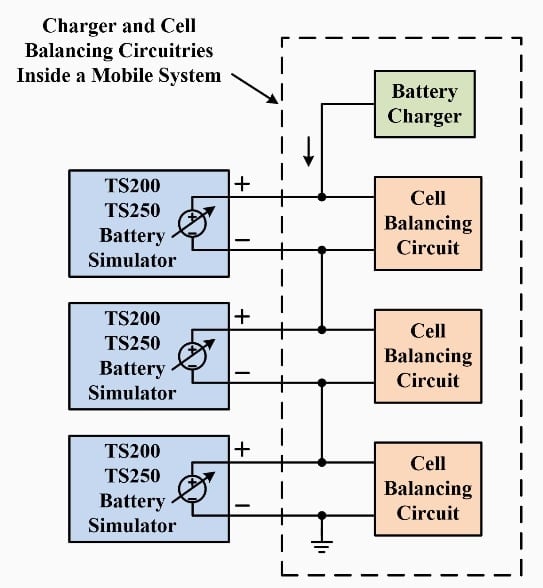 A sample illustration of multiple emulators used to emulate a battery pack to test the cell balancing circuits is shown in Figure 2 [1]. Each cell battery emulator emulates the behavior of a battery cell. The use of multiple emulators is justified because one or more cells need to be configured to be out of balance so that a stress test is set up and the response of the battery cell balancing circuit is observed for such scenarios. These include the situation of one or more cells being overcharged and, in the next scenario, few cells being broken or stuck at low voltage.