Miniaturization of electrical devices became a focus of research and development over the last decades. Especially in mobile customer electronics or automotive applications, an increasing demand for volume optimized devices can be recognized.

The progressing trend means new challenges for the developers regarding magnetic devices because they often are the bulkiest components in electrical applications. Although several more elegant approaches to the optimization of magnetic devices are known, the most used method is the increase of the application’s operating frequency. With the continuous improvement of wide band gap semiconductor power devices the usage of operations frequencies within the lower MHz-range becomes more and more established, especially in resonant power converters. To prevent a further increase of the gap between the technology level of semiconductor and magnetic devices, which already are a significant bottleneck regarding size, losses and thermal behavior, the improvement of magnetic components is essential. For this purpose, new ferrite materials are needed. Their development is challenging due to the large number of relevant material properties, such as saturation flux density, high frequency losses, thermal behavior and mechanical stability. Furthermore, economical aspects regarding the market introduction of new materials have to be considered.

Another aspect is the improvement of the design process of magnetic devices, especially regarding their loss determination. Most academic optimization methods are too time-consuming and require high level mathematic methods, not always suitable for developers. An adjustment to an industry-orientated approach with a sufficient precision and speed is recommended and will be further improved. 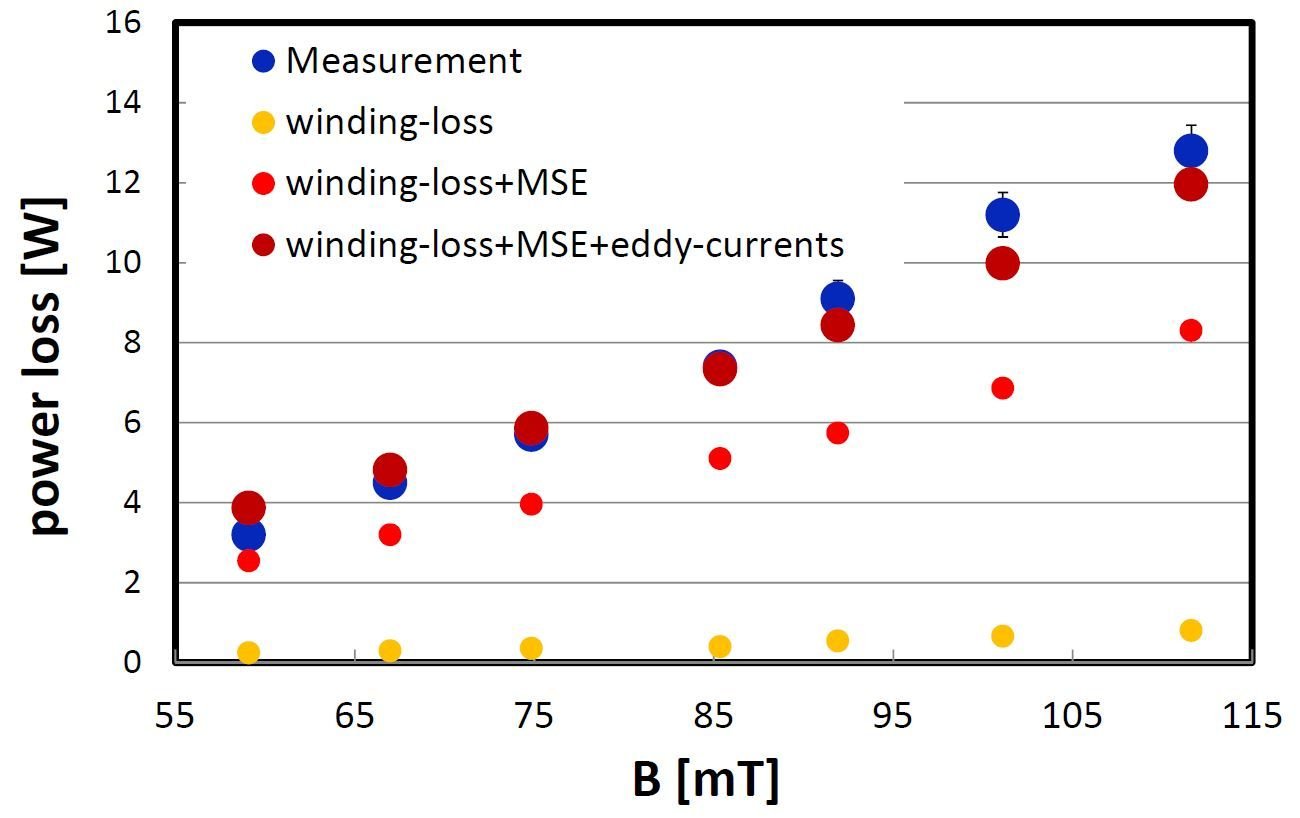 Figure 1: Measured (blue) and simulated (dark red) losses with respect to the flux density. Yellow and red correspond to the winding losses and the core-losses due to the modified Steinmetz-equation. The maximum temperature of the cores decreases from right to left. 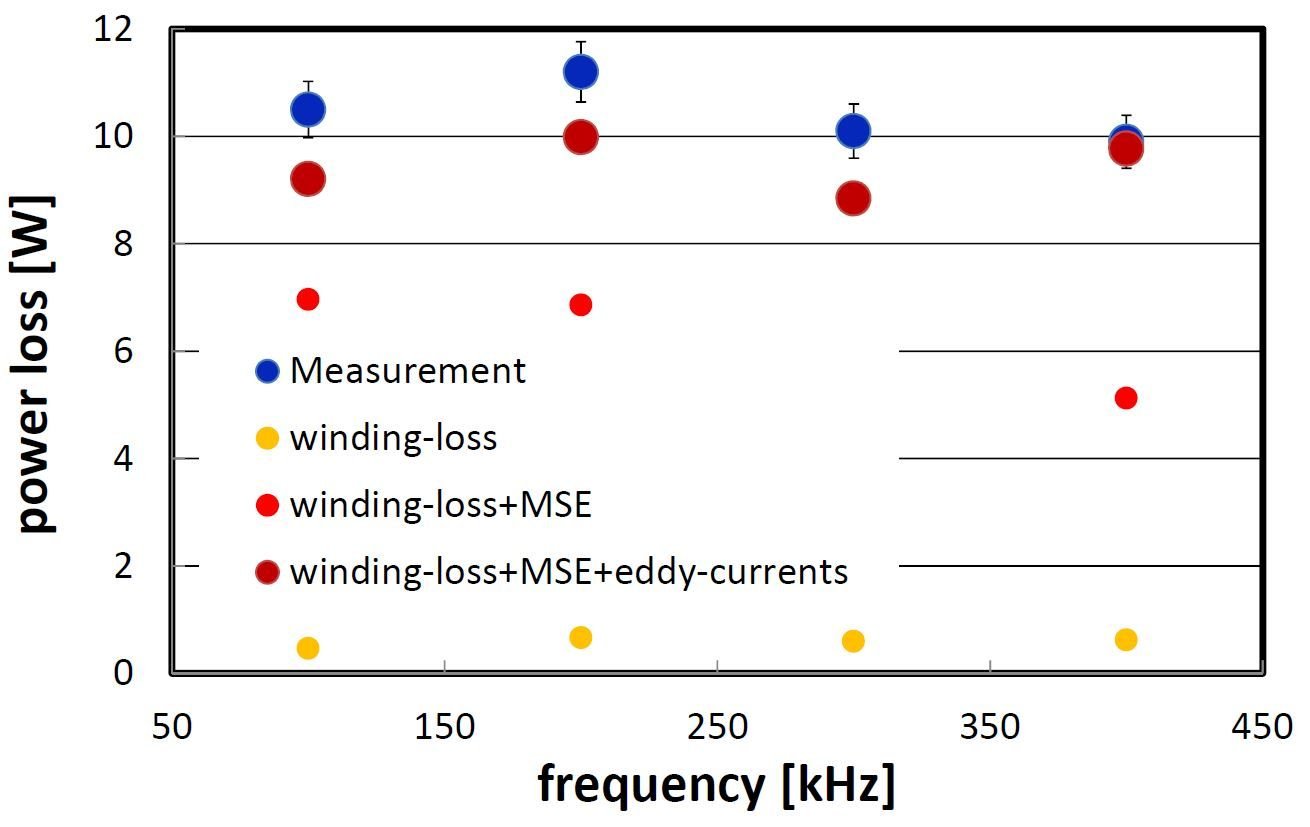 Figure 2: Measured (blue) and simulated (dark red) losses with respect to the frequency.

To ensure a high performance at operating frequencies within the higher kHz-range up to the lower MHz-range a new magnetic material SUMIDA Fi337 was manufactured. It is a power MnZn-ferrite, which is suitable for high frequencies in a range of 0.5 MHz up to 2.5 MHz. More detailed information is presented in [1] and [2].

Loss determination is almost the most important factor within the design process of a magnetic device and the basis of the component’s optimization regarding its size, efficiency and thermal management. Various methods of loss determination and component optimization were published and discussed. However, most of them are suitable for academic applications because of their high precision that causes large time expenditure.

In [3] an industry-orientated loss determination for high-frequency ferrite materials is presented and discussed. It bases on a FEMsimulation using JMAG from JSOL-Corporation but can be realized with any other 3D-FEM-software. For pre- and post-processing, selfwritten scripts in OCTAVE and C# were used. To generate reliable results, realistic current wave forms based on the component’s load in its application were replicated.

After the FEM-simulation was executed the loss-density of each mesh element was calculated in a post-processing routine using the Modified Steinmetz Equation (MSE). The needed coefficients were extracted from representative loss tables based on the values which are given in the datasheet of the ferrite. After calculating the Steinmetz-losses another post-processing routine was executed to calculate the eddy-current losses of each FEM-element also based on datasheet parameters. The results of both calculations are the core losses of the magnetic component. 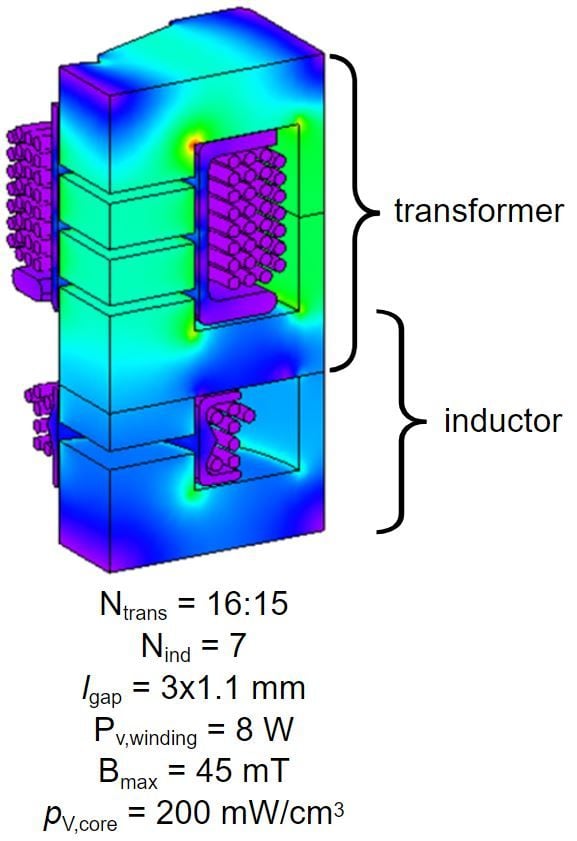 Figure 3: 3D-FEM-Simulation of the optimized LLC-transformer with integrated resonance inductor for a 1 MHz automotive application.

To determine the overall losses of the device a semi-analytical approach based on [4] was used. The RMS-, skin- and proximity-losses were calculated as described in [5] using the realistic currents waveforms of the FEM-simulation. The results of the calculations are the winding losses of the magnetic component.

The results of the industry-orientated loss calculation have been verified by calorimetric measurements using a non-commercial calorimeter as it is presented in [3]. A comparison of the measured and calculated losses shows a sufficient precision of this practical approach, as it is shown in Figure 1 und 2. However, the relative error increases with lower flux densities, lower temperatures and higher frequencies. A detailed discussion of the results is given in [3].

To test the new magnetic material and the presented industryorientated loss calculation, a 1 MHz LLC-transformer with an integrated resonance inductor was designed in collaboration with project partners as a part of a national funded project. For this design PQ 50-cores made of the new material SUMIDA Fi337 have been used. After a first design using conventional loss calculation methods the design was improved by the use of the presented loss determination. A 3D-FEM-simulation of the optimized design is shown in Figure 3. Thereby, optimization and design of the final prototype could be executed virtually in a timeframe of one day. According to [3] it was the first demonstration of a high-frequency ferrite in an automotive application at 1 MHz.

Because of miniaturization of electrical devices and new wide band gap semiconductor power devices the application’s operating frequency increases. Magnetic components tend to be a bottleneck in the design process because they usually are the bulkiest components. To close the gap between the technology level of semiconductors and magnetic devices, the improvement of magnetic components must be enforced. The development of new highfrequency ferrite materials together with industry-orientated design routines proved auspicious. 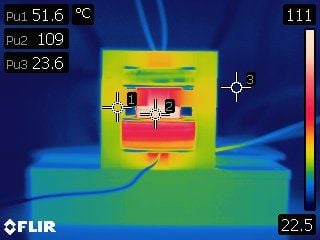 Both approaches, the new material Fi337 and the simplified software based loss determination, were combined and tested in a 1 MHz LLC-transformer with an integrated resonance inductor for automotive application.

Further developments towards a fully automated digital design environment or the use in collaboration with artificial neuronal networks (ANN) are conceivable to achieve even more precision.