This article addresses the possibility of forming built-in overvoltage self-protection elements in high-voltage semiconductor thyristors with local proton irradiation of the main control electrode area. This also shows results of using such solutions in the development of a new high-voltage thyristor T483-1600-60 after successful testing.

The modern market of power equipment requires highly reliable technical solutions and components since the failure of a power semiconductor under operating conditions can lead to a very costly failure of the entire converter system.

With regard to high-voltage conversion devices, which include power semiconductor thyristors (usually designed for a voltage of the order of 6500V), a failure of the power thyristor control driver can cause a situation going beyond safe operation of a standard high-power thyristor, when the thyristor needs to be switched to a conducting state with no external control signal due to the driver failure.

In this regard, an important direction in improving designs of high-voltage power semiconductor thyristors is the introduction of overvoltage self-protection elements into the semiconductor structure [1-6].

This solution helps to prevent the failure of a high-voltage thyristor in the abnormal mode of operation by imparting the thyristor element with dynistor properties (switching to a conducting state when a certain cathode-anode voltage is applied) [6].

It is known that proton irradiation introduces recombination centers into the structure of a semiconductor device, making it possible to adjust dynamic parameters of thyristors which are often used in the production of fast and fast-recovery thyristors and diodes [4]. Similarly, proton irradiation (implantation of hydrogen atoms) induces the emergence of donor centers similar in properties to traditional donors (phosphorus, arsenic, antimony) [4,7].

Local proton irradiation can thus form self-protection elements against overvoltage while accurately adjusting avalanche breakdown voltages, which is especially important for the operation of thyristors in serial assemblies of high-voltage switches [5].

Thus, a thyristor in a serial connection can safely switch after its driver fails (with no regular control signals), meaning that the switch remains operational when the driver of one of the thyristors fails [5].

This design and technology solution was tested on 2000V thyristors with a diameter of the semiconductor element of 80 mm, where an n’ region was formed under the main control electrode region by means of proton irradiation.

The research program included the following:

In the first stage, the thyristors were subjected to an overvoltage in the forward direction from a high-voltage current source that formed a current pulse of a half-sine waveform of 100 μs duration at a level of 0.5 from the amplitude value throughout switching of the tested thyristor.

The output voltage of the source’s idle current was no less than 6kV, the amplitude of the current pulse was set to 35 A. Each sample was subjected to 5 overvoltage pulses. After the tests, values of the repetitively pulsed current in the closed state and the repetitive pulse reverse current was monitored.

In the second stage of the test, samples were subjected to overvoltage in a circuit forming a high-amplitude current pulse of trapezoidal shape with a high rate of rising of the leading edge after switching the thyristor.

Test sample with either short-circuited or open control circuit

The current amplitude was set with additional resistors in serial connection with a resistance of 6.7 ohms or 0.75 ohms. The rate of current rise was controlled by inductance coils in serial connection with a resistor. The voltage on the forming line before turning on the switching thyristor was set to 2300 V. Connection of the test thyristor to the forming line is illustrated in Figure 1.

The voltage on the switching thyristor and on two serially connected thyristors (switching and testing) was monitored with a TPS2024 oscilloscope and voltage dividers Tektronix P5100. The oscillogram of voltage on the tested thyristor with self-protection is obtained with the differential measurement method. The oscillograms of voltage and current at the test sample are shown in Figures 2-6. 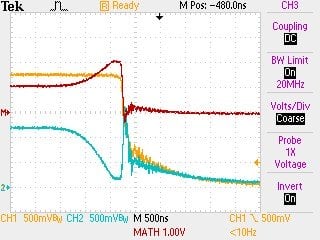 As a result, the thyristors have successfully passed the tests for safe switching, that is, at currents up to 1250 A the self-protection mechanism was correctly triggered when switching under overvoltage (Figures 2 through 6).

The resistance of the thyristors against the rate of current rise in the open state when switching over the anode in the test samples is comparable to the typical values of di/dt resistance when thyristors are switched on by the control electrode. 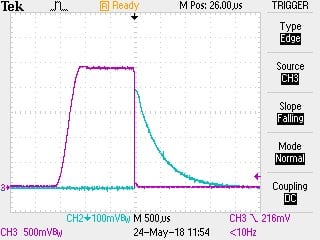 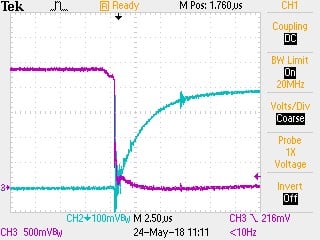 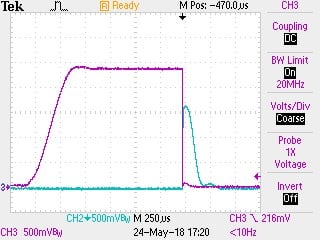 Possibility of annealing the effect of local irradiation

To evaluate a possibility of annealing the effect of local irradiation (in emergency modes of thyristor operation), tests were carried out for resistance to 20 consecutive pulses of surge current with an amplitude of 40 kA at T = 125 and VD = VR = 0.

Then we measured the eligibility criteria and repeated the switching test for the thyristor with built-in self-protection mechanism against overvoltage at a current of 1250 A. The tests did not identify changes in thyristor switching voltage in the forward direction, and there were no parametric and catastrophic failures. 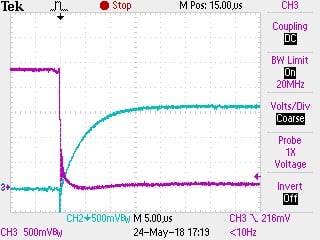 Based on the experience gained with this solution of forming built-in overvoltage self-protection elements, it was decided to design a powerful high-voltage thyristor T483-1600-60, characterized by:

The main parameters and properties of the developed thyristor are summarized in Table 1. 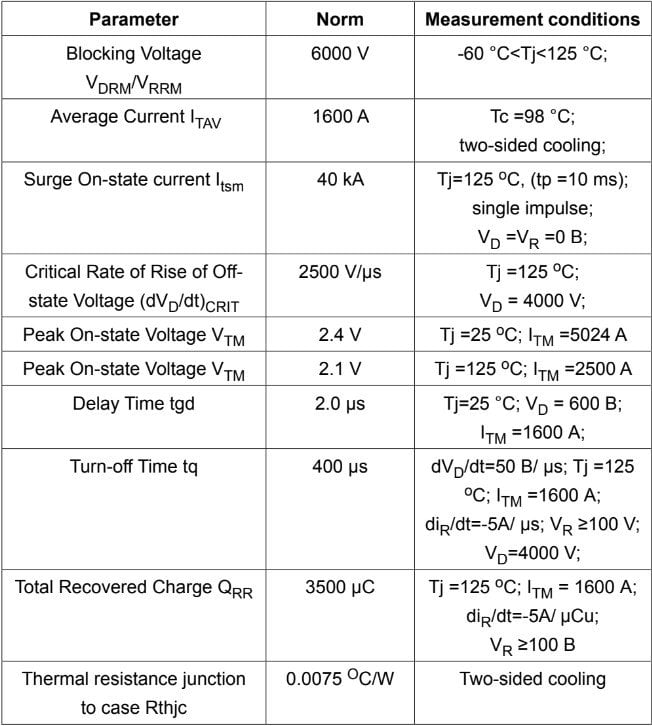 We successfully tested an integrated mechanism of self-protection against overvoltage obtained with local irradiation of the control electrode region of the main thyristor and proved the stability of this mechanism in conditions of electrical effects. The obtained results enabled development of a new high-voltage thyristor T483-1600-60 with built-in self-protection elements against the possibility of driver control failure, facilitating construction of power converters and reducing the chance of failure due to the higher number of involved system elements.

Dmitry Titushkin, Alexey Surma, Vladimir Verevkin, and Igor Savin work for JSC Proton-Electrotex in the R&D department. JSC “Proton-Electrotex” is the Russian leader in designing and manufacturing power semiconductors including diodes, thyristors and IGBT modules as well as heatsinks, voltage suppressors, resistors and measurement equipment. The company is located in Orel city and ships its products through its partners and distributors all over the world.