ICE Components Inc. was asked to design a gate drive transformer capable of driving two MOSFETs at 1MHz with a 15ns pulse width. The customer’s existing design was unable to deliver enough power to the load. This article explains the technical difficulties we faced and describes our solution.

When Robin Benas, the ICE Components engineer, saw the specification of the new gate drive transformer (GT) he knew the project was unusual. The transformer had to be able to switch 12V at 1MHz with a pulse width of 15ns. Switching frequencies of 1MHz are rare om gate drive topologies. The transformer would "drive" two MOSFETs with one primary and two secondary windings, a 1:1:1 turns ratio design and had to maintain voltage isolation of at least 3kV between the primary circuit and both secondaries.

If you mention 1MHz switching to a magnetics engineer, the first things that come to mind self-resonant frequency (SRF) and core loss. Adding to the challenge, the quantities needed by the customer would not justify any tooling expense and the customer preferred SMD. In this application, Robin needed to consider using only available materials, providing SMD mounting and ensuring easy manufacturability.

As you can see in the SRF formula, Robin needed to keep both capacitance and inductance as low as possible.

Here LP, the primary inductance, is affected by the number of turns among other factors. CD is the distributed capacitance and is affected by wire proximity, insulation thickness and the dielectric constant of the insulation. The final challenge was to find a suitable core material for operation at 1Mhz that was available in the needed geometry.

Based on past experience and taking into account all the challenges, Robin knew he must minimize the turns. The final design would be greatly simplified if he could meet the requirements using single turn windings. Based on a single turn, he calculated the core area needed and then went looking for a core.

Gate drive transformers (GTs) are a key component in many modern electronic systems. These simple devices are used to drive the gate of metal-oxide field-effect transistors (MOSFETs) while providing galvanic isolation between the gate and the control circuitry. GT’s also allow the drive of several MOSFETs while utilizing a single control circuit.

He felt his best bet would be to use a planar core as they offer a large core area to core length ratio compared to other geometries. Robin chose a PLT18/10/2 core with an AE of 0.4 cm2. The next step was to check if a material suitable for the switching frequency was available. He was happy to find that Ferroxcube had 3F36, a good high-frequency low loss material available and in stock in the core geometry.

When picking the wire type and size Robin needed to balance the design requirements against the manufacturability of the part. Two factors influenced his wire type choice. First, he needed an isolation voltage of at least 3kV between primary and secondary windings. Second, he would prefer thicker insulation to help reduce the distributed capacitance.

If you remember from the design challenges, reducing the distributed capacitance was important to ensure the minimum SRF is exceeded. He chose TPA3 triple-insulated wire (TIW) from Rubadue. It meets the insulation requirements and provides the thickness of insulation needed. For the wire size, ideally, he would have liked to use 38AWG wire to reduce skin effects at the 1MHz switching frequency but it is hard to strip TIW this small. He settled on 25AWG as a good compromise.

The final detail was how to wind the transformer. Robin decided a trifilar winding would ensure optimal coupling and minimal leakage inductance. In a trifilar winding, the wires are wound onto the core in parallel (see figure 1). The coupling was further increased by twisting the windings together.

Magnetics design is an iterative process. Once you have a preliminary design you need to check it and adjust as necessary. Robin checked the operating flux density, the core losses and the wire losses due to DCR and ACR. He found that all were well within reasonable limits and decided to move forward with the next step of assembling a sample for testing 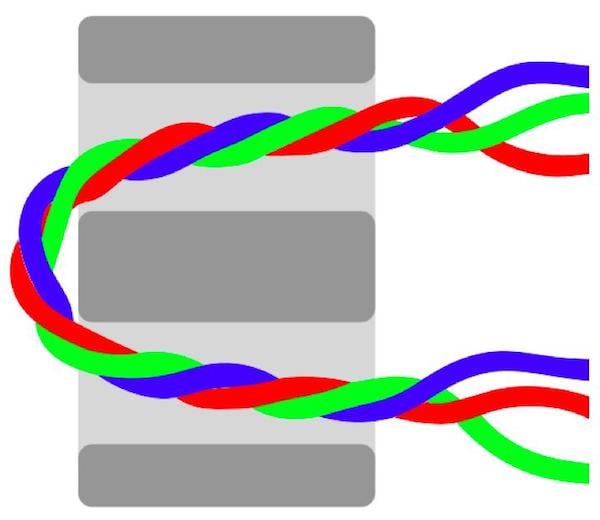 The first step in assembly was to pick the base. The customer preferred SMD and Robin needed a base that would be easy for hand assembly. The base also must maintain the needed distance from the two primary pins to the 4 secondary pins to assure hi-pot. He found a suitable base from Lodestone that had 4 pins on each side.

To create the transformer, the twisted trifilar wires are bent into a U-shape and inserted through the windows of the core (see figure 2). The top of the core is then epoxied in place.

The wire is then untwisted at each end. The secondary windings are taken straight to the terminals, whilst the wires of the primary winding are bent back and routed down the outsides of the core.

Running the primary windings outside the core like this allows us to maintain the minimum creepage and clearance requirements while using the trifilar winding.

Finally, the ends of all the wires are cut to length, stripped and soldered to their respective terminals. 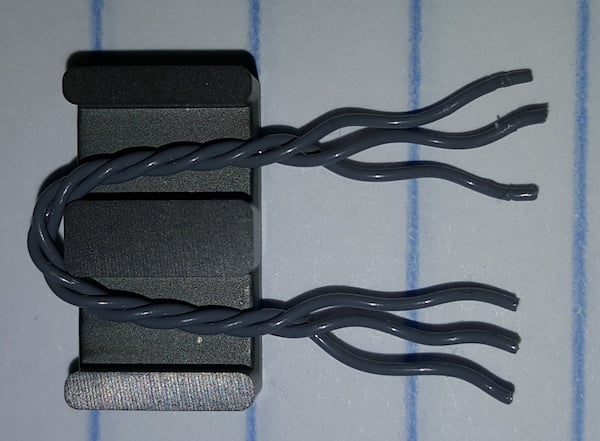 Figure 2: Prototype with top of core removed to show the trifilar windings

Robin constructed 10 prototype GTs for testing in our lab. To test the transformers, their secondary circuits were loaded with a resistive load designed to simulate a dual MOSFET gate drive topology. The test rig was able to drive the transformer with a 12v, 30ns pulse, with the pulse repeating at up to 1MHz. The input and output waveforms were monitored to check for any distortion (figure 3). Under load, the output showed no signs of distortion or core saturation when driven between 200kHz and 1MHz.

The self-resonant frequency was found to be greater than 3MHz (meaning that there is no risk of this causing waveform distortions). The primary inductance measured approximately 2μH. The leakage inductance across the primary with the secondary windings shorted was measured at 79nH. Such a low value indicates good coupling between the windings.

The DCR measured 0.030Ω per winding. Finally, Robin checked that the GT passed dielectric withstand tests (Hipot). Throughout the testing, there was no measurable temperature rise and no sign of core saturation. 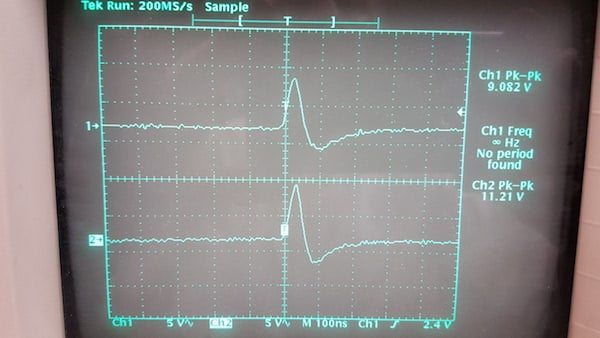 Figure 3: The input and output match

Designing gate-drive transformers take skill, especially when they must meet such demanding specifications. Robin’s final GT design met or exceeded all the customer’s specifications and resulted in an SMD package that is small and easy to manufacture. ICE Components Inc. specializes in such custom component designs. If you would like to know more, please reach out to us.

George Stokes is the president of Ice Components Inc., a manufacturer of power transformers and inductors, current sensors, and custom power applications.