Addressing the Challenges of Utilizing IGBT Technology in Power Modules

Addressing the Challenges of Utilizing IGBT Technology in Power Modules

Power semiconductors are getting thinner, smaller, and faster, and the challenges for manufacturers that employ the latest chip technology in their power modules are getting bigger.

A sure-fire way to decrease losses and increase power density is to improve switching behavior. From the perspective of a device designer seeking to boost a power-converting system’s energy efficiency, this is certainly the best choice of parameters. Power module manufacturers will have to incorporate state-of-the-art IGBT technology into the product to afford designers the option of tweaking these parameters.

The IGBT powered by Infineon TRENCHSTOP™5 H5 is designed for a 15-to-80 kHz carrier switching frequency range with a maximum blocking voltage of 650 V. Available in discrete housings such as the TO-247, it is designed for systems with a stray inductance of 30 to 50 nH for the PCB tracks. [1]

Vincotech is one manufacturer that uses these devices, rather than discrete packages, in power modules. The flow family of modules can handle IGBT’s performance. The company builds power modules with low internal stray inductance that can accommodate many different types of fast-switching power semiconductors, including this 650V chip.

The flow family’s special housing technology has enabled Vincotech to rise to the challenge of incorporating the latest chip technology in a power module with features that include: 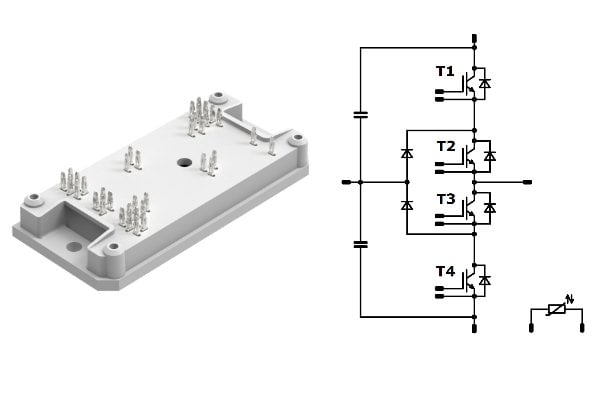 Measurements: The Impact of DC Capacitors 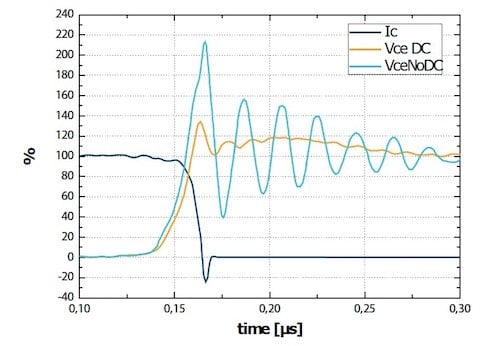 Figure 2. Two power modules’ turn-OFF waveform at the given current Ic with an integrated DC capacitor (orange) and without (blue)

Placing a DC capacitor as close to the IGBT as possible is definitely the smart move for very fast switching power semiconductors.

Dynamic characteristics need to be analyzed regardless of the low inductive package design. The slopes of the collector-emitter voltage Vce and the nominal current Ic during turn-ON and turn-OFF have to be handled, particularly when using a fast IGBT. This is why the measurements focus on these switching slopes, respectively dV/dt and dI/ dt of the T3 (Figure 1). Slowing down power semiconductor’s switching speed decreases the switching slopes, thereby increasing power loss. 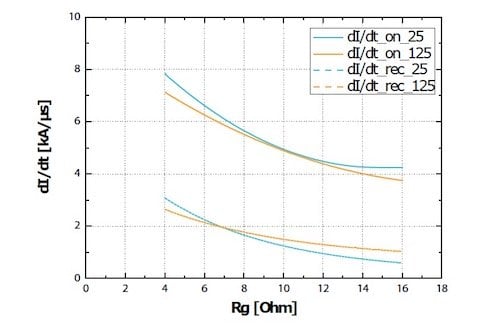 Values below 4Ω are not shown because of measurement noise.

Figure 3 also shows the reverse recovery current slope dI/dt_rec; that is, the curve’s post-peak current trajectory. Temperature has very little impact; the curves are very similar and practically identical at around 7Ω.

Figure 4 shows collector-emitter voltage switching slopes in relation to Rg. The turn-OFF voltage slope remains fairly constant above 4Ω, which confirms that the physics of semiconductors are such that turn-OFF behavior can hardly be controlled by Rg. The turn-OFF dV/dt is quite stable throughout gate resistance range; the only discernible impact is to be seen at turn-ON.

At low Rg, dV/dt_on is high. A higher resistance value can bring it down. The turn-ON behaviors at 25°C and 125°C (solid lines) are similar. The only difference would appear to be the turn-on dV/dt reduction that subsequently occurs at 25°C.

Figure 5 depicts turn-ON and turn-OFF switching energies. The solid lines represent measurements of turn-OFF energy Eoff; the dashes show the data for turn-on and reverse recovery energy (Eon and Err) at room temperature and 125°C. These readings were taken to investigate to what extent Eon, Eoff, and Err depend on Rg. Eon, Eoff, and Err similar tendencies at both temperatures. 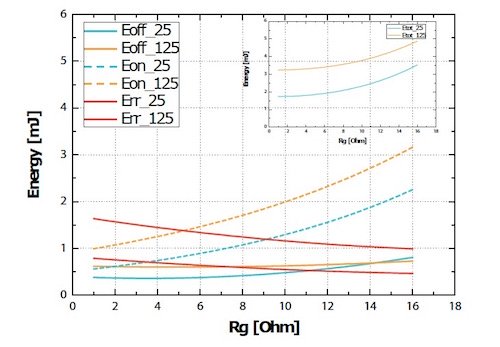 Eon increases with increasing gate resistance because the IGBT slows down and device loss increase. Consequently, reverse recovery energy decreases slightly because of a lower reverse recovery peak, which is in accordance with the dI/dt_rec behavior to be seen in Figure 3.

In terms of the dI/dt steepness and given the total energy Etot at 25°C (blue) and at 125°C (orange) as shown in Figure 5’s inset graph, a gate resistor with more than 4Ω would appear to be a reasonable proposition. However, this would require a tradeoff between the current slopes and total energy losses because of the loss that increases with increasing gate resistance. As we have seen in Figure 4, the gate resistance has hardly any impact on the turn-OFF dV/dt or on Eoff.

IGBTs are getting faster, which complicates their installation in power modules. Integrated DC capacitors can be very beneficial to this end as they prevent turn-OFF voltage overshoots. We measured a reduction from 218% to 137%.

Furthermore, designers also have to strike the right balance between switching speed, switching loss and dV/dt-controlled electromagnetic compatibility for the power-converting system. Our measurements tell us that they need to choose the right gate resistor to this end. In this case, a resistance value greater than 4 ohms would appear to be the best choice for a tradeoff between total energy loss and switching slopes. However, every system and application is different and the right Rgvalue for each has to be determined with the proper measurements.

Daniel Hofmann is an EMEA field applications engineer for Vincotech GmbH in Frankfurt, Germany. He graduated from Johann Wolfgang Goethe-Universität Franfurt am Main in 2011 with a degree in physics and has been working in the electronic engineering sphere since then.