IGBT based power modules are used for a wide power range and voltage range. This article discusses system considerations, effects to the power stage of

IGBT based power modules are used for a wide power range and voltage range. This article discusses system considerations, effects to the power stage of the inverter, and finally, discusses power modules.

The number of induction motors operated with a variable frequency inverter (VFD) increases year by year. The range varies from some watts to some megawatts. The biggest market for frequency inverters is between 1 kW and 100 kW.

Most modern VFDs use PWM inverters with very fast-switching power semiconductor devices such as insulated gate bipolar transistors (IGBTs). These are now the industry standard because of their reliability and low switching losses. The fast change of voltage generated at the output terminals of the frequency inverter causes some effects on the motor cable and also on the motor itself. But is the situation for a power module in a low power different from that of a medium or high power application? Let’s have a closer look what the situation for a power module in low power applications is.

To understand some of the effects of using a variable frequency drive, the complete system has to be taken into account. Typical  applications below 10 kW have a higher tendency to higher switching frequencies compared to applications above some tenth of kW. This can be because bigger inverters and motors are located in environments where noise doesn’t matter as much, whereas low power applications can be placed in noise-sensitive environments. On the other hand, the mass moment of inertia and the resulting torque ripple might not be critical in high power drives cause the mechanical time constant of the application is much bigger than the electrical time constant of the electrical drive.

For VFD operation, the deadtime has to be taken into consideration. This is the time needed to ensure that the complementary switch does not switch on before the other is safely OFF. Therefore it is important to set the dead-time in a correct way for a reliable operation. A too small dead-time may cause shoot through while an increase leads to higher THD.

The deadtime introduces small voltage errors, which are sufficient to produce distorted motor currents, oscillations of the motor torque and therefore even the motor controllability may be lost. Obviously, the carrier frequency has to be increased to lower the ripple current and therefore the torque ripple. By increasing the pulse frequency, the switching dead-time takes a remarkable part of the whole modulation period and, thus, it distorts the average load voltage more and more seriously. The distorted voltage is given by:

The voltage Vm at the motor is not like the set reference voltage Vref.

Dependent on the sign of inverter output current, the distorted voltage also becomes positive or negative. In other words, the higher the switching frequency, the worse the impact of the dead-time. The result is an offset in voltage which distorts the current in the zero crossing voltage. Therefore, minimizing the dead-time is even more important for low power drives where the switching frequency is usually higher compared to higher power rated drives. The inductance and capacitance per length for a usual 3 conductor + ground wire cable with 0.75 mm² would be approximately 0.5 μH and 100 pF per meter which leads to a surge impedance of 70 Ω.

Since smaller power rated motors have higher surge impedance ZM, they tend to reflect more of the applied PWM pulses than larger motors cause the mismatch gets greater.

Consider the following relation between the motor rating and the surge impedance.

The motor surge impedance is not an absolute value as a 1 kW motor varied between roughly 800 Ω to 4000 Ω depending on the motor manufacturer.

As it is obvious that the cable and the motor impedance do not match at all, the reflection coefficient can be calculated with the equation

Taking a 1 kW motor with 1 kΩ into consideration, this results to a reflection coefficient of 0.87. It means that the theoretical voltage at the motor terminals can be 87% higher than the original DC-link voltage.

The cable length plays also an important role but this should not be discussed at this stage. It is considered to be a long cable and therefore the full voltage of the wave reflection is present at the motor terminals. 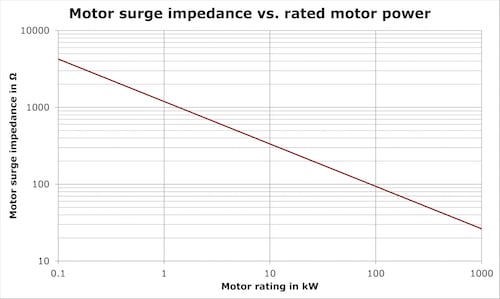 The above figure shows a simulation of a long wire with a DC-link voltage of 565 V and a turn-ON rise time of 100 ns which is roughly 6 kV/μs.

The voltage overshoots are applied with the switching frequency to the cable and to the motor and this has to be considered when choosing the correct cable, especially the isolation of the wires, and also the isolation capability of the motor winding has to be taken into account. Usual motors are only rated up to 1000 V.

One solution to come along is the use of a 230 V motor and inverter as this gives a good margin to the isolation capability. There are also other effects to the motor and especially to the bearings which are not subject of the discussion here. So this is the basis to understand the effects on the application and finally to the inverter stage in a better way.

Losses in the Inverter Stage

Most tools and equations for loss calculations and simulations do not take the motor cable into consideration. As the IGBTs in the output of the drive switch ON and OFF, they have to charge and discharge the parasitic cable capacitances. To keep this in mind is even more important for low power drives. 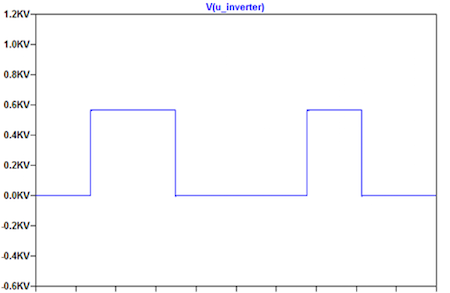 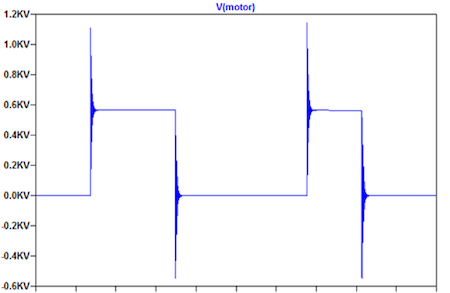 Figure 3. Output voltage of the inverter (top) and voltage at motor terminals (bottom).

Here comes the cable surge impedance into account. The drive output switches face the cable impedance with the DC-link voltage and in time with the carrier frequency and the dv/dt. So the parasitic capacitances of the cable increase the switching losses in the inverter, and the drive runs hotter. If the cable is too long and the capacitance becomes excessive, the drive may overheat and will trip on over temperature.

The RMS current of a 3-phase 400 V motor with 1 kW is about 1.4 A. But the surge peak current that the inverter has to provide is

neglecting all other effects.

These additional currents exist whether a motor is connected or not. So much higher turn-ON energy has to be considered when doing a thermal calculation.

As for the motor terminal voltage, this phenomena always exists and is exhibited to a greater degree on 400 V drives than on 230 V drives due to the higher output transition voltage. It is even made worse by having long leads on small kW drives.

It might be that a turn-OFF pulse comes even before the cable is charged fully. In this case, the semiconductor has to be able to switch the current safely OFF. The RBSOA is important during these turn OFF transients. The reverse biased safe operating area curve gives the maximum current and voltage which the device can handle simultaneously during turn OFF. As most chip suppliers specify the RBSOA to twice the nominal rated current of the semiconductor, a bigger chip might have to be considered for the design or the cable length needs to be limited.

Several elements have to be taken into account when designing a low power drive. One major concern is the chip size and current carrying capability of the chip as additional losses will present when it comes to long motor cables and higher carrier frequencies.

Also, the quality of cable plays an important role because of the impedance mismatches between the cable and the motor. Transient voltages can easily reach the isolation capability of the cable insulation but also the motor winding insulation.

An additional topic is the THD as the deadtime becomes a remarkable part of the whole modulation period with high switching frequencies.

Finally, the turn-OFF capability of the semiconductor has to be considered as its ability is usually limited to twice the nominal current rating.