This article presented HT-3000, a high-performance power module that takes full advantage of the benefits of wideband gap devices.

Over the past decade, substantial effort has been devoted to mature and commercialize wide bandgap power devices [1,2] for discrete and multi-chip power modules (MCPMs) meeting the demands of power electronic systems which include high speed motor drives [3], down-hole drilling [4], hybrid-electric and all-electric vehicle chargers [5], and solar/wind inverters [6] to name a few. As such, the adoption of wide bandgap-based devices, subcomponents, and systems has increased exponentially exhibiting a substantial increase in the power density and efficiency of the system, simplifying cooling requirements, and extending the reliability of the overall system.

To address the needs of an array of applications, a high temperature, high performance half bridge power module was developed for industrial, aerospace, and automotive motor drive applications to exploit the superior characteristics of wide bandgap semiconductors. The HT3000 is rated to +1200 V, +400 A, and 3.6 mΩ on-resistance per switch. This high power density power module was designed to house both SiC and GaN power devices in an industry standard footprint. In addition, other configurations, such as common source and common drain, are available as well. Figure 1 shows a CAD image of the HT-3000 with dimensions. 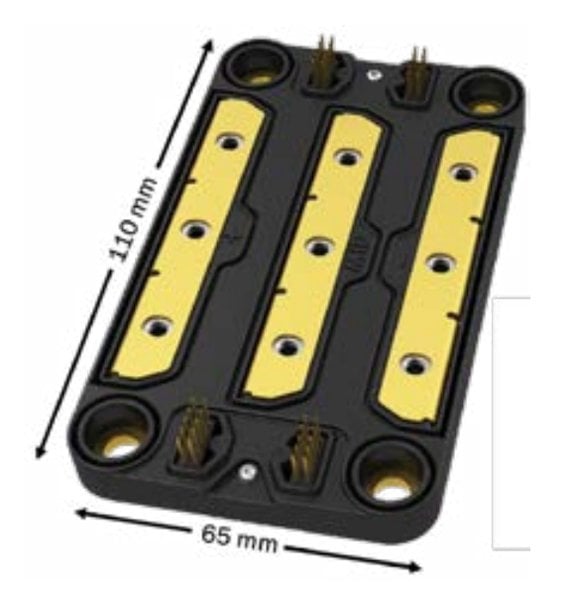 APEI employs a design process that jointly uses SolidWorks®, a design-focused software, and COMSOL Multiphysics®, a modeling-focused software, to interactively design and model a power module or system to achieve optimal performance using the minimum design time. During the design process, a large series of adaptive finite element analysis (FEA) simulations were performed to fully optimize the thermal, mechanical, and electrical characteristics of the power module. Properly identifying the impact of material and geometry changes were crucial in designing an effective and robust power module. An example of a thermal resistance sweep as a function of thermal conductivity and baseplate thickness is shown in Figure 2 (left). Since both parameters impact the thermal resistance of the power module stack-up, it is imperative that a matrix of values from both parameters are modeled to pinpoint the optimal solution. As an additional example, deflection surfaces were extracted in a similar manner as the thermal performance. Surfaces were plotted representing a series of sweeps of the CTE (ranging from Kovar – 5.5 ppm/°C to Aluminum – 23.1 ppm/°C) and thicknesses (ranging from 0.5 mm to 6 mm) as shown in Figure 2 (right). The trade-offs between the design variables analyzed and optimal dimensions and material were selected that maximized performance and minimized cost. 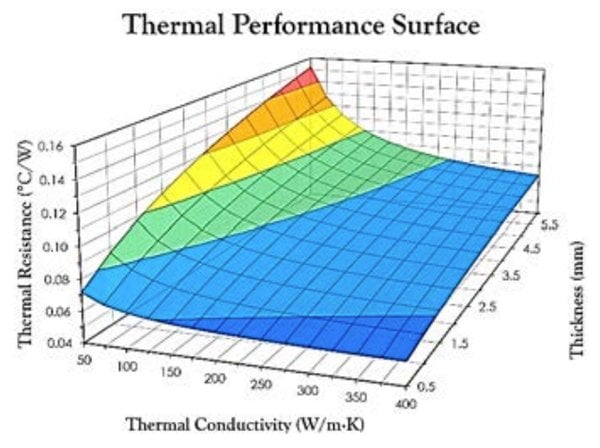 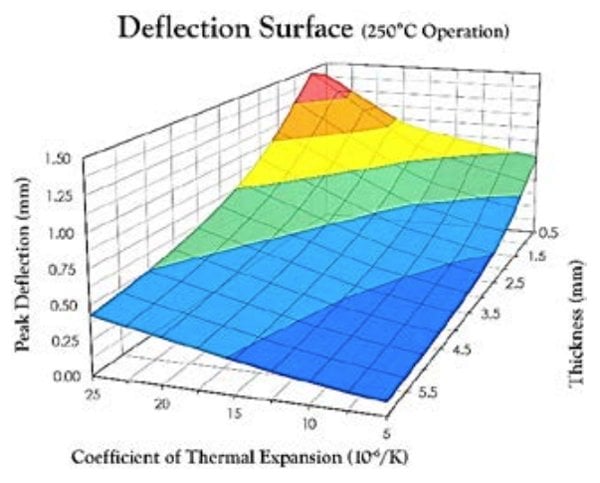 To gain a better understanding of how inductance of the HT-3000 compares to various other commercial power modules, the power loop of the HT-3000 was modeled using COMSOL Multiphysics®. The resulting comparison is presented in Figure 3. Two commercial modules are standard half-bridge “bricks” whereas the other two are thin 6-pack pin style packages. As shown, the HT-3000 has a substantially lower inductance than all other options (while also exhibiting a much higher current carrying capability). This is primarily due to the low profile of the module which shortens the length of the power contacts, wide power contacts since inductance is inversely porportonal to width of the contact, and the layout specifically designed for paralleling many devices. It serves as a salient example of the benefits of designing modules from the ground up to embrace the potential of high frequency wide bandgap power devices. 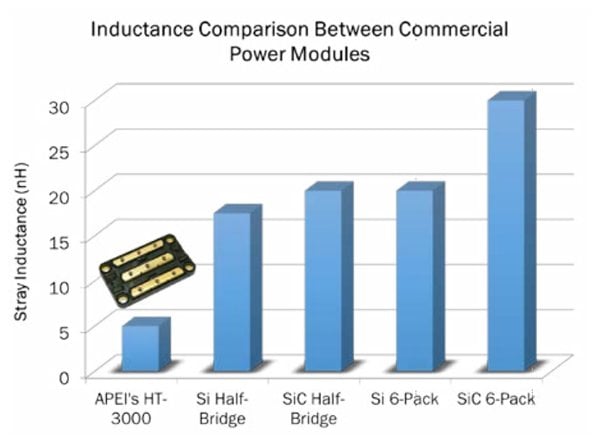 Figure 3: Parasitic inductance comparison between the HT-3000 and other power module types

For power electronics systems, it is not only important to reduce on-state losses but also reduce switching losses. Consequently, the majority of the switching losses is dominated by the device speed and inductance associated with the module and eventually system as a whole. In addition, to reduce the size and complexity of existing systems, the demand for higher switching frequencies continues to increase. Thus, the need for low inductance, high power density power modules with fast transition speeds is an enabling technology that allows efficient, high frequency operation. Figure 4 illustrates switching test results for the HT-3000 power module with two different gate resistor configurations (10 Ω and 5 Ω, respectively). The 10 Ω gate resistor results in less than 100 ns for a total of 40 mJ of loss for both the turn-on and turn-off events, switching 600 V and 400 A. However, the 5 Ω gate resistor configuration results in very low rise and fall times of 50 ns or less, and on/off switching losses of under 20 mJ total, while maintaining extremely clean switching waveforms of less than a 50 V overshoot under 600 V and 400 A switching conditions. 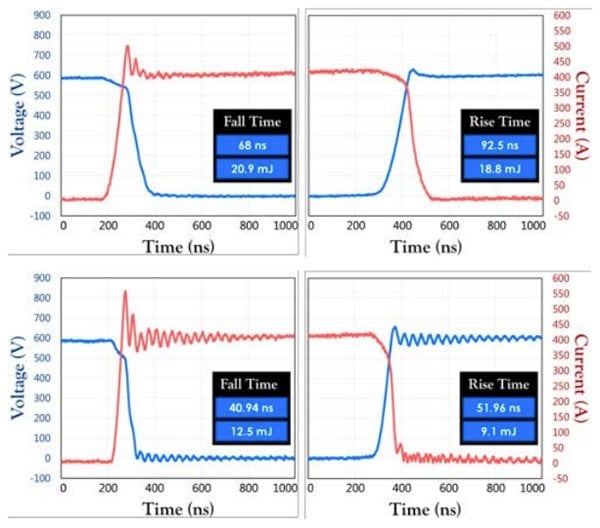 A summary of the switching losses and rise and fall times as compared to other commercially available Si power modules is shown in Figure 5. APEI’s HT-3000 has roughly one-fourth the total switching losses compared to both Si IGBT-based power modules (300 A cont.) In addition, the HT-3000 can switch over 2 – 3 × faster than its counterparts. As compared to other commercial SiC power modules, the HT-3000 has the lowest known on-resistance which significantly reduces system on-state losses. The HT-3000’s superior dynamic characteristics coupled with extremely low on-resistance set it apart from existing Si and post Si solutions. 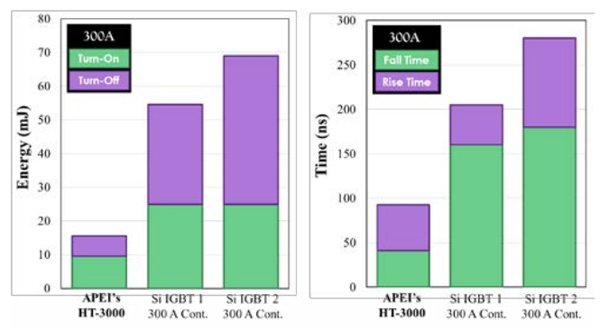 In this article an advanced high-performance power module (HT3000) was presented that takes full advantage of the unique benefits of wide bandgap devices including: high current density, high junction temperatures, fast switching speeds, and reduced losses. Implementation of this advanced package and SiC or GaN device technology may result in substantial system level improvements, particularly in applications where size, weight, and efficiency are paramount.