Russian Minister of Energy Alexander Novak awarded the prestigious and lucrative world science award, the 2019 Global Energy Prize, to professors Khalil Amine of the United States and Frede Blaabjerg (pictured above) of Denmark for their work on energy storage and integration technologies. The prize annually honors outstanding research that impacts live across the planet and provides technology addressing energy challenges.

Established by the Global Energy Association, the prize is rated as one of the world’s 99 major science awards by IREG (observatory on academic ranking and excellence) and as a “mega prize” with laudable goals and exemplary practices by ICDA (international congress of distinguished awards). Khalil Amine of Argonne National Laboratory was recognized for outstanding contribution to the development of efficient electrical energy storage technology, and Frede Blaabjerg of Aalborg University COPRE (Center of reliable power electronics), for outstanding technical contribution to the design of power management systems enabling the integration of renewable power.

The laureates were selected from among 39 contenders from 12 nations. They share the award, its $600,000 prize money, golden medals and golden labels.

“The technologies of 2019 laureates solve the most pressing infrastructure problems of industry – issues of energy storage and integration. Moreover, not only do they serve the goals of sustainable energy development, but – most importantly – they allow for bringing light and heat to our homes and contribute to the electrification of remote regions of the world,” noted Minister of Energy Alexander Novak who presented the Global Energy Prize to the scientists in a ceremony Oct. 3 during the Russian Energy Week International Forum in Moscow. 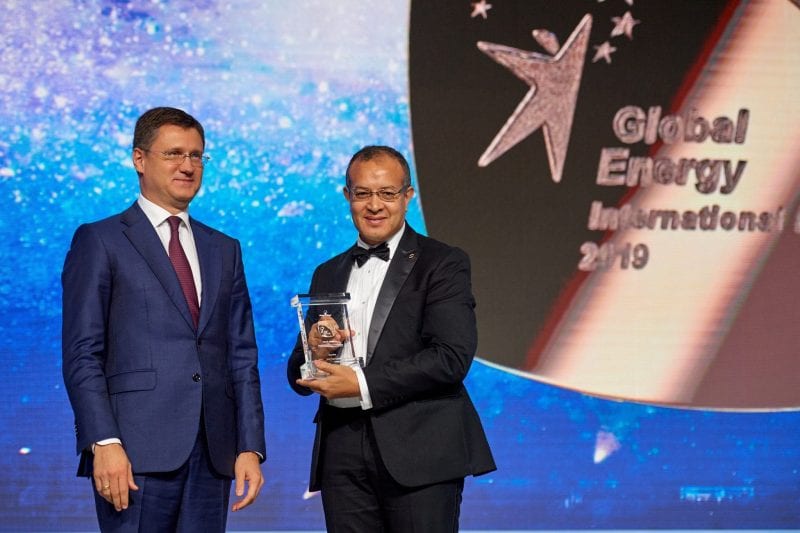 American doctor Khalil Amine, the most cited battery scientist in the world, is the author of advanced materials and battery systems for electric vehicles, electric power, satellites, military and medical industries. The scientist's technologies are used by the largest corporations in the world, including producers of consumer electronics and all manufacturers of vehicles with hybrid and electric motors. One of his latest innovations is a new superoxide battery close system capable of yielding up to five times more energy than lithium-ion batteries.

On receiving the Global Energy Prize, Khalil Amine called on the world community to promote the massive use of electric vehicles as the transport of the future. “The work I am recognized for with today’s prize is a small contribution to advance energy storage technology. I hope that my efforts will help accelerate mass electrification of vehicles by increasing their range and making them more affordable. Throughout my career, I have received many awards. However, the Global Energy Prize is by far the biggest in both prestige and recognition. Therefore, I will cherish it all my life,” he said.

Danish professor Frede Blaabjerg is widely known for the commercial implementation of new conceptual methods to ensure the reliability of power electronics for the electric power industry. He is responsible for a number of inventions in variable speed drive technology, which today are widely used in heating, ventilation and air-conditioning systems, for example. Enhancing the energy efficiency of such systems has resulted in energy savings of hundreds of millions of dollars a year.

Also, Frede Blaabjerg`s converters reduce the costs of energy generated by solar and wind power stations while enhancing the reliability of generators connected to power distribution networks. These designs allow for steady and reliable performance of large-scale power-supply systems.

“I started doing research in power electronics around 30 years ago. And it immediately became obvious to me that the developments in this area have potential applications like renewable generation, large-scale high-power transmission, adjustable speed drives for robotics, electrical cars, electric ships and so on using modern power electronic components,” Frede Blaabjerg said. “I want to thank the Global Energy Prize Award Committee for identifying me and highlighting that electrical power conversion and processing by means of power electronics is a key technology for a modern and more sustainable world.”