The MAXREFDES1199 reference design from Maxim Integrated Products demonstrates how to build a low-cost buck dc-dc converter using the step-down converter MAX17244 for 5Vdc output applications from a 12V to 32V input. This reference design delivers up to 2.5A at 5V. This design uses a two-layer board and minimizes component count to reduce cost.

The device can operate in dropout conditions by running at 98% duty cycle. Under light-load applications, the external sync pin FSYNC logic input allows the device to operate either in PFM mode for reduced current consumption or fixed-frequency FPWM (forced-PWM) mode to eliminate frequency variation to minimize EMI.

Recommended for you: 36V, 5A, High-Efficiency, Fast Transient, Non-Isolated, DC-DC with Integrated Inductor

This converter deliv­ers up to 2.5A and generates fixed output voltages of 3.3V/5V, along with the ability to program the output volt­age between 1V to 10V. This device is available in a com­pact 16-pin (5mm x 5mm) TQFN package with exposed pad and 16-pin TSSOP. 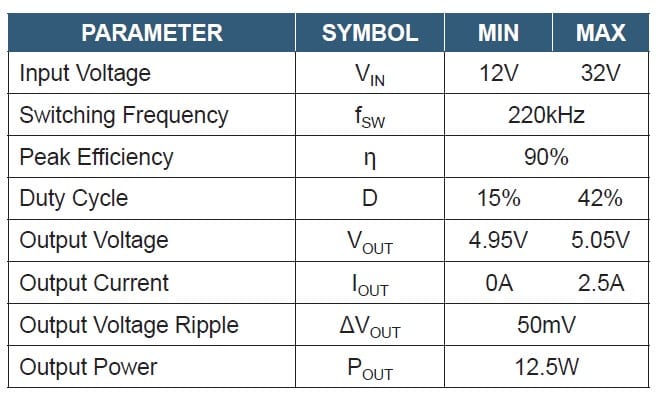 In low-voltage, high-current applications, synchronous buck converters are more efficient than conventional buck converters because synchronous converters use MOSFETs, rather than conventional catch diodes. As a result, the power they dissipate in off-periods is reduced significantly. In a steady state, the low-side MOSFET is driven to complement the high-side MOSFET. In other words, whenever one of these switches is on, the other is off. In steady state conditions, the complementary switch­ing of high-side and low-side MOSFETs regulates VOUT to its set value. 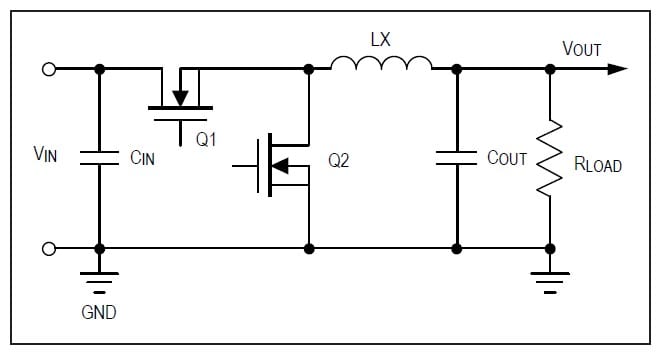 The synchronous rectifier switch is open when the main switch is closed and vice versa. To prevent cross-conduc­tion when both the top and bottom switches are on simul­taneously, a break-before-make switching scheme must be employed. A diode must continue to conduct during the interval between the opening of the main switch and the closing of the synchronous-rectifier switch (dead time).

When a MOSFET is used as a synchronous switch, the current normally flows in reverse (i.e., source to drain), which allows the integrated body diode to conduct current during the dead time. When the synchronous rectifier switch closes, the current flows through the MOSFET channel. Because of the low-channel resistance for power MOSFETs, the standard forward drop of the rectifying diode can be reduced to a few millivolts. Synchronous rectification can provide efficiencies well above 90%.

The MAX17244 offers a feature called PFM mode that disables negative inductor current and additionally skips pulses at light loads for high efficiency. However, these light-load efficiencies come at the expense of noise because the switching frequency is not fixed and is pro­portional to the load current.