A tiny microsupercapacitor (MSC) that is as small as the width of a person’s fingerprint and can be integrated directly with an electronic chip has been developed. This has attracted major attention as a novel technology to lead the era of Internet of Things (IoT) since it can be driven independently when applied to individual electronic components.

Through the study, Professor Sang-Young Lee and his research team in the School of Energy and Chemical Engineering at UNIST have unveiled a new class of ultrahigh areal number density solid-state MSCs (UHD SS–MSCs) on a chip via electrohydrodynamic (EHD) jet printing. According to the research team, this is the first study to exploit EHD jet printing in the MSCs.

A supercapacitor (SC) can store much more energy than ordinary capacitors. The benefits of supercapacitors include having high power delivery and longer cycle life compared to lithium-based secondary batteries. In particular, it can be produced as small as the width of a person’s fingerprint via semiconductor manufacturing process, and thus can be also applicable for wearables and internet of things (IoT) devices.

Because the heat produced in manufacturing process may cause deterioration of the electrical characteristics of the supercapacitor, it has been difficult to connect them directly to electronic components. In addition, the fabrication method that combines supercapacitors with electronic components via inkjet printing technique has also the disadvantage of lower precision.

The overall fabrication of on-chip UHD SS–MSCs. (click on image to enlarge)

The research team solved this issue using EHD jet printing, a high-resolution patterning technique in microelectronics. EHD jet printing uses the electrode and electrolyte for printing purpose similar to that of conventional inkjet printing, yet it can control printed liquid with an electric field.

“We were able to produce up to 54.9 unit cells per square centimeter (㎠) via electro-hydrodynamic jet printing technique, and thus the output of 65.9 volts (V) was achieved in the same area,” says Kwonhyung Lee (Combined M.S/Ph.D. of Energy and Chemical Engineering, UNIST), the first author of the study. 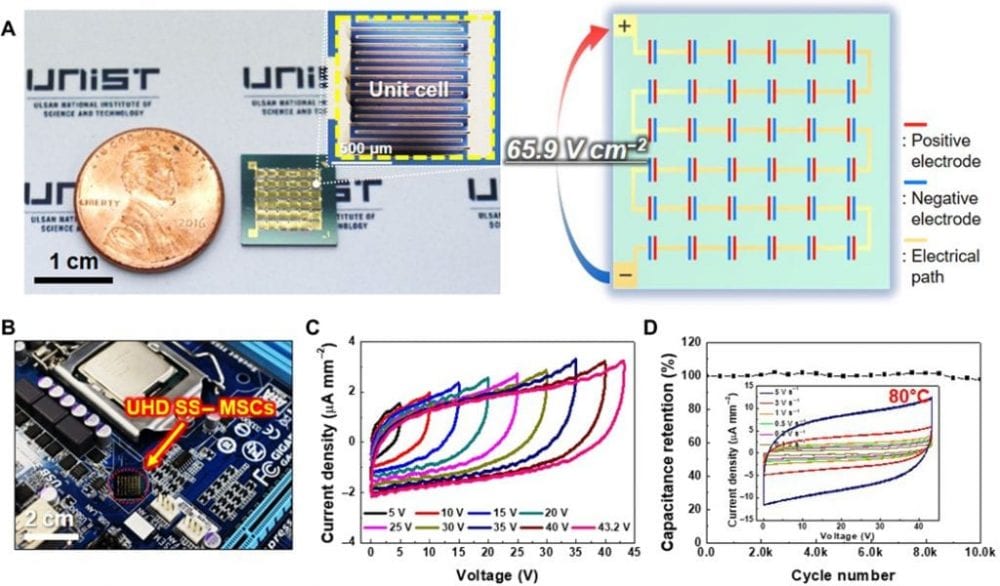 On-chip UHD SS–MSCs as a device-unitized power source. (click on image to enlarge)

The team also succeeded in fabricating 36 unit cells on a chip (area = 8.0 mm × 8.2 mm, 54.9 cells cm−2) and areal operating voltage (65.9 V cm−2) that lie far beyond those of previously reported MSCs fabricated by printing techniques. Besides, upon exposure to hot temperature (80°C), these cells maintained normal cyclic voltammetry (CV) profiles, and thus has proven they can withstand excessive heat generated during the operation of actual electronic component. In addition, these batteries can provide customized power supplies, as they can be connected either in series or parallel.

This study has been supported through the Mid-career Researcher Supporting Program by the Ministry of Science and ICT (MSIT, Korea) and the Industry Technology Development Program funded by the Ministry of Trade, Industry and Energy (MOTIE, Korea). The findings of this work have been published in the scientific journal, Science Advances on March 6, 2020.