Rechargeable lithium-ion (Li-ion) batteries or LIBs are an indispensable part of the electrifying society. Ideally, the batteries must demonstrate high capacity and power at an affordable cost. However, the lithium reserves are depleting, and lithium extraction is harmful to the environment. Therefore, manufacturing li-ion batteries are costly, and researchers are trying to substitute lithium with more abundant metals such as sodium, potassium and calcium. But it remains a challenge to achieve high performance and low cost simultaneously.

Researchers at Tohoku University are trying to reduce battery manufacturing costs and find a way to replace lithium with more widely available sodium ions. They have increased the number of active materials used to make a battery into a single cell, eliminating inactive materials such as separators used for packing multiple cells together. One possible way to achieve this without affecting the cell capacity is by using thicker electrodes. 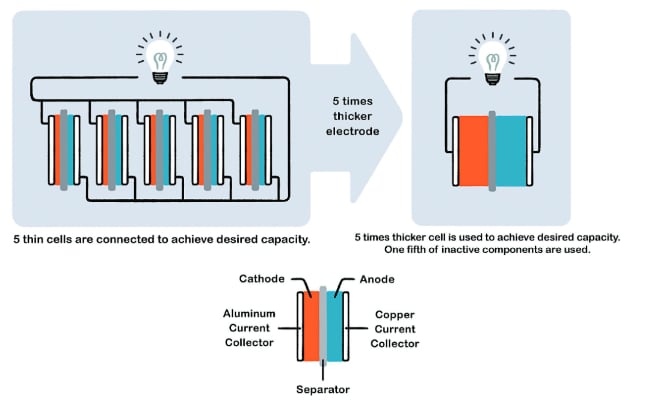 In their paper published in the journal Small, the team of researchers reported that a cell with five times thicker electrodes could reduce the number of inactive components to 1/5th, downsizing the overall size of the battery while saving 26.1% of the cost per battery. However, ions in a thick electrode will experience elongated pathways for diffusion, resulting in increased resistivity and deteriorating battery performance.

Tohoku University researchers have developed a way to fabricate micro-architected, high-performing anode electrodes. Their approach involves stereolithography (SLA) 3D printing to print micro lattice structures made of resin. SLA 3D printer solidifies photocurable resin to build objects. According to the researchers, this method is suitable as the photocurable resin can be shrunk by carbonizing them via pyrolysis without destroying the detailed printed architecture. 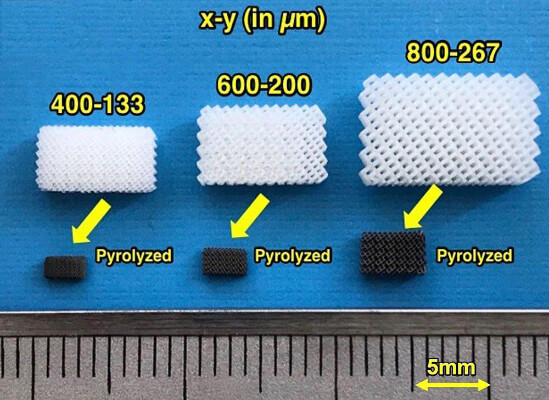 The researchers found that the developed 3D lattice structure allowed for fast transportation of ions. Moreover, precise control over the microarchitecture could increase the nominal thickness of the lattice structure and lead to efficient ion diffusion. Akira Kudo, a PhD student at the University of California Los Angeles, says that as 3D printers gain increasing resolution, sodium-ion batteries could eventually outperform lithium-ion ones.

Researchers across the globe have explored suitable electrodes for cost-effective sodium-ion battery chemistry. In sodium-ion batteries, the materials undergoing conversion reactions present high storage capacities and low operation potential, benefiting the energy density of these batteries. However, these reactions cause structural degradation of electrode materials, leading to fast capacity fading. Some potential choices, such as graphite, could not be used as electrodes as sodium intercalates in graphite and could lead to unstable behavior and induce safety concerns.

The new study suggests that the atomic structure formed after pyrolyzing photocurable resin is, in fact, hard carbon which does not intercalate very well into crystalline graphite. Therefore, the carbon micro-lattices may be promising as anodes in sodium-ion batteries.

Performance of the New Sodium-Ion Batteries

The researchers created carbon micro-lattices with a beam of 32.8um to reach an areal capacity of 21.3 mAh/cm2 at a loading of 98 mg/cm2 without degrading, which is significantly superior performance to conventional monolithic electrodes. They report that these results would advance the development of high-performing anodes for sodium-ion batteries and expand the utilities of promising 3D-printed carbon lattices.