The six farms, located off the coast of New York and New Jersey, could produce enough energy to power 2 million homes.

Seeking to further its commitment, together with the Departments of Energy and Commerce, to deploy 30 GW of offshore wind by 2030, the Department of the Interior on February 25 announced the close of its six-lease auction in the New York Bight.

The final tally? After two days of bidding, six companies collectively bid $4.37 billion for the right to develop farms across more than 488,000 acres in the area, which encompasses shallow waters extending from the coast of New Jersey to the eastern tip of Long Island.

The auction, first announced by Secretary of the Interior Deb Haaland on January 12, is the highest-grossing competitive offshore lease sale in the nation’s history. It comes in light of a report, released in October last year by the independent Special Initiative on Offshore Wind (SIOW), which found that the offshore wind industry represents a $109 billion revenue opportunity for industry players over the next decade. 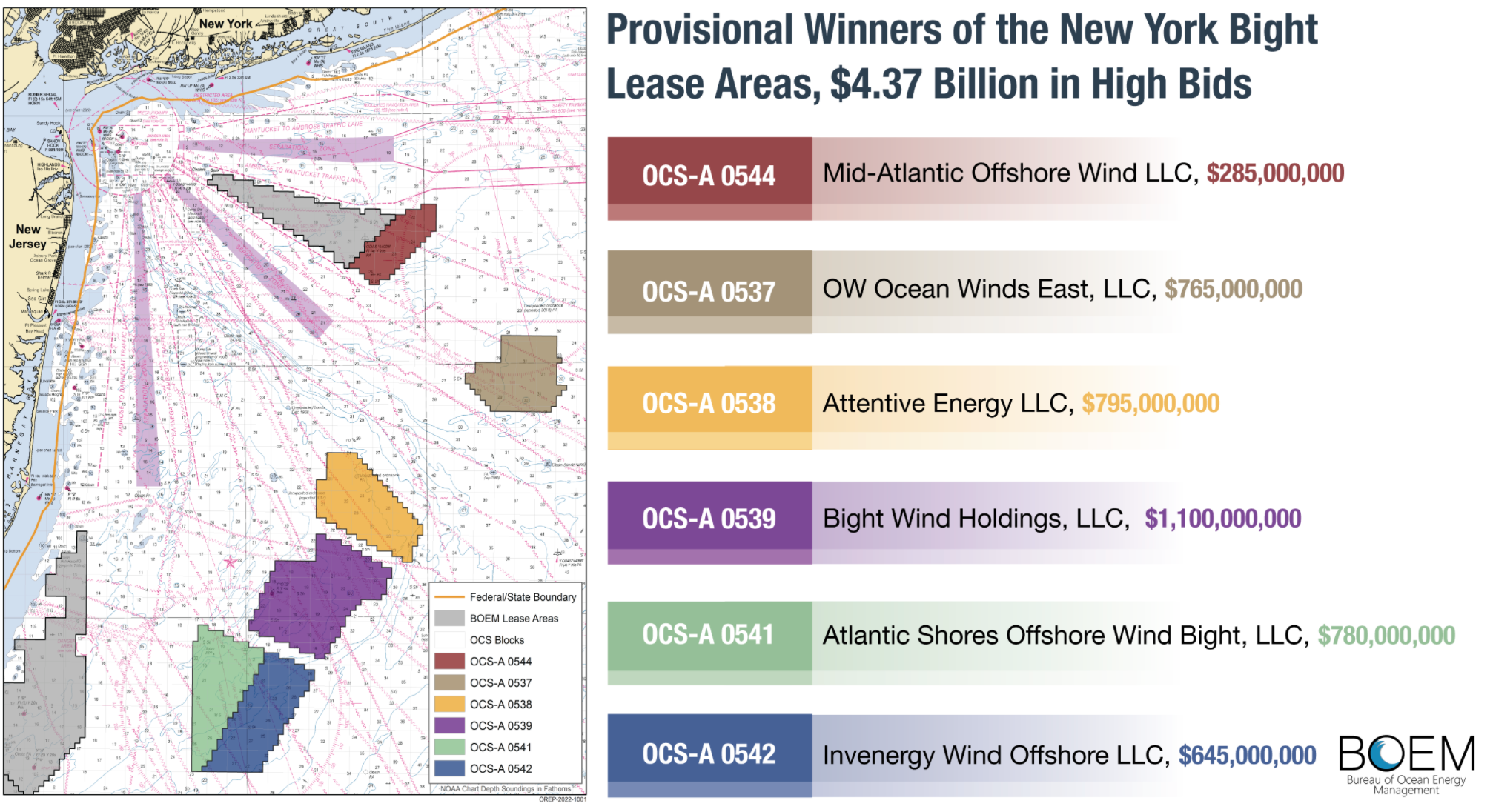 The BOEM kicked off the auction at 9 a.m. eastern on February 23. Screenshot used courtesy of the BOEM

“We are at an inflection point for domestic offshore wind development,” said Haaland upon the announcement in January. “We must seize this moment — and we must do it together.”

The Interior Department’s Bureau of Ocean Energy Management (BOEM) administered the auction, whose six leases also broke the record for the most held in a single event. The auction saw 64 rounds of bidding and included 25 separate businesses.

“This week’s offshore wind sale makes one thing clear: the enthusiasm for the clean energy economy is undeniable and it’s here to stay,” Haaland said.

The auction marks yet another expansion in wind farm development off the coasts of New York and New Jersey. Collectively, the states intend to install 16 GW of capacity by 2035, the most ambitious regional offshore wind target in the country.

Amongst the winners was Atlantic Shores, a joint venture partially owned by the oil and gas giant Shell, which bid $780 million for the right to the 79,351 acres of lease area OCS-A 0541. Last year, the New Jersey Board of Public Utilities awarded the company a contract to develop a 1.51 GW farm 10-20 miles off the state’s coast, between Atlantic City and Barnegat Light.

As for New York, the state’s 130 MW South Fork Wind project, which is planned for construction 35 miles east of Montauk Point and will provide enough energy to power nearly 70,000 homes, became just the second large-scale commercial offshore venture in the nation to be approved by the BOEM last November.

The State’s other initiatives include the Empire Wind 2 and Beacon Wind projects off the coast of Long Island, which once complete will provide enough energy to power 1.3 million homes. In preparation for rapid offshore wind growth, the state has also announced robust funding earmarked for port upgrades. 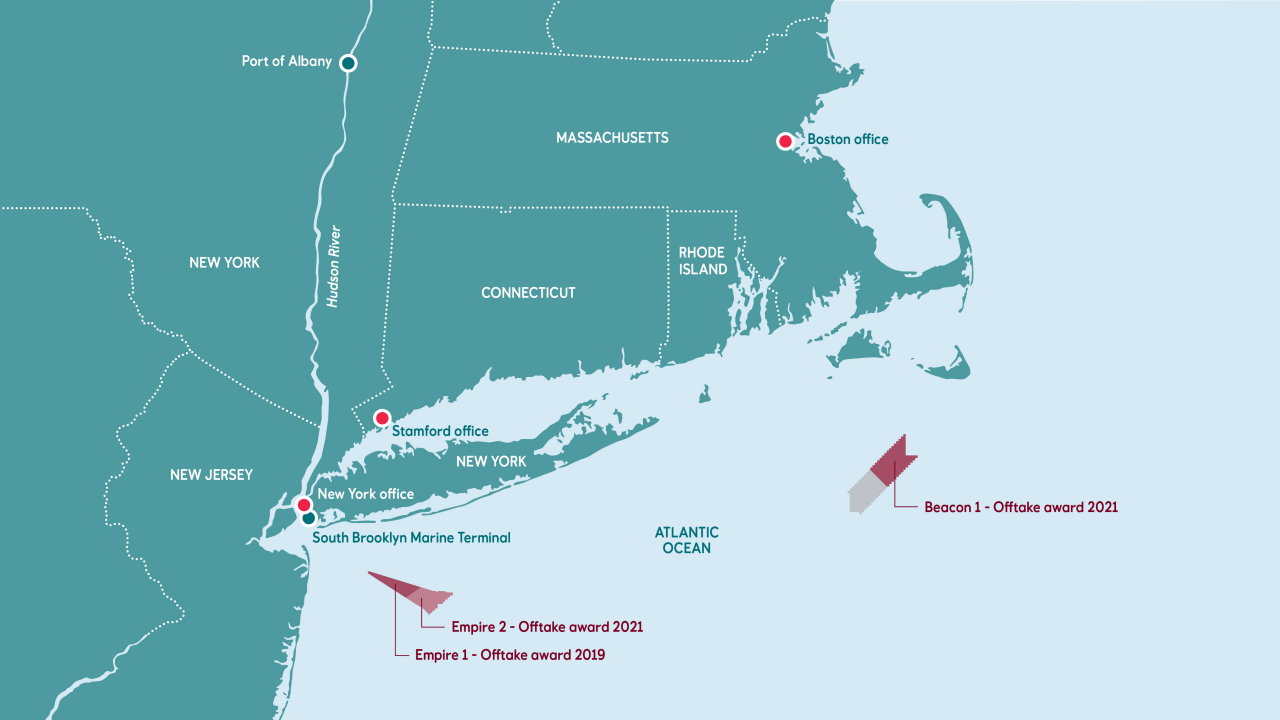 New York's offshore wind initiatives include the Empire 2 and Beacon 1 projects, among others. Image used courtesy of Equinor

“Here in New York, we are already living with the effects of climate change through extreme weather that poses a direct threat to our way of life,” said New York Governor Kathy Hochul in January. “We must chart an ambitious path toward a cleaner energy economy now more than ever, and today’s milestone further highlights New York’s commitment to reaching its offshore wind goals.”

In addition to the six areas it auctioned in February, which together could generate 5.6 to 7 GW of energy, the BOEM holds 12 more commercial offshore leases on the Atlantic Outer Continental Shelf (OCS), and plans to hold upwards of six more auctions for leases throughout the country between 2022 and 2025.

The BOEM plans to hold upwards of six more auctions through 2025. Screenshot used courtesy of the BOEM

The agency is also working to complete by 2025 its review of at least 16 plans to construct and operate commercial offshore wind facilities, which together could generate 19 GW of energy.

“We are working to facilitate a pipeline of projects that will establish confidence for the offshore wind industry,” said BOEM Director Amanda Lefton, in an October 2021 release detailing the agency’s vision.