Highview Power reported that it developed a modular cryogenic energy storage system, the CRYOBattery™, that is scalable up to multiple gigawatts of energy storage. According to the company, the technology, which can be placed almost anywhere, reaches a new benchmark for a levelized cost of storage (LCOS) of $140/MWh for a 10-hour, 200MW/2GWh system.

Highview Power contends that its cryogenic energy storage system has performance that equivalent to and could potentially replace a fossil fuel power station. The company's systems can also enable renewable energy baseload power at large scale while supporting electricity and distribution systems and providing energy security.

In addition, Highview Power announced that it won the 2019 Ashden Award for Energy Innovation with its proprietary CRYOBattery technology.

Unlike competing long-duration technologies, such as compressed air or pumped hydro-power, Highview Power says it CRYOBattery can be placed almost anywhere.

Even at multiple gigawatts, CRYOBattery has a small footprint and does not use hazardous materials.

"Long-duration technologies such as cryogenic energy storage will become increasingly necessary for an electricity system to transition from a primary reliance on conventional fossil fuel generation to a grid dominated by variable renewable generation from solar and wind," Alex Eller, senior research analyst with Navigant Research, said. 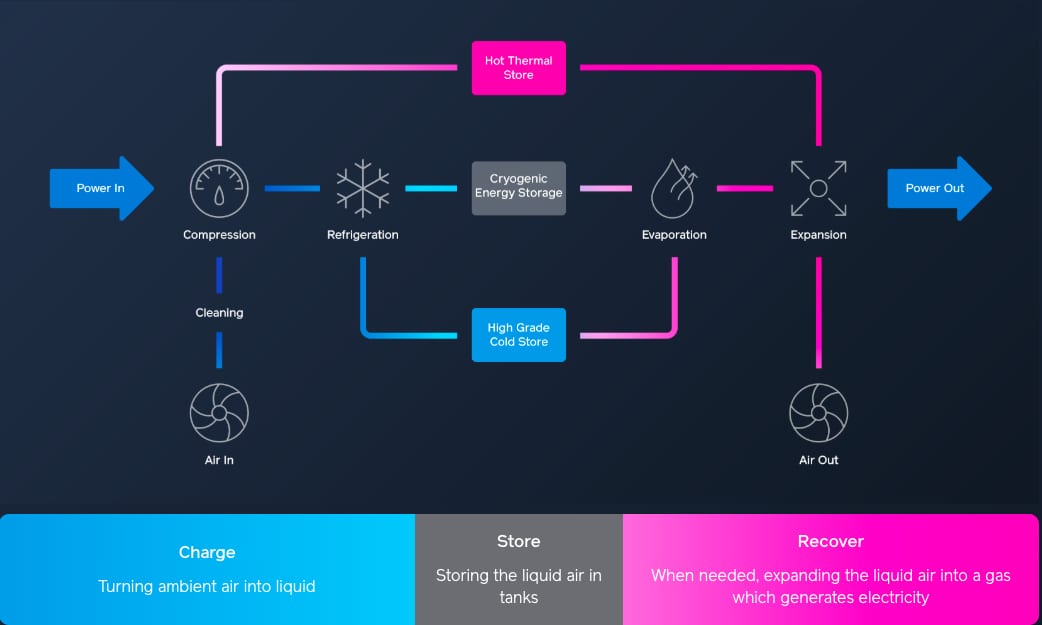 "This is a pivotal moment for the renewable energy industry and for anyone who wants to deploy large amounts of renewables," said Javier Cavada, president and CEO of Highview Power. "As more and more renewables are added to the grid, long-duration, giga-scale energy storage is the necessary foundation to make these intermittent sources of power reliable enough to become baseload. Not only does our CRYOBattery deliver this reliability and allow scalability—it is proven, cost-effective, and available today."

Cavada indicated that Highview Power's CRYOBattery can enable grid operators to maximize renewable penetration without having to use fossil fuel generation to make up for intermittency. "This makes replacing gas peaker power plants with a combination of solar, wind, and energy storage a viable reality and truly sets the stage for a future where 100% of the world's electricity comes from clean energy sources," he said.

Other locatable, long-duration energy storage technologies such as Lithium-ion typically offer from 4hrs to 8hrs of storage.

Over the last 15 years, Highview Power, through the design, construction, and operation of its CRYOBattery technology, has developed and optimized its own proprietary BLU™ core controller system. The system brings together Highview Power's knowledge and expertise in a complete facility management system. The company says that the BLU controller seamlessly integrates the control of all CRYOBattery components to deliver optimal facility performance, thereby managing the balance between flexibility, efficiency, and response.

With the selection of individual operational modes, the BLU controller allows a system to be configured to a particular application. It also gives operation and performance monitoring feedback, ensuring a facility's optimal efficiency. The system's embedded flexibility further assures that the controller has the built-in capacity to adapt to variations in a facility's demand due to market development.

"After looking at a number of storage technologies, we came to the conclusion that Highview Power's CRYOBattery is the ideal solution to deliver long-duration, large-scale storage services to our customers. The technology is not only cost-effective—it is scalable, clean, has a long lifespan, and can be deployed now," said Joaquín García Rico, CEO of TSK, a leading global engineering, procurement, and construction (EPC) company. Highview Power recently announced a joint venture with TSK to co-develop CRYOBattery projects in Spain, the Middle East, and South Africa.

Highview Power worked with Finland-based Citec to modularize its gigawatt-scale cryogenic energy storage system. With a simplified design and streamlined engineering from Citec, Highview Power says that a standard CRYOBattery configuration of 50MW/500MWh can be easily, and economically, scaled up to multiple gigawatt hours.