Although floating solar systems are an underutilized technology, some in the United States are taking advantage of its benefits.

Floating solar systems are an underutilized technology in the United States with only two percent of new solar installations being on the water. However, Transparency Market Research expects the global floating solar market to grow to $27.7 billion by the end of 2031 and there are myriad reasons why.

Fort Bragg is taking advantage of the many benefits of the technology as part of a $36 million U.S. Army energy savings contract with Duke Energy and Ameresco focused on energy resilience and security at Fort Bragg. The 1.1 MW floating solar system, owned and operated by Fort Bragg, is located at Camp Mackall, Fort Bragg’s training center for the Special Forces, on Big Muddy Lake. 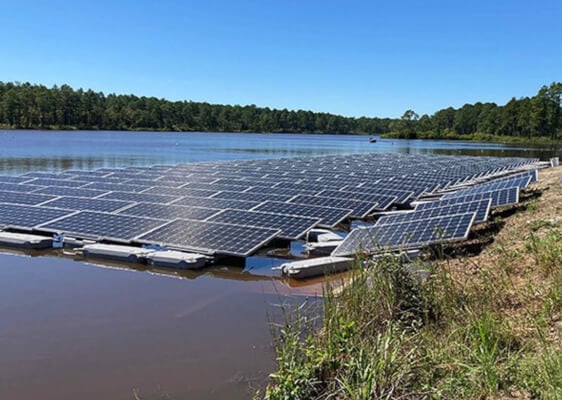 Putting solar arrays on the water has many benefits. Not only does the floating system satisfy the Army’s desire to utilize innovative technology, but it preserves their surrounding land, which is used for training, while providing renewable energy. As land becomes more scarce and the need for energy increases, floating solar will be imperative to the transition to renewable energy.

“We didn't have land available for traditional ground-mounted solar.  It was estimated we would need to clear seven acres for 1 MW of ground-mounted solar,” Audrey Oxendine, Chief of the Energy and Utilities Branch, Fort Bragg Directorate of Public Works, said in an interview with EE Power. “The lake surface area is 60 acres. The solar array is only 2.5 acres so the lake can still be used for recreational boating, fishing, etc. An ecological report prepared by the state of California indicates the solar panels will keep the area under it cooler for fish leading to fewer algae blooms.”

“The footprint of a floating solar array is roughly half the size of a ground system. So, in building this two-acre island, the Army saved essentially five-plus acres of their valuable land for conservation or other land uses and development,” Stetson Tchividjian, director of business development for D3Energy, LLC who helped build the project, told EE Power. 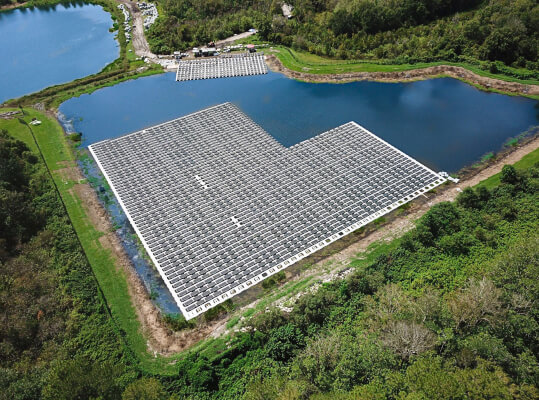 There are other benefits to floating solar. For example, the cooling effect of the water coupled with lower shading increases the efficiency of the panels. Having the arrays on the water increase panel efficiency, which varies between 5% and 20%, depending on the depth and temperature of the water.

Floating solar systems are not without challenges, however. The biggest is the anchoring system, which must be capable of withstanding strong wind loads. Rust is not an issue, though, as the racking system, which is what is in contact with the water, is entirely made of HDPE plastic and any electrical equipment that is submerged is marine grade.

According to Tchividjian, the benefits of floating PV cannot be overstated.

“While the CAPEX costs might be slightly more than a ground-mounted system, the lack of land costs, the increase in panel efficiency, and the lowered maintenance costs makes floating PV highly competitive,” he said.

The floating solar installation is being paired with a 2 MW Tesla battery energy storage system (BESS), and the system will supply power to Fort Bragg from the local grid and provide power during electric service outages. The maximum energy the Tesla battery stores is 2 MWh. The floating PV system produces about 3.6 MWh/day, so the PV and BESS together can provide about 10 to 12% of the site’s energy needs–equivalent to 200 to 240 gallons per day of diesel fuel for equivalent backup generation.

“The solar and battery system can be sequenced so the battery is providing power to the grid at different times throughout the day,” said Oxendine. “The battery can be charged and ready when Camp Mackall is experiencing peak energy rates. This can reduce costs even further by discharging the battery during those peak times.”

The combined PV/BESS system should be able to support about 100 kW to 200 kW for 24 hours depending on the load profile.