DOE Pours $3B into Transmission Lines, Energy Storage, and EVs

DOE Pours $3B into Transmission Lines, Energy Storage, and EVs

With its aggressive funding, the DOE will look to counter growing integration gridlock, ensure stability in the face of intermittent renewables, and catalyze an as yet sluggish shift to EVs.

The latest investments add to the DOE’s ongoing series of programs to boost the power grid and EV battery supply chain. You can read EE Power’s summary of those here.

An Aging Network, and a Growing Queue

With America’s aging transmission network in desperate need of upgrades, the DOE announced on May 10 a $2.5 billion revolving fund to help spur the construction of new and improved high-capacity lines across the U.S.

Dubbed the Transmission Facilitation Program, the initiative will use three financing avenues to incentivize new projects: loans, public-private partnerships, and capacity contracts with the DOE. Most notably, under the latter the DOE would agree to purchase up to 50% of a transmission line’s maximum capacity through 40 years, until market demand rises to cover the investment costs.

The DOE has estimated that over 70% of the nation’s transmission lines and power transformers are more than 25 years old. Other outside estimates show that over one-fourth of the grid is 50 years or older. 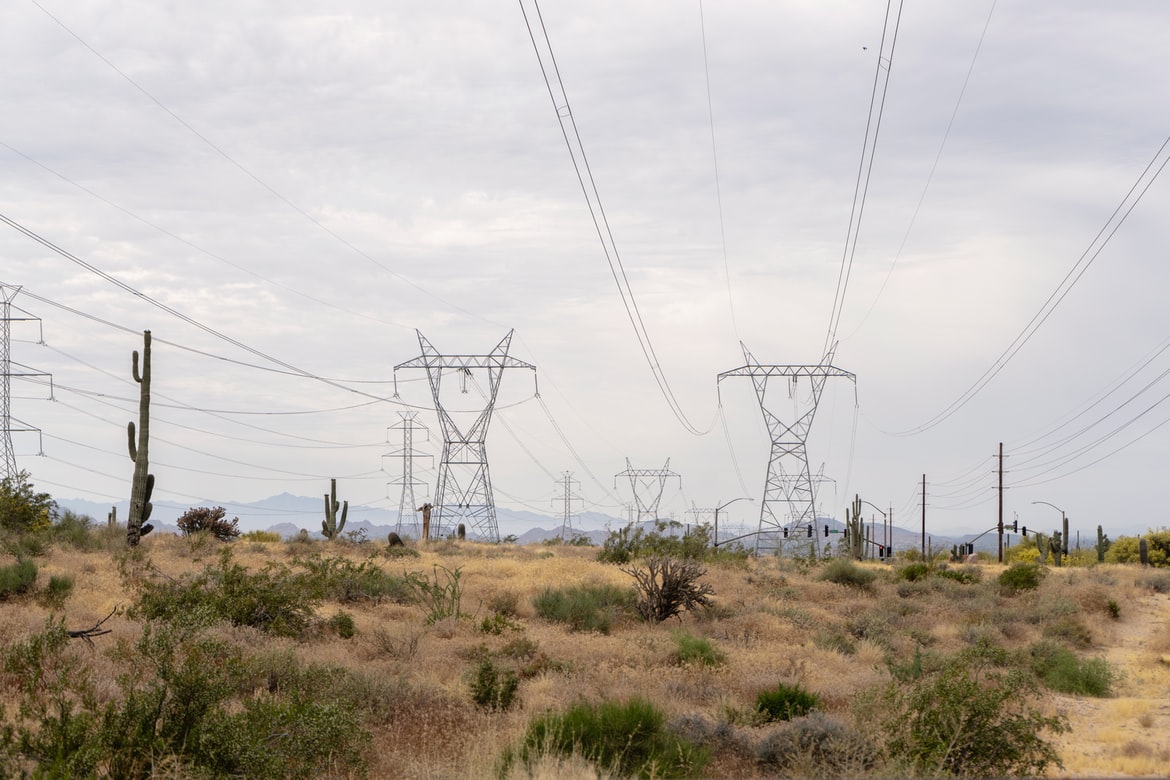 A fourth of U.S. transmission lines may be 50 or more years old. Image used courtesy of Denisse Leon/Unsplash

Further, the DOE’s announcement noted that in order to meet the increased demand for renewable power and electrification, the U.S. would need to expand its electricity transmission systems by 60% before 2030—or possibly even triple by 2050.

Yet, the construction of new high-voltage transmission lines fell from an annual average of 2,000 miles to just 700 miles over the last decade. Should that trend continue, the result will be intensifying gridlock.

According to a recent DOE report, the queue of power plants seeking interconnection access has now topped 930 gigawatts (GW) of solar, wind, hydropower, geothermal and nuclear capacity, plus another 420 GW in energy storage projects. For scale, that amount slightly exceeds the 1,175 GW of clean power capacity and storage needed to meet the White House's target of 80% clean electricity by 2030. 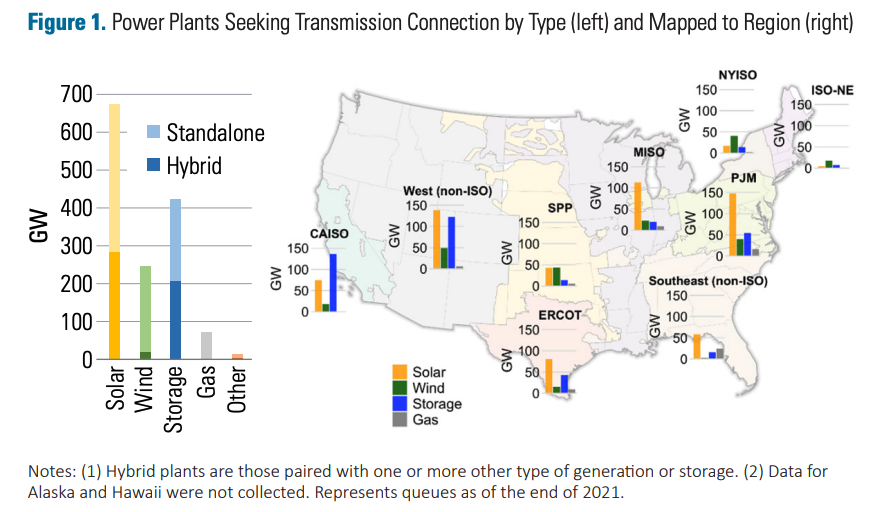 The extent of the queue for new transmission connections in the U.S. Screenshot used courtesy of the DOE

Through a request for information (RFI), the DOE is currently seeking stakeholder feedback on the implementation approach for the program.

On May 12, the DOE also unveiled a $505 million initiative encompassing three programs to focus, over a period of four years, on validating grid-scale long duration energy storage (LDES) systems and removing broader barriers preventing technology adoption in the marketplace.

Called the “Long Duration Energy Storage for Everyone, Everywhere Initiative,” the program aims to lower costs and extend the duration of energy storage resources to spur commercial deployment in the space. The DOE said that LDES systems, which it defines as capable of storing energy for over 10 hours at a time, would improve efficiency when energy generation is unavailable or falls short of demand.

Overseen by the DOE’s newly-formed Office of Clean Energy Demonstrations, the initiative will fund multiple energy storage projects. The first designates $355 million for field demonstrations in utility-scale energy storage, along with pilot grants to cover the cost of energy storage investments among states, tribal nations, universities, utilities and energy storage providers. Another $150 million will fund the validation of LDES demos capable of providing at least 10 hours of rated power as confirmed by third-party testing.

Per analysis from McKinsey & Company, a management consulting firm, industry players would need to see a 60% reduction in costs for LDES investments to be cost-optimal. The DOE’s own target is more ambitious — as part of a broader program announced last summer, called the Energy Earthshot Initiative, the Department hopes to reduce the cost of storage to 5 cents per kilowatt-hour by 2030, a 90% decline from 2020 levels.

“The ability to move cheaper, cleaner electricity where and when it is needed most is the linchpin to a reliable energy grid,” said U.S. Secretary of Energy Jennifer Granholm, in a written statement. “[This] initiative leverages the expertise of the Department, National Labs, and industry to drive next-generation energy storage—making solar power available when the sun isn’t shining and keeping wind energy on tap when there’s no breeze.”

Stakeholders have until June 16 to answer the DOE’s RFI.

With EVs struggling to gain traction in the U.S., the DOE’s Advanced Research Projects Agency-Energy (ARPA-E) in early May launched its Electric Vehicles for American Low-Carbon Living (EVs4ALL) program, earmarking $45 million to support the domestic development of advanced EV batteries. 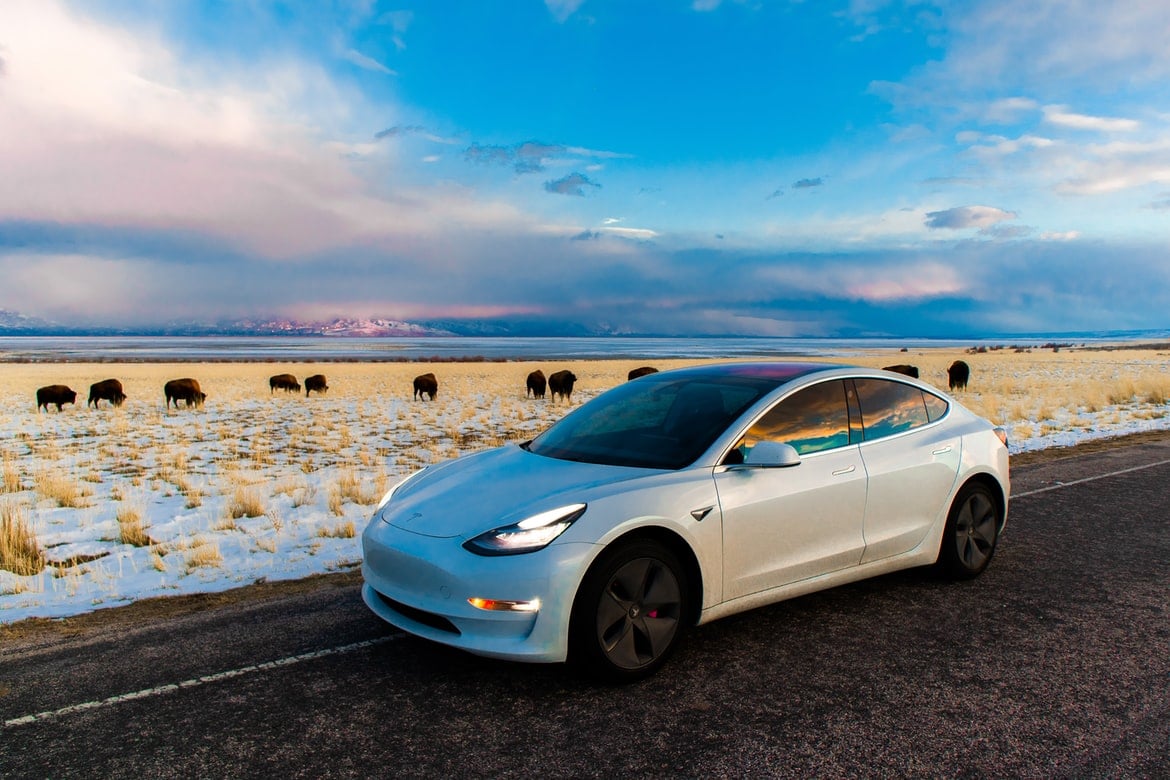 Despite robust sales for automakers such as Tesla, EV adoption in the U.S. has been slower than in comparitive markets. Image used courtesy of Taun Stewart/Unsplash

EVs4ALL aims to eliminate barriers to EV adoption by funding fast-charging systems, efficient batteries capable of withstanding cold temperatures in northern states, and efforts to extend mileage for long-distance traveling. Specifically, the program seeks proposals involving batteries capable of reaching 80% charge in five to 15 minutes, reducing low-temperature performance losses by at least 50%, and retaining a minimum of 90% capacity after delivering 200,000 miles of equivalent and cumulative range.

Per the agency's funding opportunity announcement, EVs4ALL’s individual awards could range from $1 million to $6 million. Concept papers are due on June 16, though the full submission deadline has yet to be announced.