Yesterday, Energy Secretary Rick Perry announced the U.S. Department of Energy's launch of a Lithium-Ion Battery Recycling Prize and the founding of a related Battery Recycling R&D Center. This work aims to recover and recycle crucial materials (such as cobalt and lithium) from lithium-based battery technology in consumer electronics, energy storage, defense, and transportation applications.

"America's dependence on foreign sources of critical materials undermines our energy security and national security," said Perry. "DOE will leverage the power of competition and the resources of the private sector, universities, and the National Laboratories to develop innovative recycling technologies, which will bolster economic growth, strengthen our energy security, and improve the environment."

Materials such as lithium and cobalt used in lithium-based batteries are both expensive and dependent on foreign sources for production. The President's Executive Order 13817 identifies the need for "developing critical minerals recycling and reprocessing technologies" as part of a broader plan to "ensure secure and reliable supplies of critical minerals." 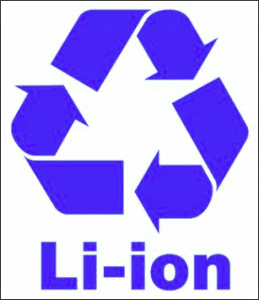 The goal of U.S. Department of Energy's Battery Recycling Prize and R&D Center is to develop technologies to profitably capture 90% of all lithium-based battery technologies in the United States. Currently, lithium-ion batteries are collected and recycled at a rate of less than 5%.

The Battery Recycling Prize is intended to encourage U.S. entrepreneurs to find innovative solutions for collecting, storing, and transporting discarded lithium-ion batteries for eventual recycling. Cash prizes totaling $5.5 million will be given to contestants in three progressive phases meant to accelerate the development of solutions from concept to prototype and then to a demonstration.

The announcement, made at the Bipartisan Policy Center's American Energy Innovation Council, also includes a $15 million investment to establish a Lithium Battery R&D Recycling Center focused on cost-effective recycling processes to recover lithium battery materials. The Center will be led by Argonne National Laboratory along with the National Renewable Energy Laboratory and Oak Ridge National Laboratory.