An intelligent junction box with voltage and current synchronization can help eliminate range anxiety in EVs while making the vehicles more affordable.

Engineers designing battery-management systems (BMS) for EVs have to balance cost and performance. Having accurate measurements of voltage, temperature, and current, are paramount to achieving the highest estimation of the state of charge or state of health of every battery cell in the system. 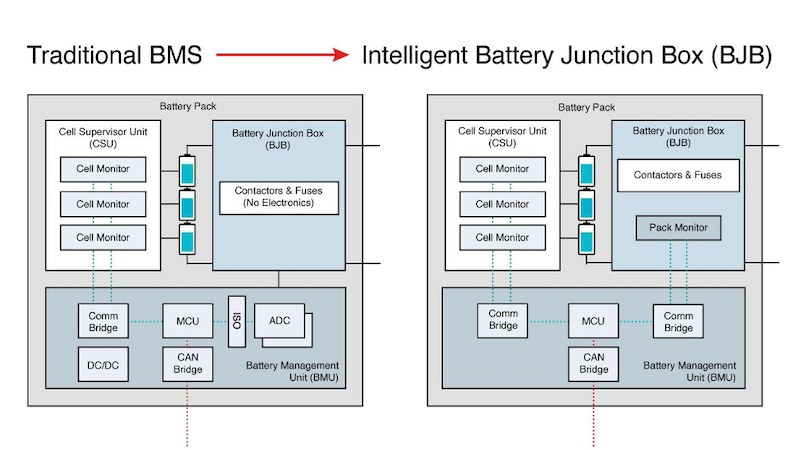 In Figure 1a, you have the battery management unit (BMU) or battery control unit (BCU). A BMU typically has a microcontroller (MCU) that manages all functions within the battery pack. The light blue block is the BJB. It is a relay box or a switch box with big contactors connecting the entire battery pack to the load inverter, motor, or charger.

Figure 1a shows the traditional BMS. In this configuration, there are no active electronics inside of the junction box; it is just passive contactors and fuses. All measurements in the BJB are measured at the BMU. There are wires connecting the BJB to the analog-to-digital converter (ADC) terminals.

Figure 1b shows the intelligent BJB. In this concept, a dedicated pack monitor inside the box measures all voltages and currents and passes the information to the MCU using simple twisted-pair communication. The main benefit of an intelligent BJB is that it eliminates numerous connections between the BMU and the BJB.

Why is this important? It is because an intelligent BJB: 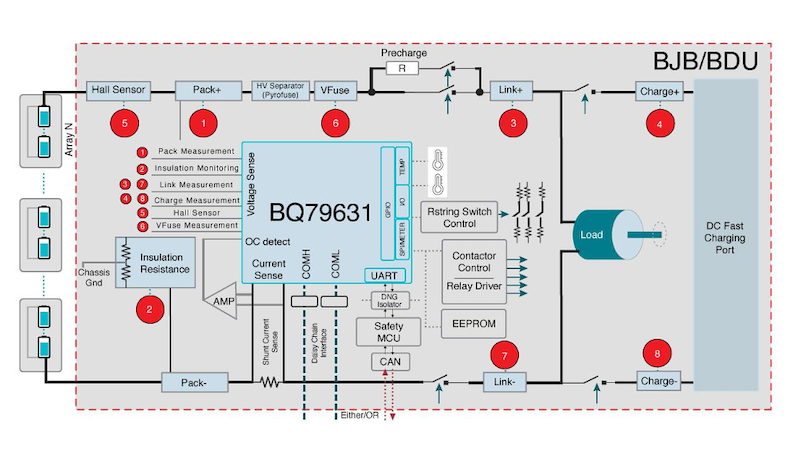 Inside the BJB, temperature measurements monitor:

A hall-effect sensor: Its dynamic range is typically limited and not capable of covering a few hundreds of milliamperes to kiloamperes. Thus, sometimes there are multiple sensors in the system to measure the entire range. Hall-effect sensors primarily measure the current through a coil or a device lead frame by measuring the magnetic field generated by the flow of current through the conductor, however, this makes them inherently susceptible to electromagnetic interference. However, you can place these sensors anywhere in the system, and they are inherently providing an isolated measurement.

Voltage and current synchronization is the time delay that exists to sample the voltage and current between the pack monitor and cell monitor. These measurements are mainly used for battery monitoring and calculating the state of charge, health, and power.

Many EVs can measure instantaneous power when drivers accelerate or when charging the battery pack.

The cell voltage, pack voltage, and pack current must be time-synchronized to provide the most accurate power and state of charge estimations. Taking samples within a specific time interval is called the synchronization interval. The smaller the synchronization interval, the more accurate the power estimate or the impedance estimate. The more accurate the state-of-charge estimation, the more mileage drivers get. The error of non-synchronized data is proportional, which means that a 1% error in the estimate of the state of charge directly translates to a 1% shorter range for the EV.

What are the requirements for synchronization?

Next-generation BMSs will require synchronized voltage and current measurements in less than 1 ms. The cell monitor and pack monitor need to report all of the samples, cell voltages, pack voltages, and pack currents to the BCU within 100 ms.

And what are the challenges in meeting these requirements?

All cell supervisor units can synchronously measure the cell voltages using a single conversion mode. These TI battery monitors also support delayed ADC sampling to compensate for the propagation delay when transmitting the ADC go command down the daisy-chain interface.

The massive electrification efforts happening in the automotive industry are driving the need to reduce the complexity of BMSs by adding electronics in the junction box while enhancing system safety. A pack monitor can locally measure the voltages before and after the relays, the current flowing in and out of the battery pack, and the insulation resistance to detect low-impedance paths between the battery pack and the chassis ground or low-voltage systems. The accuracy improvements in voltage and current measurements will directly result in optimal utilization of a battery.

Effective voltage and current synchronization enable precise state-of-health, state-of-charge and electrical impedance spectroscopy calculations that will result in optimal utilization of the battery to extend its life and increase driving ranges.