In the Journal of Applied Physics, from AIP Publishing, researchers at the University of Florida, the U.S. Naval Research Laboratory and Korea University provide a detailed perspective on the properties, capabilities, current limitations and future developments for one of the most promising UWB compounds, gallium oxide (Ga2O3).

Gallium oxide possesses an extremely wide bandgap of 4.8 electron volts (eV) that dwarfs silicon's 1.1 eV and exceeds the 3.3 eV exhibited by SiC and GaN. The difference gives Ga2O3 the ability to withstand a larger electric field than silicon, SiC and GaN can without breaking down. Furthermore, Ga2O3 handles the same amount of voltage over a shorter distance. This makes it invaluable for producing smaller, more efficient high-power transistors.

"Gallium oxide offers semiconductor manufacturers a highly applicable substrate for microelectronic devices," said Stephen Pearton, professor of materials science and engineering at the University of Florida and an author on the paper. "The compound appears ideal for use in power distribution systems that charge electric cars or converters that move electricity into the power grid from alternative energy sources such as wind turbines."

Pearton and his colleagues also looked at the potential for Ga2O3 as a base for metal-oxide-semiconductor field-effect transistors, better known as MOSFETs.

"Traditionally, these tiny electronic switches are made from silicon for use in laptops, smart phones and other electronics," Pearton said. "For systems like electric car charging stations, we need MOSFETs that can operate at higher power levels than silicon-based devices and that's where gallium oxide might be the solution."

To achieve these advanced MOSFETs, the authors determined that improved gate dielectrics are needed, along with thermal management approaches that will more effectively extract heat from the devices.

Pearton concluded that Ga2O3 will not replace SiC and GaN as the as the next primary semiconductor materials after silicon, but more likely will play a role in extending the range of powers and voltages accessible to ultrawide bandgap systems. 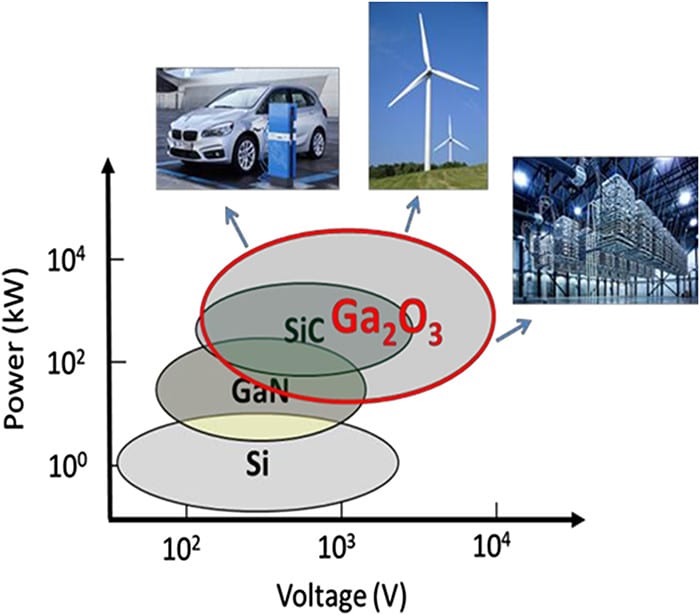 "The most promising application might be as high-voltage rectifiers in power conditioning and distribution systems such as electric cars and photovoltaic solar systems," he said.