Electric vehicle (EV) naysayers believe that lithium-ion batteries can’t be recycled, which couldn’t be further from the truth. They envision a future with landfill sites covered by spent battery packs leaking toxic chemicals into the environment. This is complete nonsense as the materials that make up a lithium-ion battery pack, including aluminum, copper, nickel, cobalt, and lithium itself, are valuable commodities that can and will be recycled from battery packs that have reached the end of their lives.

That’s not to say that lithium-ion battery recycling is particularly easy. The lithium-ion pack in a typical EV can weigh between 500 and 1,000 pounds and they are not designed to be easily disassembled. Conventional recycling methods require physically shredding the battery cells and subjecting the resulting material to chemical processes like hydrometallurgy or high-temperature pyrometallurgy to extract and recover valuable electrode materials. 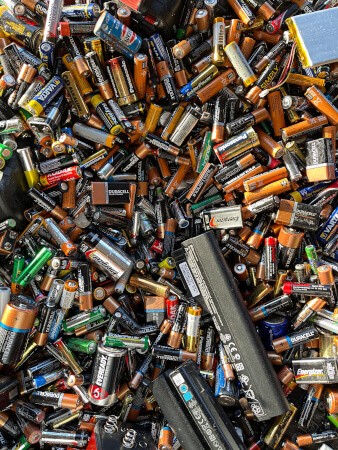 A collection of old batteries ready for recycling. Image used courtesy of Unsplash

Hydrometallurgy is a chemical leaching process used to extract and separates cathode metals below 100 °C. It can be used to recover lithium and copper, and other transition metals but requires the use of caustic reagents such as hydrochloric, nitric, sulfuric acids, and hydrogen peroxide, all of which create environmental issues.

Separating the metals from the liquids used to recover them has proven challenging. A Japanese startup called Emulsion Flow Technologies (EFT) has developed an extraction process that they say is 100 times faster than conventional approaches.

According to EFT, “Solvent extraction is a method of separating and refining substances. It can be used to selectively extract a target component by utilizing the distribution of substances between two liquid phases that do not mix.”

The two liquid phases, in this case, are a frothy blend of oil and water that form an emulsion.

In contrast, the process developed by EFT requires only one process, creating a flow that carries away cobalt, nickel, and other metals in a watery solution on tiny droplets of oil. The droplets coalesce quickly, allowing the metals to be collected.

According to EFT, the process attains 99.99% purity for the extracted metals—this is a level of purity that allows them to be directly used to make new batteries. EFT has found the key emulsion flow is to make the droplet sizes uniform so the oil coalesces quickly.

The EFT emulsion flow process was discovered accidentally in 2010 when Hirochika Naganawa, working as a researcher for the Japan Atomic Energy Agency, found emulsions could be used to retrieve specific elements from radioactive waste. EFT was established in April 2021 and Naganawa is now the Chief Technology Officer of the company. 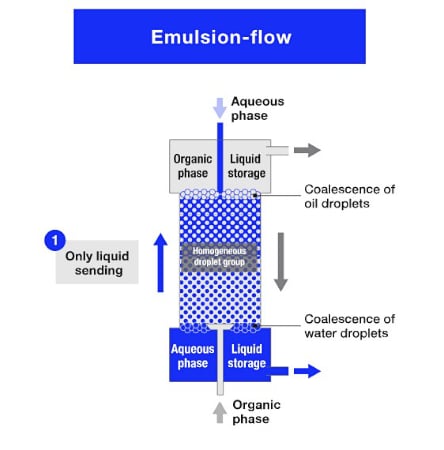 Recycling lithium-ion batteries is just getting started—until now, the volume of spent battery packs from EVs and other sources has not been high enough to make an economically viable business case. That is rapidly changing as EVs are becoming more popular worldwide. As recycling becomes more popular a variety of new technologies, such as the emulsion flow extraction developed by EFT, will continue to improve the process.