The new transmitter and receiver pair can charge high-end smartphones in as little as 30 minutes. 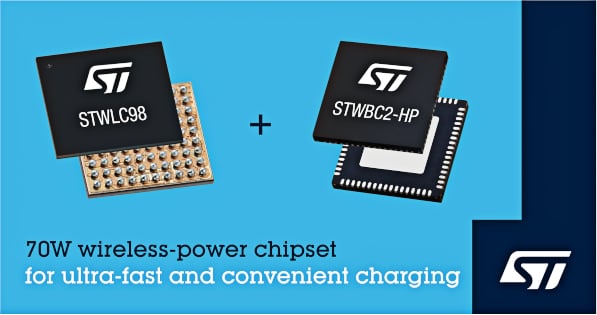 The STWLC98 power receiver is compliant with the ubiquitous Qi EPP 1.3 wireless charging standard. The device is controlled by a 32-bit Arm Cortex-M3 core that comes with an embedded OS that eases the task of  Qi 1.3 standalone certification. The STWBC2-HP supports the company’s ST Super Charge (STSC) protocol, which serves to make possible the power transfer rate of 70W for the fastest possible charging. This transmitter can also work with ST’s STSAFE-A110 secure element to store official Qi Certificates. This important feature is purposed to provide authentication, facilitating the utilization of state-of-the-art cryptography.

ST’s Adaptive Rectifier Configuration (ARC) mode changes the entire surface of the STWLC98 into a usable charging area. This will not only increase the ping-up distance by up to 50% in all directions, but will also enhance the power transfer spatial freedom of the system in both the vertical and horizontal directions, and will do so with no changes in either hardware or coil optimization.

The STWLC98 can also operate as a wireless transmitter with up to 15W output. This feature, which does depend on the coil employed, allows for high-power charge sharing between devices. It also includes an embedded Q-factor detection facility to ensure safe operation in transmitter mode. The device features an extremely low standby current, with an overall transmitter to receiver power transfer efficiency of better than 90%

The STWBC2 -HP is a digital controller that is purposed to driving the DC-DC stage and the half-or full-bridge inverter stage of a Qi wireless battery charging transmitter (TX). Its front end can work with DC inputs ranging from 4.1 to 24V. The device supports both single and multi-coil topologies.

The device includes an embedded STM32G071 MCU, which itself features ARM Cortex-M0+ CPU which can include up to 128K of flash memory and up to 32K of SRAM. The clock frequency is up to 64 MHz. It also embeds a 12-bit ADC, two 12-bit DACs, and a USB-PD controller.

Communications interfaces include UART, I2C with speeds as high as 1 Mb/sec, SPI of up to 28 Mb/sec as well as up to 8 GPIO pins. Security is enhanced by the device’s 96-bit unique ID.

The fast-charging pair will serve a range of flexible charging applications in:

Users of The STWLC98 and the STWBC2-HP can employ the company’s ST Wireless Power Studio, a no-cost, PC-based graphical tool. With this package, OEMs can accelerate design-in and simplify processes such as the tuning of Q-factor detection, tightening up communication diagnostics, and improving foreign object detection (FOD).