Below, we’ll dive further into the background technology underlying this new release, rather than provide a full specification overview. For those interested in such specifications, including details concerning capacitances and working voltages available at each case size, details are available in NIC Components’ datasheet.

Capacitors store electrical charge. The devices have two plates—one stores a positive charge, and the other a corresponding negative.

The value of a capacitor is expressed in farads, and is defined as the electrical charge stored (measured in coulombs) divided by the voltage across the two aforementioned plates. Electrolytic capacitors employ various types of electrolyte between the plates, which serve to vastly increase their capacitance.

Readers who’d like a deeper review of these concepts can check out EE Power’s comprehensive Capacitor Guide.

Engineering components to be as small as possible is critical in modern electronic design, where saving space and weight are of utmost importance. Here, per NIC statistics offered in its press release announcing the series, NSPE-HC products offer a significant advantage.

NIC’s latest offerings pack more capacitance into smaller packages than do competing devices. For example, a 25-VDC NSPE-HC device sized at 10 x 10.8 mm sports a capacitance of 470 µF, while like-products from NCC and Panasonic offer just 390 and 330 µF, respectively. Just the same, NIC’s 35-VDC, 10 x 10.8 mm device packs in 330 µF, while offerings from the same two competitors are each specced at 270 µF.

NIC defines the members of its new series specifically as hybrid construction SMT aluminum electrolytic capacitors. What this means, as described by Panasonic in an article published by Mouser, is that the electrolyte is composed of a combination of liquid and polymer. 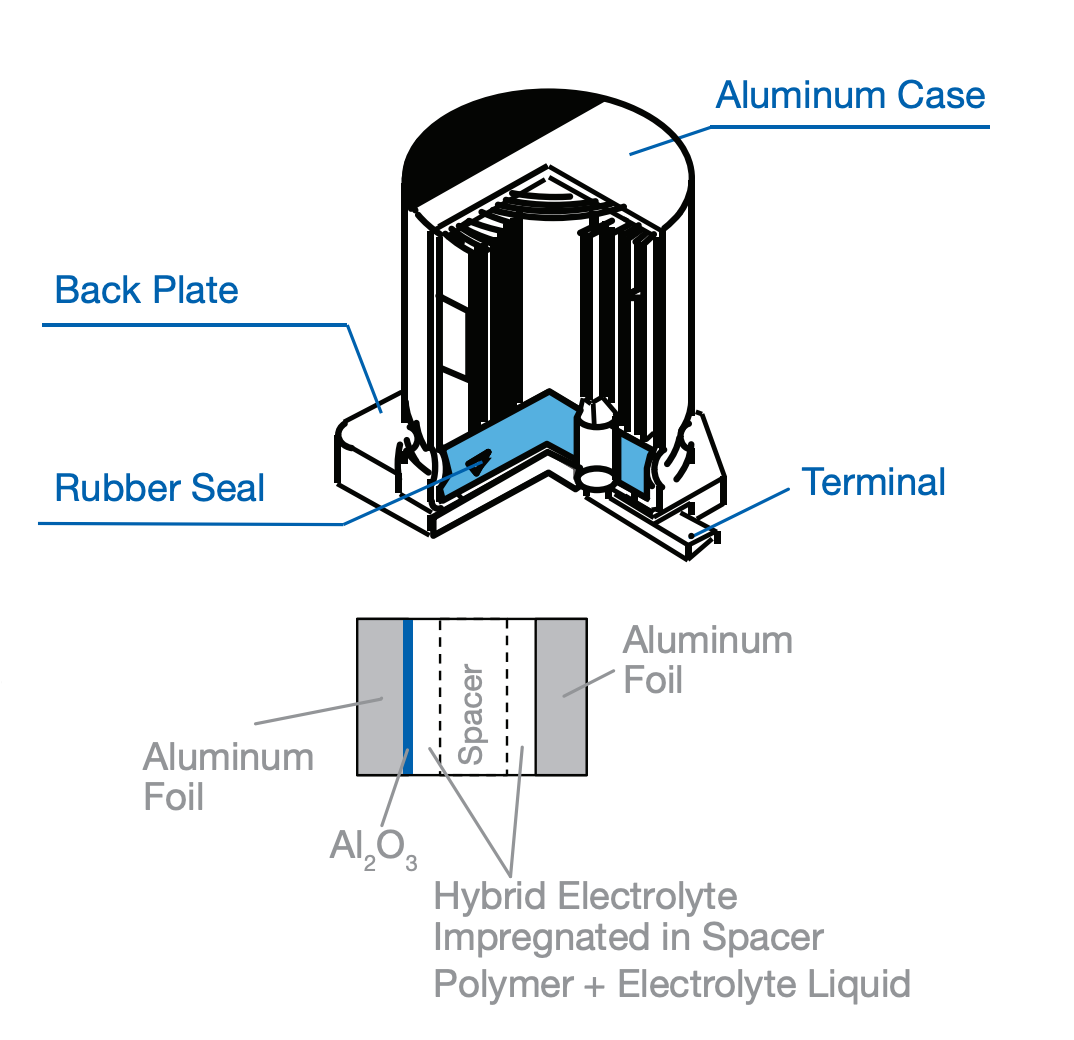 The polymer offers high conductivity, which makes for low internal equivalent series resistance (ESR).   The liquid portion allows not only for higher capacitance values, but also for “self-healing” from wear caused by electrical or mechanical stresses the capacitors may encounter during their working life.

In many of their applications, electrolytic capacitors will be subjected to high AC current flows. This current is defined as the ripple current. Members of the NSPE-HC series can handle up to 4 amps AC at 100 KHz at a temperature of 105 ℃.

Equivalent series resistance (ESR) is the AC resistance offered by a capacitor. In circuit diagrams, it is represented by a resistor in series with a capacitor. Since power is equal to current squared times resistance (I2R), a smaller ESR will mean that less destructive power will be wasted in the capacitor.

Members of the NSPE-HC series are RoHS and REACH–compliant, as well as halogen-free.

NSPE-HC series capacitors are compliant with AEC-Q200. Per its site, the automotive electronics council (AEC) was originally devised by Chrysler, Ford, and GM for the purpose of “establishing common part-qualification and quality-system standards.” Membership has now been extended to additional domestic and international players. The standard is extensive, and is of vital importance to any organization manufacturing or utilizing automotive electronic components.