WASHINGTON—Dec. 31, 2019—The Semiconductor Industry Association (SIA) today announced worldwide sales of semiconductors reached $36.7 billion for the month of November 2019, a decrease of 0.3 percent from the previous month’s total and 10.8 percent lower than the November 2018 total of $41.1 billion. Monthly sales are compiled by the World Semiconductor Trade Statistics (WSTS) organization and represent a three-month moving average. SIA represents U.S. leadership in semiconductor manufacturing, design, and research, with members accounting for approximately 95 percent of U.S. semiconductor sales.

“As 2019 winds down, global semiconductor sales continue to lag behind last year’s total, but we’ve begun seeing indications of the modest rebound projected for next year,” said John Neuffer, president and CEO, Semiconductor Industry Association. “Regionally, the Americas market was the only major market to grow on a month-to-month basis, but sales into the Americas were down substantially year-to-year.” 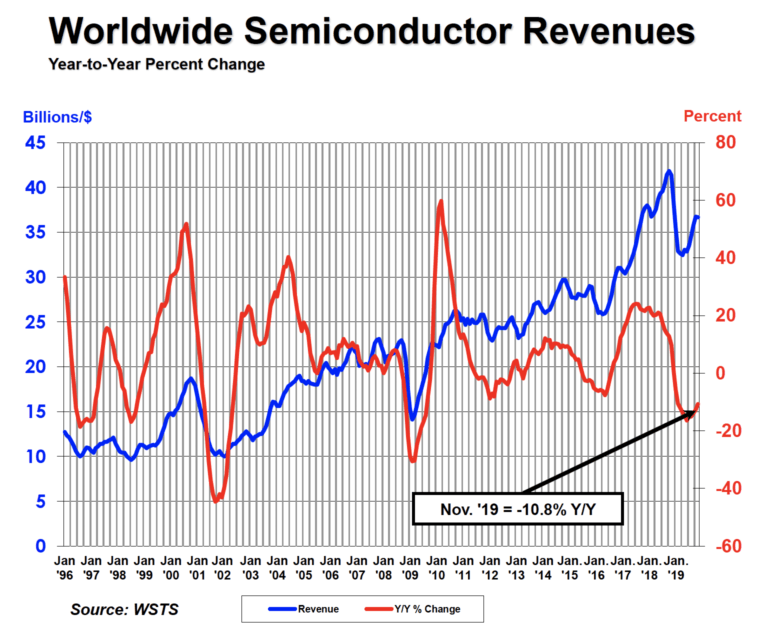 Since 1977, the Semiconductor Industry Association (SIA) has been the voice of the U.S. semiconductor industry, one of America’s top export industries, and a key driver of America’s economic strength, national security, and global competitiveness.