The devices are devoted solely to self-powering and to charging energy storage elements such as super-capacitors or batteries.

The new devices from E-Peas are the AEM10900 and AEM10300 and the AEM30300. The former two harvests available solar energy and the AEM30300 avail themselves of ambient RF and vibrational energy. 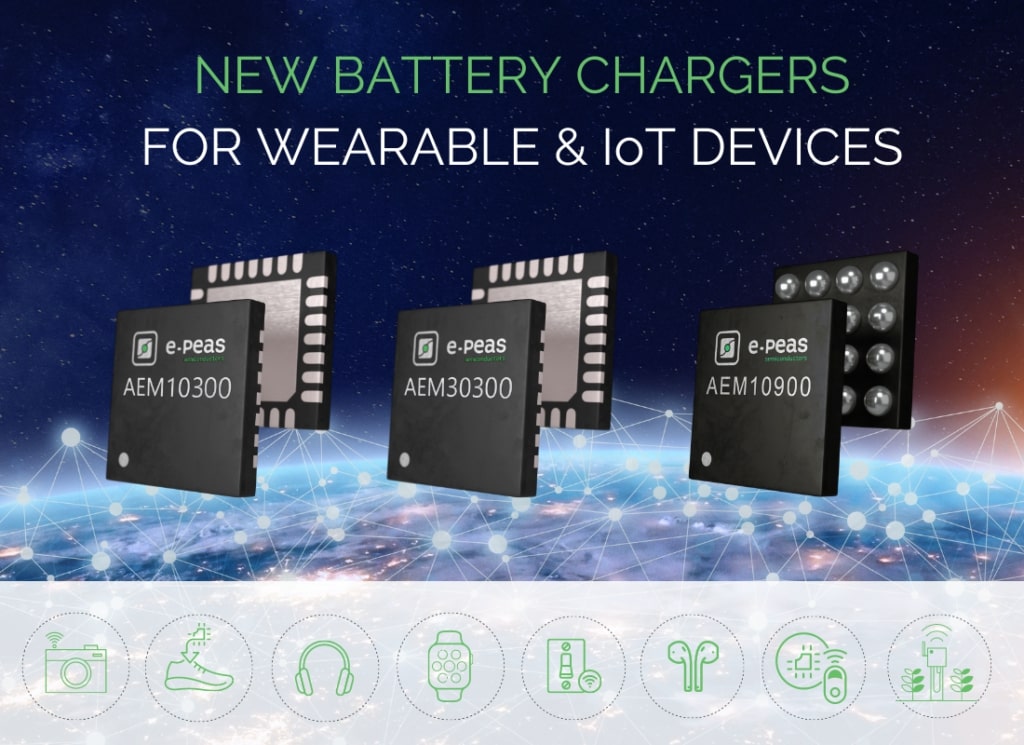 The new units are solely devoted to powering their own operation and for charging energy storage elements such as lithium-ion batteries (LiB) or supercapacitors. This is in contrast to the E-Peas PMICs that we previously covered, which were also designed to also provide direct power delivery to OEM applications.

The change makes for a smaller, less expensive solution when such considerations are most vital. It also allows for the units to draw zero quiescent currents from the energy storage element when energy harvesting stops for an extended period of time.

The company currently boasts a wide array of PMIC devices, and the three new devices, which require only three external passive components, will serve OEMs who need to keep the BOM cost low and save critical board space.

As stated by Geoffroy Gosset, CEO and co-founder of E-Peas, “As e-peas’ business matures and we continue to gain ever greater commercial traction, we must look to provide a more expansive portfolio of PMIC options to the market.” He goes on to explain that “Following on from in-depth consultations with our customer base, it became clear that having compact solutions for charging only was going to be of real value. With these newly introduced devices, we will now be able to better serve the wearable, healthcare, consumer, and industrial sectors, supporting them with technology that fully meets their needs in terms of performance, size, and price point.”

The device is designed to work with a single-cell photovoltaic panel. Its power point tracking (MPPT) functionality is optimized to work with objects in motion so that it garners the most possible energy from all available ambient illumination. Because it has a 250 microvolt cold start ability, it can begin to do its job of gathering and storing energy even when light intensity is low.

The AEM10900’s I2C interface serves to not only keep the pin count low but also to offer more choices of potential configurations. Features include an actual joule counter, which can serve to tell users just how much solar energy the device has succeeded in capturing.

Also optimized to work with light energy, the AEM10300 employs MPPT and works with an input voltage range from 100 microvolts up to 4.5 volts.

This device has the ability to automatically switch between boost, buck-boost, and buck operation in order to maximize the transfer between the source and the wide variety of storage elements noted in the image above.

Applications for The AEM10300 are:

The AEM30300 is an RF energy harvesting battery charger featuring a cold start capability from -19 dBm and can accept input power up to 10 dBm. The device features a DC/DC converter operating from 100 mV to 4.5 volts

The applications E-Peas lists for the AEM30300 include:

E-Peas has announced that evaluation boards will be available shortly for all three devices.