9A Low Side Silicon Carbide MOSFET and IGBT Driver

9A Low Side Silicon Carbide MOSFET and IGBT Driver

Desaturation detection circuitry detects an over current condition of the SiC MOSFET and initiates a soft turn off, thus preventing a potentially damaging dV/dt event. The logic input is TTL and CMOS compatible; this input does not need to be level shifted even with a negative gate drive bias voltage.

You may also like: Testing GaN Devices to Failure Demonstrates Robustness Unmatched by Si Power MOSFETs 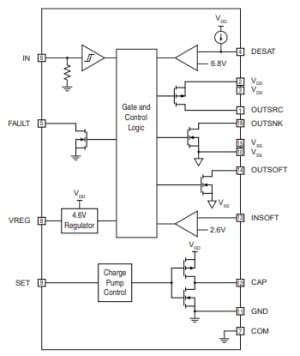 Protection features include UVLO and thermal shutdown detection. An open drain FAULT output signals a fault condition to the microcontroller.

The IX4351NE is rated for operational temperature range of -40°C to +125°C, and is available in a thermally enhanced 16-pin power SOIC package.