If only there were a fusion reactor that not only made its own tritium fuel from lithium but also produced enough excess for a tidy profit.

The Holy Grail of energy production is fusion. The sun does it by combining two hydrogen atoms to produce helium and a huge amount of excess energy. The idea that has been popular since the 1940s is that if we could replicate that same process on earth, we would have a nearly infinite supply of zero-emission energy. On December 5, 2022, a team at Lawrence Livermore National Laboratory (LLNL) conducted the first controlled fusion experiment to reach scientific energy breakeven, meaning it produced more energy from fusion than the laser energy used to drive it. After decades of unfulfilled predictions of limitless power, fusion is suddenly looking a lot more promising.

In theory, fusion reactions can occur for a variety of elements, but scientists prefer working with fuels that are easy to produce and store. For this reason, two hydrogen isotopes called deuterium and tritium have become the fuel of choice. The combination can undergo a fusion reaction at lower temperatures than other elements and is expected to release more energy when the fusion reaction occurs.

The tritium isotope of hydrogen has one proton, one electron, and two protons. When deuterium and tritium undergo a fusion reaction, they produce a helium nucleus containing two protons and two neutrons while also releasing a great deal of energy and an energetic neutron. The energy can be used to convert water into steam to power a turbine and generator to create electricity. 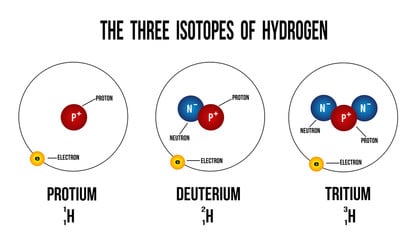 Tritium, with a half-life of 12 years, decays relatively quickly and so is rare in nature. It is possible, however, to create tritium by exposing the element lithium to energetic neutrons. Most current plans for practical tritium-deuterium fusion reactors call for a tritium breeding blanket using lithium.

First Light is developing a projectile fusion approach to commercial fusion power. The approach compresses the fuel inside a target that is then struck by a projectile moving at an extremely high speed. A large two-stage hyper-velocity gas gun launches a projectile at 6.5 kilometers per second into the fusion fuel target. As the fuel implodes at over 70 kilometers per second, the desired fusion reaction occurs. Although the company has claimed to have achieved a fusion reaction, and the U.K. Atomic Energy Authority (UKAEA) has validated the result, it is unclear how much excess energy was required to produce the reaction.

Beyond the problem of requiring more energy than it creates, the hope is that if First Light could create a sustained fusion reaction, it would be possible to create excess amounts of tritium. Tritium is the fourth most valuable substance on earth. For $30,000 per gram, the 60-megawatt (MW) fusion reaction plant planned by First Light for $570 million should be capable of producing an excess of around 2 kilograms of tritium per year—a handy $60 million per year source of income outside of the sales of electricity produced from the heat of the fusion reaction.

The Future of Fusion

For most of the past 50 years, the promise of fusion was said to be just a decade away. Now that it has been shown that more energy can be released than it takes to create a fusion reaction, progress may be made at a faster pace, and alternative concepts, like those presented by First Light, will have their chance in the limelight.