Switched-mode power supplies (SMPS) are known to achieve voltage or current regulation by combining switches with energy storage elements. This technology was initially introduced in the 20th century, first using mechanical switches, vacuum tubes and finally semiconductor-based switches. The size of the storage elements is proportional to the energy storage requirement which is determined by the converter power requirement and operating frequency. Thus, increasing the converter operating frequency allows it to reduce the size of the energy storage elements which directly has an impact on the converter volume, power density and cost. This can be achieved by the use of wide bandgap (WBG) semiconductor devices. Read on to learn more about the applications of WBG based semiconductor devices specifically in automotive applications.

The important power devices that can be found in any electric or hybrid vehicle are as shown in Figure 1. The main inverter is a key component in the car and it controls the electric motor while capturing the energy released through regenerative braking giving it back to the battery. The electric motor employed can be synchronous, asynchronous or brushless DC. In EVs, the DC-DC converters are tasked with providing a low voltage to the power system bus by converting it from a high voltage battery [1]. The auxiliary inverter or converter supplies power that is derived from the high voltage battery to several auxiliary systems such as air conditioning, electronic power steering, oil pumps and cooling pumps.

The battery management system controls the battery state during charging and discharging. This can be performed in a smart way so that the lifetime of the battery can be extended. As the age of the battery increases, cell usage needs to be optimized by balancing the performance during charging and discharging cycles. In this scenario, the on-board battery charger plays a crucial role since it allows the battery charging from a standard power outlet. This is deemed to be an additional requirement for the designers since different voltage and current levels shall be supported by the same circuit [2]. A provision for future capabilities such as bidirectional power transfer also needs to be provided. The best part is that the SiC based devices can efficiently replace the silicon based devices for implementing all of these functionalities. 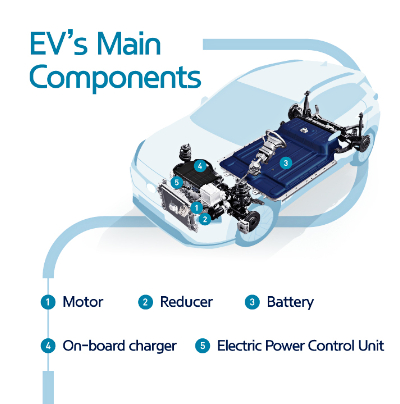 Power electronics such as traction inverters, DC boost converters and on-board battery chargers are critical elements in hybrid and electric vehicles (EVs). The energy efficiency can be affected in two critical ways - directly through switching and other losses, and indirectly by adding volume and weight to the vehicle [1]. WBG based inverters are known to reduce both the direct and indirect losses by operating at higher switching frequencies, efficiencies and temperatures. By employing SiC based traction inverters, an improvement in energy efficiency has been predicted for representative hybrid EVs. Even larger energy savings is possible by increased drivetrain electrification. Also, the efficient, lightweight and low cost DC fast charging infrastructure that is enabled by WBG converters will advance the commercial viability and adoption rate of EVs. In conjunction with a cleaner electricity generation portfolio, this has the potential to significantly reduce the one quarter of total US greenhouse gas emissions that stem from the transportation sector [1].

The automotive applications require electric motors with increasingly compact size and increasingly higher performance. The motor driver circuits have traditionally been silicon semiconductor based and exhibit increasing difficulties in meeting these kinds of stringent requirements [3]. The silicon technology is in fact reaching its theoretical limits with restrictions concerning power density, breakdown voltage and switching frequency which in turn impacts the power losses. The main effects of these limitations are manifested mainly in a sub-optimal level of efficiency. To this, there are added potential problems especially in operation at high temperatures and high switching rates.

Switching losses are greater than the conduction losses with cascading effects on overall power losses when silicon based power devices are operated at high frequency. In order to dissipate the excess heat that is produced, it is necessary to use a suitable heat sink. This comes with the disadvantages of increase in cost, higher overall device weight and excessive footprint. In contrast, the GaN based devices are deemed to offer superior electrical characteristics and serve as alternatives to the conventional MOSFET and IGBT transistors in high voltage and high switching frequency motor control applications [4]. As the switching frequency increases, the switching losses of a GaN based transistor is significantly lower than that of a silicon based conventional semiconductor device.