What are Overcurrent Protection Devices?

What are Overcurrent Protection Devices?

Learn about the basics of overcurrent, how it occurs, and ways to protect against and prevent it in power circuits.

To have a properly operating circuit, current flow should be confined to a safe level. This safe level of current is determined by the current handling capability of the load, conductors, switches, and other system components. Under normal operating conditions, the current in a circuit should be equal to or less than the normal current level. However, at times an electrical circuit may have a higher-than-normal current flow (overcurrent).

With a short circuit situation, the current takes a shortcut around the normal path of current flow.

Although a partial short can increase the current level, it may or may not cause damage depending on the ratings of the circuit components. However, with a dead short, the resistance of the load will be completely removed from the normal current path. This is illustrated in Figures 1a and 1b. 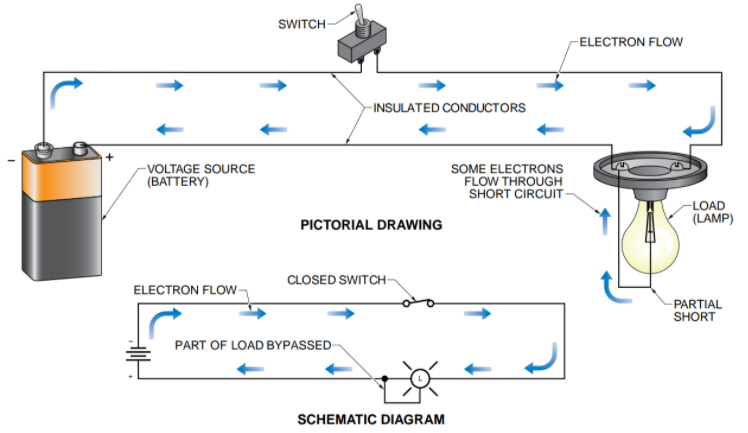 Figure 1a. A partial short circuit. 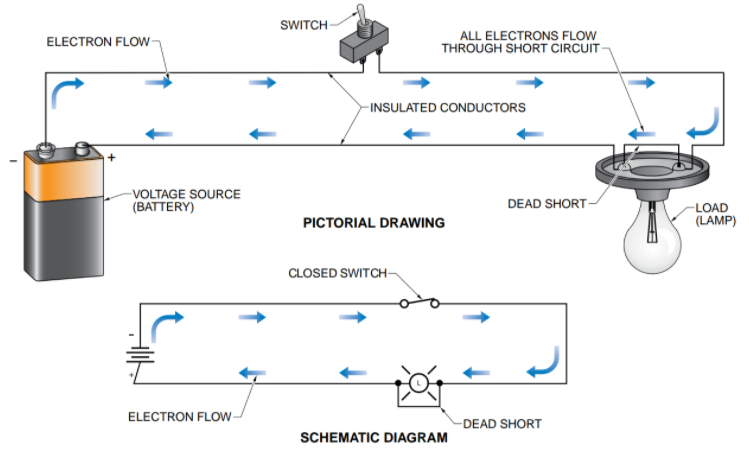 Figure 1b. A dead short circuit.

If the source has enough stored energy when a dead short occurs, circuit components can be damaged or explode. Switches can melt or vaporize, conductors can overheat, and the insulation can burn off. It can also damage the power source.

Fires that result in a loss of property and life can occur due to the temperatures generated by a partial or dead short. With so much at stake, all circuits must be protected against short circuit situations.

An overcurrent condition can also be caused by an overload situation. For example, consider a situation where too many loads are connected to a given power source. Even with each of these individual loads drawing their normal current, the overall current can exceed the rated value of the source.

If an overload only lasts for a brief time, the temperature rise is minimal and has little or no effect on the equipment or conductors. Sustained overloads, however, are destructive and must be prevented.

Unlike short circuits, overloads do not cause a sudden arc and the system might survive an overload situation even if we do not remove it from the system immediately. Though, over an extended period of time, overloads may cause a fire by overheating the equipment and conductors.

Figure 2 depicts an overloaded circuit. In this case, the rated current capacity of the branch is 15 A; however, the sum of the currents drawn by the parallel loads is 17 A. The circuit is overloaded by 2 A and, as a result, the breaker trips.

The resistance of a fuse or circuit breaker is very low and usually an insignificant part of the total circuit resistance. Under normal circuit operation, it simply functions as a conductor.

Fuses and circuit breakers are both connected in series with the circuit they protect. In general, these overcurrent devices must be installed at the point where the conductor being protected receives its power; for example, at the beginning of a branch circuit, as illustrated in Figure 3. 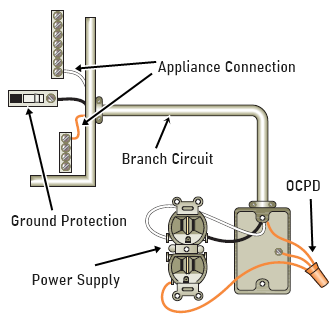 In the event of an overcurrent situation, fuses will blow or circuit breakers will trip. Although these devices protect the circuit against overcurrent conditions, they only open the circuit and disconnect the supply of electricity. They are not normally capable of correcting the problem. For this reason, we’ll need to locate and correct the problem before replacing a fuse or resetting a circuit breaker.

An overcurrent protection device (OCPD) is a piece of electrical equipment used to protect service, feeder, and branch circuits and equipment from excess current by interrupting the flow of current.

Figure 4 shows two common fuses used in a control circuit board: the plug-in fuse and the glass (Buss) fuse. These types of fuses can also be found on the secondary side of a transformer. 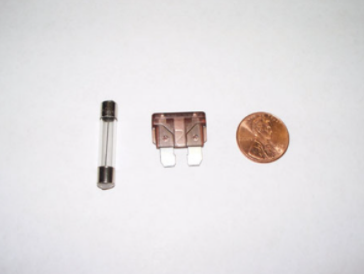 Figure 4. Plug-in fuses are used to protect a circuit board from overcurrent conditions. A glass fuse can be used as a plug-in fuse or in a fuse holder. (Penny included for size reference.)

Figure 5 shows a circuit board with the plug-in U-type fuse. 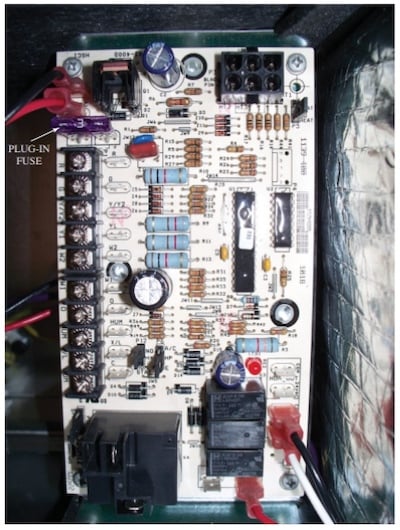 Figure 5. This is a circuit board for an air handler with an option for electric heat strips. Notice the 3 A plug-in fuse located at the upper left side of the circuit board.

Breakers or fuses of the correct amperage and voltage rating should be within easy access of the heating system. Typically, the breaker is the same rating as the maximum amperage listed on the nameplate of the electrical heating unit.

The installing contractor may need to analyze the amperage values of an installation to apply the correct size breaker. In some instances, a breaker of 115% of the unit’s “minimum” amperage may be specified.

An excessively large breaker should not be used. A breaker is designed to protect the equipment and wire. A breaker of too much amperage will not turn off the electrical supply in the event of an overcurrent draw. A breaker that is too small will turn off the power before the maximum current is drawn by the unit.

A fusible link (see Figure 6) is often wired in series with an electrical heating element. The purpose of the link is to open when either high amperage or high heat is encountered. 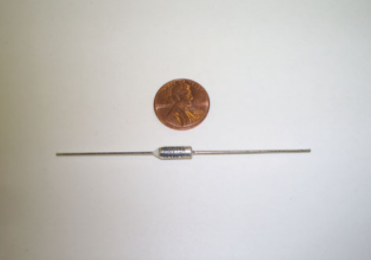 Figure 6. This common fusible link is found in series with a heating circuit.

The fusible link cannot be reset and must be replaced if open. The cylinder is silver and has manufacturer information printed on it. The information may include temperature and amperage ratings. The cylindrical device has one square end and one tapered end. The taper may be black or red, depending on the color of the material used in its manufacture. The link resistance can be checked to determine if it is open (it should exhibit a resistance of zero ohms).

Fuses and circuit breakers are rated for both current and voltage.

The continuous-current rating marked on the fuse or circuit breaker represents the maximum amount of current the device will carry without blowing or tripping open. The current rating must match the full-load current of the circuit as closely as possible. For example, undersized fuses blow easily, while oversized fuses may not provide enough protection.

The voltage rating of a fuse or circuit breaker is the highest voltage at which it is designed to safely interrupt the current. Specifically, the voltage rating determines the ability of the device to suppress the internal arcing that occurs when a current is opened under overcurrent or short-circuit conditions. The voltage rating must be at least equal to or greater than the circuit voltage. It can be higher but never lower. Low-voltage circuit breakers protect circuits using less than 1000 V of electricity.

The interrupting-current rating (also known as short-circuit rating) of a fuse or circuit breaker is the maximum current it can safely interrupt. If a fault current exceeds a level beyond the interrupting capacity of the protective device, the device may actually rupture, causing additional damage.

The interrupting-current rating is many times greater than the continuous-current rating and should be far in excess of the maximum current the power source can deliver. Typical interrupt ratings are 10,000 A, 50,000 A, and 100,000 A.

The time-current characteristics or response time of a protection device refers to the length of time it takes for the device to operate under fault current or overload conditions.

Fast-acting-rated protection devices may respond to an overload in a fraction of a second, while standard types may take 1 to 30 seconds, depending on the amount of the overload current. Being very sensitive to increased current, fast-acting fuses are used to protect exceptionally delicate electronic circuits that have a steady flow of current through them.

Circuit overcurrent protection is a vital part of every electric circuit. Electric circuits can be damaged or even destroyed if their voltage and current levels exceed the safe levels they are designed for. In general, fuses and circuit breakers are designed to protect personnel, conductors, and equipment. Both operate on the same principle: to interrupt or open the circuit as quickly as possible before damage can occur.