High pressures are possible when an electrical fault occurs under oil. The pressure could burst the steel tank of a transformer. An explosion vent is a pipe, 4′′ in diameter or greater, that extends a few feet above the cover of a transformer and is curved toward the ground at the outlet end of the pipe. A diaphragm fitted at the curved end breaks at a relatively low pressure to release the forces from within the transformer. The diaphragm may be glass or thin phenolic sheeting (0.16′′).

The chemical and electrical phenomena associated with faults in oil-filled transformers generate gas. A volume of gas is frequently formed in the early stages of a fault. For this reason, a protective device is needed to draw attention to the fault in its early stage, allowing action to be taken to prevent damage.

The boiling point of transformer oil is typically in the range of 280°C to 400°C. At the upper end of the boiling point range, traces of decomposition begin to appear. As the temperature rises higher, breakdown continues. At arcing temperature, the oil is completely broken down into carbon and simple gases that are formed from the elements in the oil.

If a transformer is de-energized in a humid area, condensation may occur on the coils. A common failure in transformers is due to moisture in the insulation. To prevent this type of failure, hot air can be used to dry out the coils before energizing. Alternatively, heat can be applied during the downtime so that condensation never appears.

Electrical insulating oils decompose when subjected to an electric arc during silent discharge in regions of high electric stress or when overheating occurs from high resistance joints, connections, or splices. The products of the decomposition are carbon, water or steam, carbon dioxide, and a number of flammable gases such as carbon monoxide, hydrogen, methane, and acetylene. The composition of gases produced varies with the oil, fault, the power dissipated in the fault, and other factors.

Should such a fault develop, the transformer must be removed from service as quickly as possible to prevent damage. A thin diaphragm in the gas relay moves when acted upon by the pressure wave. A switch connected to this diaphragm energizes relays to switch the transformer OFF the load. However, gradual overheating of any part, such as a hot joint, while not causing a pressure wave, can ultimately result in the failure of the transformer. This local overheating decomposes or cracks the oil, forming gases that rise to the top of the tank. The gases accumulate in a dome-like section of the relay in which a float is riding on the oil. The gas displaces the oil, dropping the level of the oil. Because the float rides the surface of the oil, the float also drops. When the float drops, it operates a switch that engages an alarm circuit. Upon receiving an alarm, the condition may be investigated before extensive damage results.

Electrical power circuits must be insulated by bushings where they enter the transformer tank (see Figure 1). In addition, the bushings and entrance must be oil-tight and weatherproof. The bushing is normally composed of an outer porcelain body. At high voltages, additional insulation in the form of oil and molded paper is used within the porcelain. The four types of bushings used on transformers as main lead entrances include solid porcelain, cable or pothead terminators, oil-filled, and condenser bushings at the transition from underground to overhead service. A pothead is a transition device between underground cables and overhead lines. 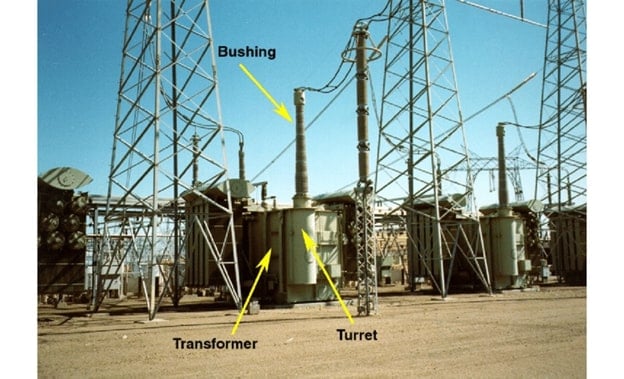 Low-voltage transformers with separate leads normally have solid porcelain bushings. These bushings consist of high-grade porcelain cylinders through which the connections pass. The outside surface may be plain or have a series of corrugations or skirts to increase the surface leakage path to the metal case. When the conductors are brought to the transformers in lead-covered cables, the leads often enter through cable terminators. These terminators are similar to ordinary potheads and are attached to the transformer with the bushings inside the case.

High-voltage bushings are either oil-filled or condenser bushings (see Figure 2). Oil-filled bushings have a central conducting rod or tube through which the conductor passes. Around this, a series of insulating barriers are held apart by spacers. The barriers and spacers are enclosed in a skirted porcelain shell that is filled with oil. Condenser bushings are similar except that the central rod is wound with alternating layers of insulation and foil. This results in a path from the conductor to the case consisting of a series of condensers. The layers are designed to provide an approximately equal voltage drop between each condenser. In some condenser bushings, the whole bushing is enclosed in a skirted porcelain shell. Other types have only the exposed part of the bushing enclosed in the porcelain shell. 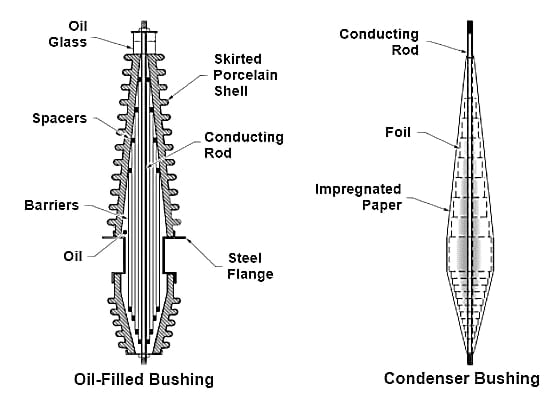 Figure 2. High-voltage bushings are designed to protect the transformer from the high voltage present in the surrounding wires.

A liquid-handling valve is fitted at the bottom of the transformer tank to add or remove liquid from the tank. The valve is normally connected to a sump to ensure that all liquid is removed. Adjacent to the liquid-handling valve is a 1⁄2′′ sampling valve, which also leads to the sump. The sampling valve is a needle valve used to draw a sample of liquid for test purposes. By taking liquid from the lowest point in the tank, any free water should appear in the sample and give a warning of contamination of the liquid.