The Idea Behind Three-level Topology 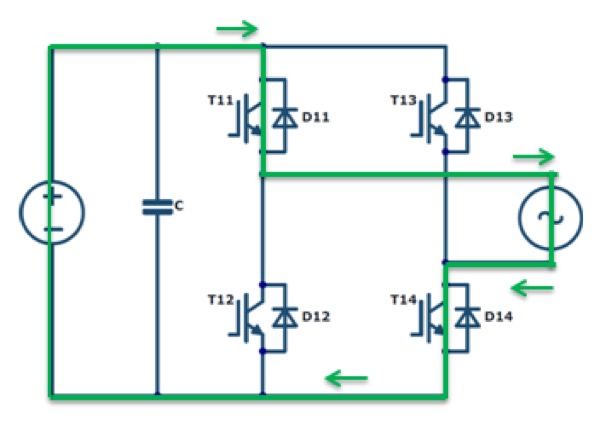 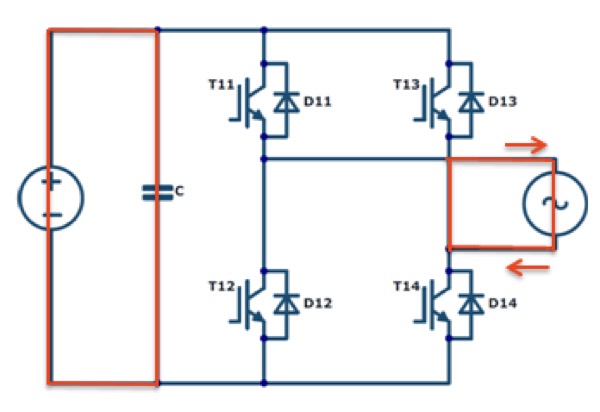 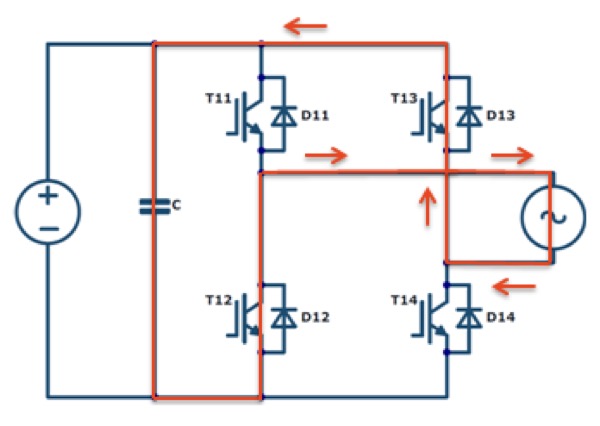 This regenerated energy flows to the inverter twice, which takes a toll on efficiency. Three-level topologies such as H6.5, in contrast, reduce filtering effort and switching losses. Fig.1 illustrates the idea behind this three-level operation. T11 and T14 switch on and energy flows to the output at active power. Energy then flows back to the DC capacitor through D13 and D12 during freewheeling, which compounds the losses within the system. Three-level topologies such as H6.5 and HERIC® uncouple the DC link capacitor from the AC output in the freewheeling phase to reduce overall losses. 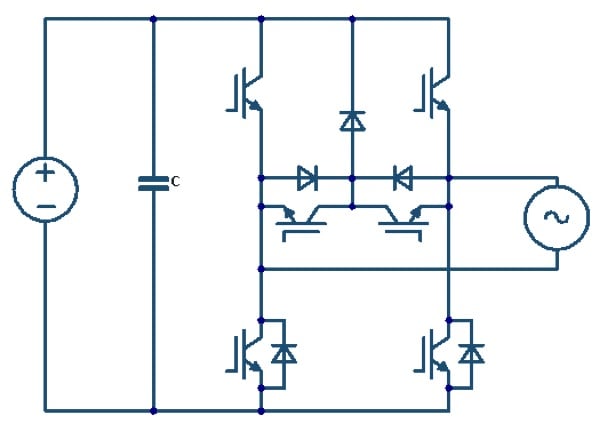 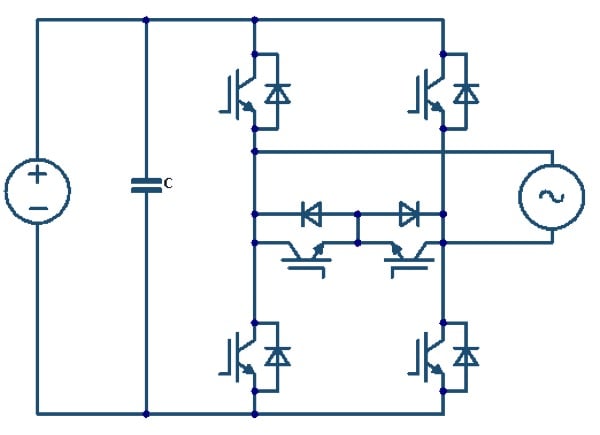 H6.5 The benefits, drawbacks and constrains of the two topologies at a glance: 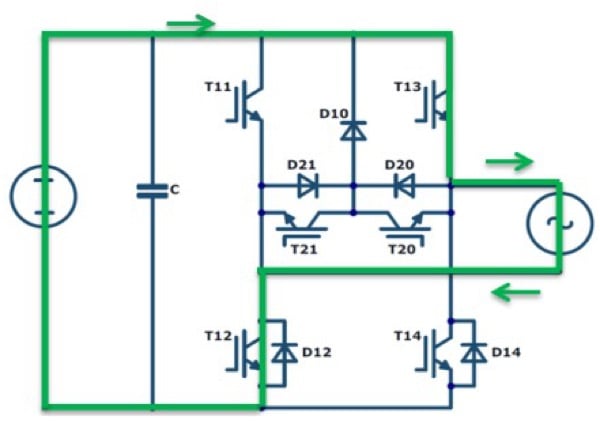 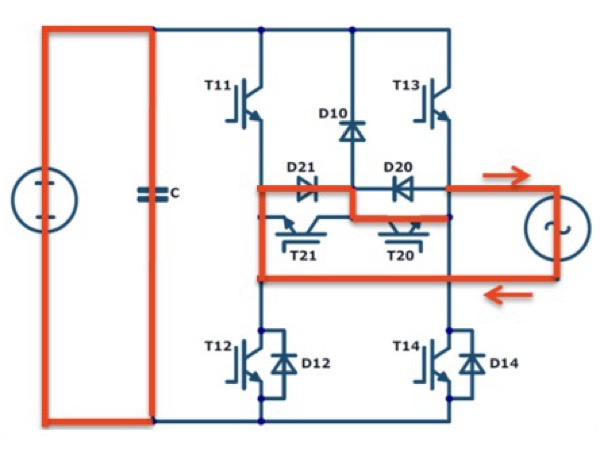 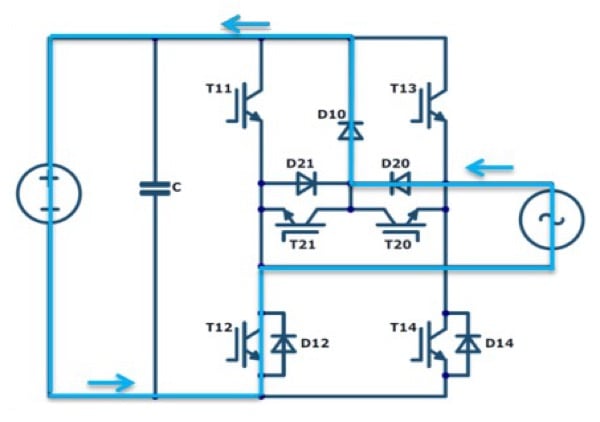 Figure 4: The operating principle of H6.5 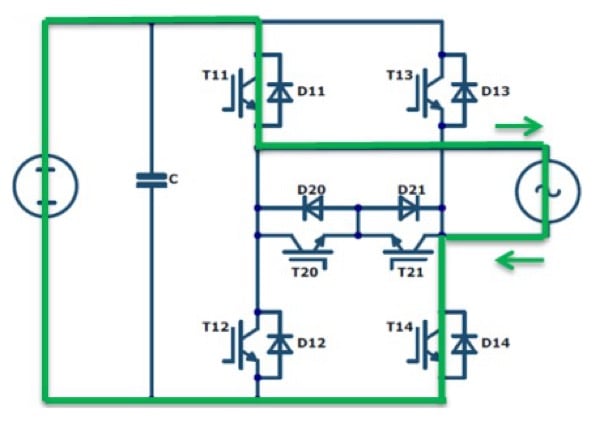 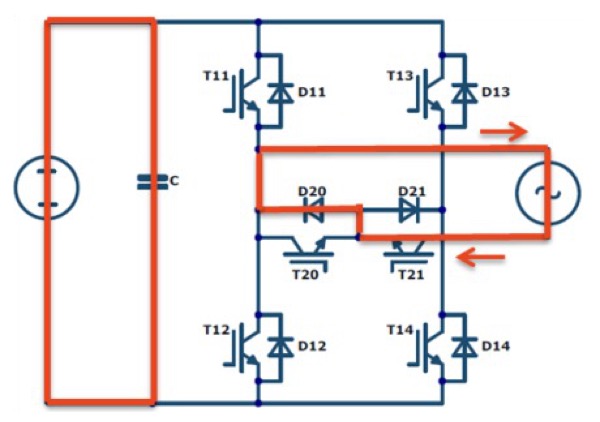 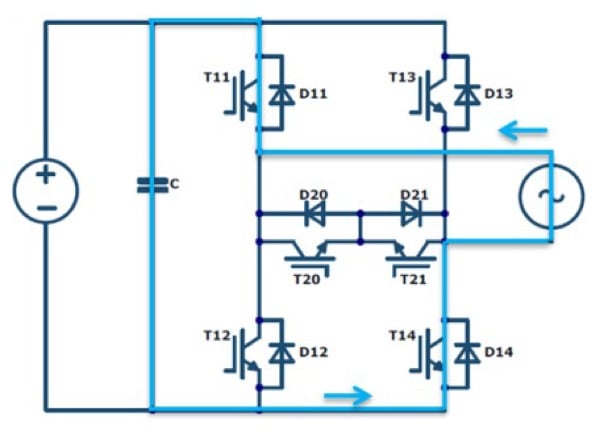 Figure 5: The operating principle of HERIC®

We benchmarked H6.5, HERIC® and H-bridge topologies’ cost and efficiency to allow for meaningful comparison and assessment, and included H-bridge topology to outline the differences between two-level and three-level topologies. Our efficiency calculation examined nominal and partial load scenarios at the power factors 1 and 0.8.

The charts in figures 6 and 7 compare the topologies’ efficiency under nominal operating conditions. H6.5 and HERIC® clearly exhibit the same performance at a power factor of 1. Efficiency diverges by no more than 0.02% at a power factor of 0.8, but the lower cost compensates for this gap because H6.5 requires one less diode than HERIC®. The minimum efficiency gap between H6.5 topology and the H-bridge is 0.14% at 4 kHz. The gap widens as the switching frequency increases.

The California Energy Commission’s weighted efficiency formula for a solar inverter is:

To compare topologies under partial load conditions, we ran simulations at 50% of nominal load, which has the biggest impact on the weighted efficiency calculation according to European standards. Figures 8 and 9 compare the topologies’ efficiency at 50% of nominal load. H6.5 and HERIC® clearly exhibit the same performance at a power factor of 1. Efficiency diverges by no more than 0.02% at a power factor of 0.8, but the lower cost compensates for this gap because H6.5 requires one less diode than HERIC®.

The solar market is price-driven. Even a small change in one component’s price can have a big impact on the downstream system’s cost. To get a better picture of these topologies’ economics, we also benchmarked their costs. Figure 10 compares their normalized costs. 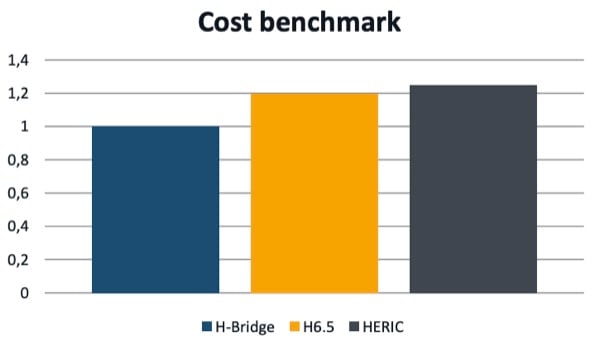 H-bridge topology requires just four IGBTs and four diodes, so it is, as expected, at the bottom of the price scale. HERIC® has one diode more for a total of twelve components and costs around 5% more than H6.5, which has eleven components. Fraunhofer-Gesellschaft holds the patent on HERIC®, so royalties also have to be taken into account. This cost benchmark is meaningful for frequencies up to 20 kHz. Particularly in the H-bridge’s case, it would take a bigger, costlier chipset to solve the problem of sharply increasing losses at higher frequencies.

The H6.5, a new three-level topology for single-phase solar inverters, is a viable alternative to solutions such as HERIC®. This new topology is suitable for real power and reactive power modes. The Vincotech flowPACK 1 H6.5 features this topology. It comes in 50 A, 75 A and 100 A versions with an IGBT S5 chipset in a flow1 housing.

Baran Özbakır works as the Product Marketing Manager at Vincotech, Munich Area, Germany. He is responsible for the market analysis and marketing strategies for power supply industry; development of price strategies; product life-cycle management and cost calculation analysis and handling of technical and business requests for quotation. He is skilled in the field of power electronics, MatLab and electrical engineering. He earned his Bachelor's Degree in Electrical and Electronics Engineering at Yeditepe University located in Istanbul, Turkey. He then earned his Master of Engineering in Power Engineering at the Technical University of Munich located in Germany.