Optimizing the Prototyping and Design of Custom Magnetics

Optimizing the Prototyping and Design of Custom Magnetics

“To meet application-specific feature specifications, many high-frequency magnetics designs must now be customized. What has proven successful for customization is where experienced engineering teams can supply both the software (magnetic design and FEA) and hardware (prototyping tools) portions of the design from one power electronics laboratory location. Being able to supply this combination of engineering talent provides time-to-market and configuration benefits, better supporting a customer’s initial converter prototype design.”

This article highlights the power advantages gained in using Finite Element Analysis to identify the optimum winding order before proceeding with physical prototypes. Furthermore, it determines how actual prototype measurements to simulations can vary. Therefore, having the ability to create prototypes in the same location as the simulation software is a critical requirement.

The first steps in creating a magnetic component involve a preliminary specification of the power supply itself, including additional information – such as the topology – as well the manufacturer and identifying the power management chip series. A basic electrical block diagram of the system will indicate the number of windings involved. 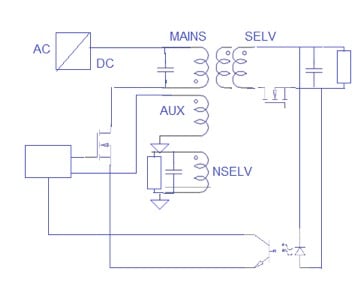 Figure 1 shows an isolated AC/DC 70W Flyback power supply with reinforced isolation. The control loop consists of secondary voltage feedback and primary current sensing. The coordination of the MOSFET and synchronous rectifier is done using the auxiliary (AUX) winding and the controller IC for measuring the demagnetization time. 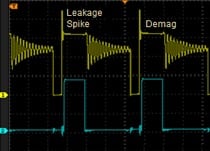 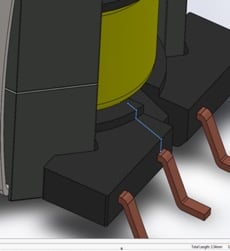 Ip = Peak Current in the Primary

Bourns in Europe uses Solid Works for mechanical design in which Figure 3 shows one example of a Solid Works transformer design. The blue line highlighted is measuring the shortest distance between a secondary SELV pin and winding. Solid Works supports its partners in helping meet safety standards such as IEC62368-1 Edition 2.0 2014-02.

If a customer requires engineering samples urgently, then having all materials in stock is a clear advantage to help avoid delays. Typically, Bourns stocks more than 179 different shapes and sizes of MnZn Ferrite cores for new designs.

These cores are “un-gapped”, although custom laboratory machines can produce a flat uniform gap in less than 30 minutes. In addition, a Form-labs 3D printer is typically able to create bobbins of various types of plastic within four hours.

The time-consuming trial and error in assembling and testing different variations can be simplified by first relying on tools and software, such as ANSYS, for identifying optimum structures. The Flyback transformer example in Figure 1 is designed for 12V /6A isolated output (SELV) with a non regulated, non-isolated 12V/0.18A output (NSELV). 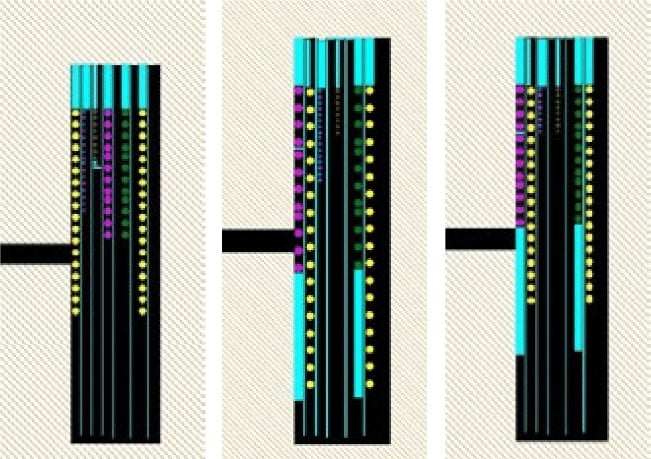 Figure 4 shows three different winding structures that have been analyzed by ANSYS with the leakage inductance shown plotted in Figure 5 and Figure 6. 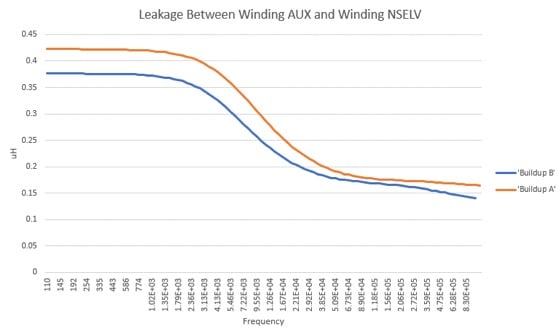 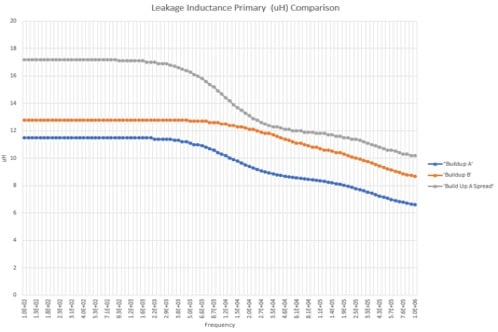 The software will optimize the layout of the windings, but also allows for manual placement of the windings. Likewise, it allows for insulators, such as tape and margin tape, that can have an effect on leakage inductance. The isolation requirement between two non-isolated windings (500 Vac) is not possible if the windings are placed side by side, which would be more efficient. They have to be separated by at least one layer of tape. The spacing between turns can also be adjusted.

Winding Order B provided the optimum balance between the Mains to SELV and AUX to NSELV leakage. Winding Order A has the lowest Leakage inductance Mains to SELV but had a higher AUX to NSELV leakage. Spreading out the windings actually increased the leakage inductance, despite the fact that the path length increases through this approach, hence lowering the field intensity (Ampere Turns Per Meter).

Increasing the distance between the turns allows uncoupled flux to pass into space between windings. However, there is a trade-off in the space between turns and the overall length of the winding.

Therefore, using margin tape to keep the turns close together was used successfully when making initial samples. The measured results confirmed that Winding Order B was the better option. These measurements demonstrated that spreading the winding across the bobbin had the opposite effect on the leakage inductance.

The differences in real and simulated measurements of leakage inductance can be partly due to the following factors:

B) Distribution of coil along the surface of the bobbin

It is important to note that while simulation helps to compare different scenarios and select the appropriate winding structure, it is imperative to build a sample and test it thoroughly in software.

Occasionally, customers might require support with testing transformers on application boards under certain conditions. For instance, Bourns has a license for Altium Designer for circuit and PCB design. The laboratory has a range of power sources and electronic loads together with a temperature chamber and infrared camera for testing boards. Bourns also assists customers with EMI board testing.

The most efficient power electronics laboratories are set up to support customers with design, simulation and engineering samples of high-frequency power magnetics. They also need expertise with advanced software design tools that will allow them to select the optimum magnetics design for the customer before making engineering samples.

Having mechanical and electrical engineering in the same location, as well as the available stock of ferrite cores and 3D printer allows for a quick, sometimes as fast as 24-hour, turn-around on engineering samples. While simulation tools save time by identifying the optimum design, there is still no substitute for testing actual samples and verifying results.

Cathal Sheehan is a Senior Technical Market Manager at Bourns, Inc. He studied Electrical and Electronics Engineering at University College Cork and pursued his MBA at The Open University. He has worked with various companies that related to electronics.