The electronic and wireless technology market is growing dramatically because of the success of the Internet of Things (IoT). Every day, more systems and electronic devices are now connected to either the Internet or to some kind of communication hub.

These devices are becoming smarter and are now capable of controlling other systems and loads. A smart thermostat can control the temperature in a building, a security system can unlock a door remotely, or a smart plug can turn on a lamp, a blind actuator, or an industrial tool. These are all examples of IoT with the capability to transduce a command to a load, or more simply said, to drive loads.

Often the load is controlled by a low-power, intelligent system relying on a processor or microcontroller, and often some sort of communication network, either wired, like power line communications, or wireless like WiFi, Z-wave or LoRa®.

These processing and communication systems are designed to be very low energy and need to be protected and electrically isolated from the high-power, high-voltage side of the system with various voltage levels of isolation rating. This is called galvanic isolation, meaning there is no direct electrical connection between the low power control side and the high power side of the system. The isolation is needed for several reasons, but the main idea is to protect the low power side from being damaged by transient voltage from the high power side. Other applications for galvanic isolation are used to protect humans from electric shocks that can result from a component failure. In this case the isolation needs to be rated by IEC standards to several kilo-Volts of isolation.

Emerging IoT applications are driving demand for a new way to protect these devices that is faster, quieter, smaller, more energy-efficient, and more reliable than today’s mechanical relays and optocouplers. One new innovation that has been developed for these applications is called Neo-Iso™ (TS13101), and it is expected to have a significant impact on IoT and industrial markets. 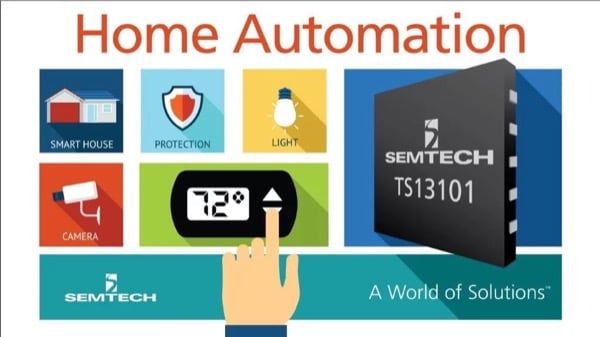 The challenge with IoT applications that use high power drive systems is that a galvanic isolation is required between the high power side and the low power side. Before Neo-Iso, systems mainly used legacy technologies like mechanical relays or optocouplers. They are widely used today to implement isolated power switches of all types, and can range in cost from 20 cents each to a much higher depending on the load.

A relay or electromechanical relay makes use of a coil to close or open a switch. The mechanical movement is a source of wear and tear. Additionally, the physical movement of the contact piece creates sparks and carbon deposits leading to a relatively short lifetime for relays. This electromechanical technology is not a fit for today’s high-integration and high-reliability needs. Compared to a semiconductor integrated circuit (IC), the size of relays is significantly bigger in all three dimensions, especially in Z-height, preventing integration in low profile products.

The relay’s power consumption is also too high to meet today’s energy efficiency standards and can often drain a system’s battery in a short amount of time. Some relays are non-latching and have to continuously be energized with a significant amount of current in order to counteract the spring and maintain the switch in closed position. Some relays address this issue by implementing a bi-stable mechanical system, but it requires the addition of a reset circuitry that increases the cost of the system.

Another issue with using relays is that the slow switching speed of a relay could result in damage to the system before the relay can react to a fault. Also, switching noise generated by relays is rarely desirable in today’s modern systems.

While relays have been in use for a long time, they are not so easy to source, especially lately. The scarcity of rare earth materials used in relay construction has created many delivery issues, and significantly increased the lead-time for sourcing relays. In fact, some relays have reached up to one year of lead-time due to the issues sourcing the rare earth material.

Solid-state relays (SSRs) were developed to address the drawbacks of mechanical relays. Because the communication in an SSR is realized by light – through the communication between an LED and a phototransistor – these devices are also called photocouplers. The biggest improvement over a mechanical relay is device size. SSRs can fit in a typical semiconductor package and reduce the Z profile of the end product significantly. SSRs also address the noise issue heard from the mechanical counterpart, and they require relatively short lead-time as they do not rely on scarce materials.

But that is about the extent of SSRs advantages over mechanical relays. While failure rate over time (FIT) is slightly improved compared to a mechanical system, the optocoupler reliability is still far from acceptable and remains the number one cause of isolated power supply failures today. The isolation rating of an optocoupler is only slightly better to that of a relay, around 4kV. The advantages in terms of performance, power consumption, switching speed, external bill of material (BOM) costs, and active protection capability are non-existent.

Neo-Iso as a New Paradigm

Semtech introduced the Neo-Iso switch to address the drawbacks of both mechanical relays and SSRs. Neo-Iso switches are available in a very small IC package and offer much higher performance than SSRs and relays. Neo-Iso technology provides silent operation. On-state drive currents are as low as 5µA and allow powering the device from a battery or can operate in power harvesting mode using only a fraction of the power from the load.

Neo-Iso solutions are silicon integrated circuits, and the silicon process that is used is not limited by any material sourcing and lead times are usually a few weeks.

The switching speed is three orders of magnitude faster than both relays and SSRs in the range of a few microseconds, delivering a much better ability to switch off a load after fault detection, which greatly improves safety. System reliability is high, as Neo-Iso has been proven on the bench to handle more than 10 million switching cycles. 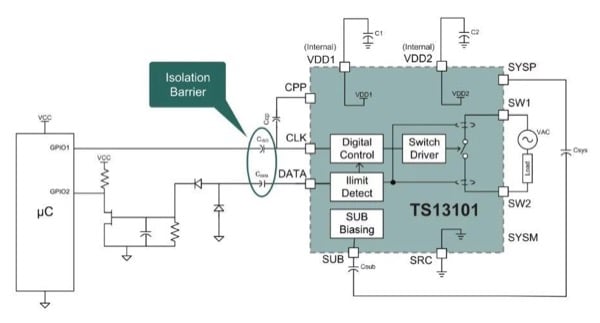 Overall system reliability is even further improved with the option to switch on or off at zero cross, saving the system from harsh transients. Neo-Iso also features a patent-pending bi-directional isolated communication path that provides the control system with switch status, metering, and diagnostic information. There is a multitude of targeted applications, but the Neo-Iso is expected to have a significant impact on the world of IoT because of its small size and low power consumption.

Another unique feature of Neo-Iso is the capability to harvest power from the load. When a switch is open, the voltage and energy across the switch is used to power the system. In the case when all the switches in the system are closed, the Neo-Iso implements a control system called dithering during which the switch is forcefully open for a very short amount of time (25us), enough to recover energy, but not long enough to disturb the load. Some versions of the Neo-Iso family can control the dithering automatically while the system microcontroller stays asleep.

Neo-Iso integrates all the rectification and transient voltage suppression capabilities, which are designed to ultimately reduce the board component count.

The new era of wireless communications and the impact of electronic systems is now being ushered in thanks to IoT systems. This is driving a fresh look at the technology used for galvanic isolation. With Neo-Iso technology, Semtech is bringing the best of semiconductor technology to what was an electromechanical device, and the features and benefits are ideally suited for this new generation of technology.

The Neo-Iso TS13101 datasheet is available online. Samples and evaluation boards are available on request.

Francois Ricodeau works as the Senior Product Line Manager for Power Products at Semtech since December 2015. He is responsible for the conversion of a newly acquired startup (Triune) to a growth trajectory with the implementation of a marketing discipline and methodology inherited from experience with large semiconductor companies, development of the market of new innovative product lines: Wireless-Power and Neo-Iso™ solid-state relays with applications to Internet of Things (IoT), connected devices, industrial, automotive LED backlighting, and power conversion. He is also a licensed private pilot and licensed in instrument rating from the Federal Aviation Administration. He earned his Engineering Degree in Electrical Engineering at CPE Lyon. He also holds a Master's Degree in Electrical Engineering from Purdue University and an MBA in Corporate Finance from the University of Dallas.