The LT3080, introduced in 2007, represented a new linear regulator architecture featuring a current source as a reference and a voltage follower for the output amplifier. This new architecture has a number of advantages, including easy regulator paralleling for increased output current and operation down to zero output voltage. Since the output amplifier always operates at unity gain without a resistor-setting divider, bandwidth and absolute regulation are constant across the output voltage range. Transient response is independent of output voltage and regulation can be specified in millivolts rather than as a percent of output.

Table 1: Some of Linear’s regulators featuring the current reference architecture.

The LT3091 is useful in high current, negative voltage applications requiring low noise or precision output. It features fast transient response, high PSRR and low output noise. Low dropout helps keep it from overheating when supporting loads up to 1.5A. Built-in protection includes reverse output protection, internal current limit with foldback and thermal shutdown with hysteresis. This versatile negative regulator architecture can operate down to zero volts out and as a negative floating regulator.

The current limit can be reduced below 1.5A by connecting an external resistor RLIM between ILIM and IN pins, as shown in Figure 1. This function can effectively protect the load and limit the temperature of the IC. 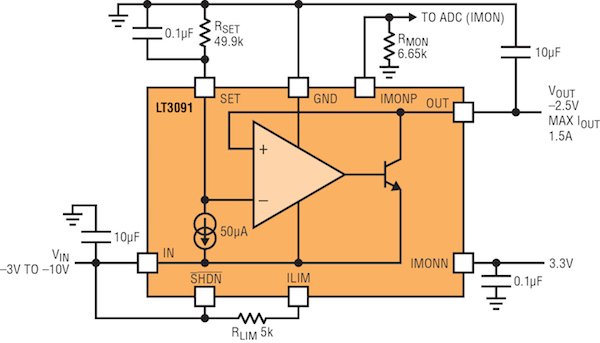 Figure 1: 1.5A, negative linear regulator with current limitation and monitor

With 3.3V feeding the IMONN pin, the IMONP pin sources current equal to 1/4000 of the output current. This current source is measured by tying a resistor, RMON, to ground in series with the current source and reading the voltage across the resistor. With the IMONP pin tied to VIN, the IMONN pin sinks current equal to 1/2000 of the output current. In this way, the positive or negative output current can be monitored with minimal components, no additional sense resistors or amplifiers required.

Paralleling LT3091s is easy with this new current source reference regulator. Paralleling is useful for increasing output current or spread-ing heat. Since the LT3091 is set up as a voltage follower, tying all the SET pins together makes the outputs the same voltage. If the outputs are at the same voltage, only a few milliohms of ballast, ROUT1,2, are required to allow them to share current.

Figure 2 shows a schematic of two LT3091s paralleled to obtain 3A output. The set resistor, RSET, now has twice the set current flowing through it, so the output is −100μA times RSET. The 10mΩ output resistors, ROUT1,2 ensure ballasting at full current. 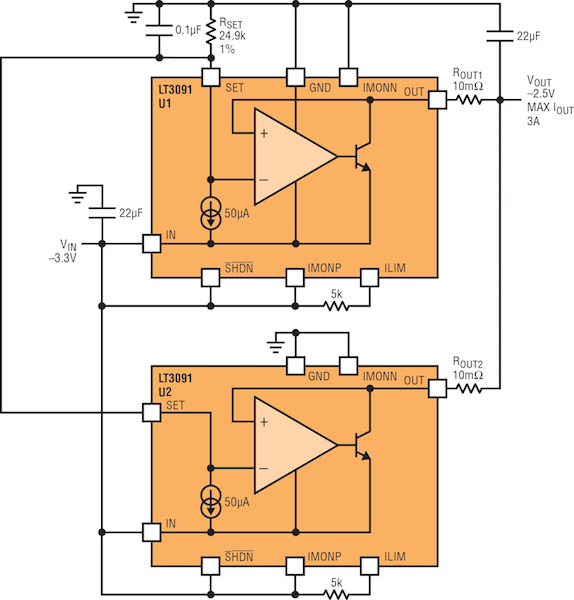 There is no limit to the number of devices that can be paralleled for higher current.

Figure 3 shows the thermal distribution of the design of Figure 2—U1 and U2 reach similar temperatures, indicating equally shared current. 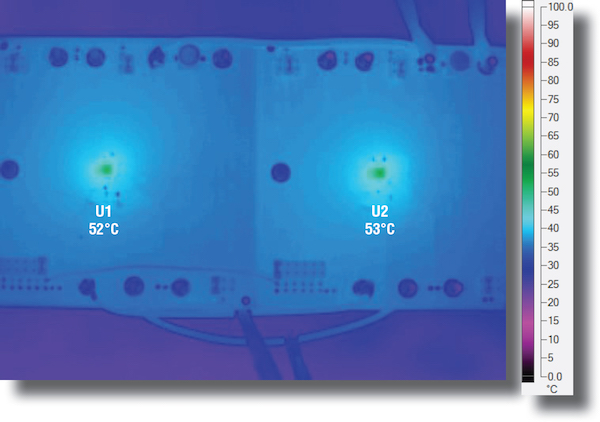 Inverting converters generate a negative voltage from a positive input and feature low output ripple. If combined with a high bandwidth LDO such as the LT3091, the overall converter can have a very high transient response with even lower noise.

Figure 4 shows a low noise coupled-inductor positive-to-negative converter. The inverting converter is based on LT3581, a PWM DC/DC converter with a built-in power switch. Its 4mm × 3mm DFN package and tiny externals can be combined with the LT3091 in a compact and quiet solution. Figure 5 shows the transient response of the two output voltages. Figure 6 shows the thermal performance of the entire system. 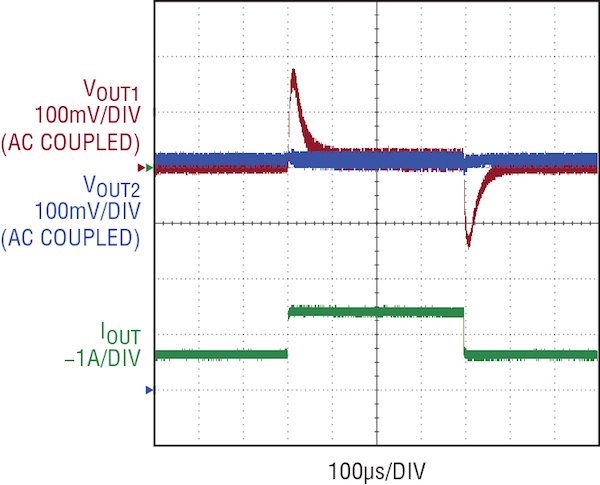 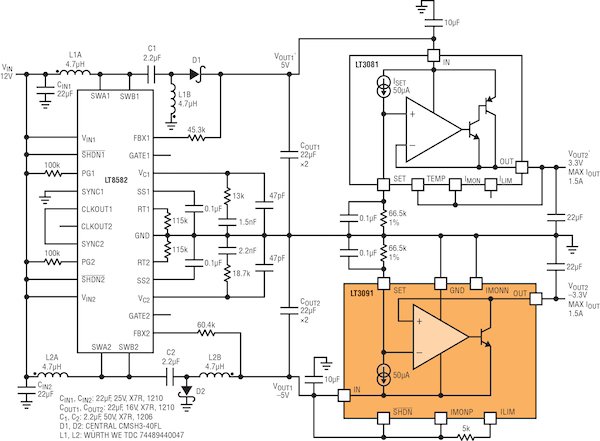 A high current positive-to-positive-and-negative converter can be built with a positive 1.5A LT3081 linear regulator and its negative 1.5A linear counterpart, the LT3091. The LT8582 is a dual-channel PWM DC/DC converter with internal switches in an available 7mm × 4mm DFN package. It can generate both a positive and negative output from a single input.

Dawson Huang joined Linear Technology Corporation in 2014 as an applications engineer. His work includes development, evaluation and characterization of new power management ICs. He is also in charge of circuit design and customer support of products related to LED drivers, buck-boost voltage regulators and isolated dc/dc converters. Dawson received his B.S. and M.S. degrees in electrical engineering from Huazhong University of Science and Technology, Wuhan, China, and a Ph.D from Virginia Tech.