This article features ROHM's new 1700V SiC MOSFETs for Switch-mode Power Supplies and its benefits in terms of power density and efficiency.

Basically, SiC diodes and MOSFETs can be used for all kinds of standard packages (discrete devices and modules). Discrete devices can be grouped into two categories: THT devices (through hole technology) and SMDs (surface-mounted devices). For package design, it is necessary to understand and consider the physical properties of SiC. For instance, parasitic inductances within the package are more significant in SiC semiconductors than in Si IGBTs because of the faster switching times of SiC devices. Therefore, Rohm makes intensive efforts to reduce the parasitic inductances within the discrete devices and modules.

Rohm began mass-producing of initial commercial SiC products in 2010. Since then, the company expanded its product lines across different power categories in order to meet the requirements of industrial and automotive applications. ROHM’s product offering includes discrete devices (THT and SMD) as well as modules. As a semiconductor manufacturer, ROHM also provides its products as SiC wafers (bare die) and co-operates with major module manufacturers to expand the worldwide SiC market.

In the SiC MOSFET segment, ROHM’s product portfolio is even larger featuring two different technologies (planar and double trench). Planar technology is already available in discrete devices and modules for 650V, 1200V and 1700V and current levels up to 600A.

Rohm starts its volume production of third-generation SiC MOS products with discrete devices and full-SiC modules based on its proprietary double trench technology, which will expand the existing MOSFET product family and contribute to the evolution of highly efficient, highly reliable power electronics.

Switch-mode power supplies (SMPS) are among the most important elements of all power electronic systems. After all, it is impossible to implement the functionality of the main system without a suitable power supply. Basically, the SMPS subsystem acts as the internal power supply for all electronic subassemblies of a power electronic system, providing the necessary supply voltages for the microcontroller, the sensors and the drivers of the main power semiconductors. As the industry’s most popular SMPS topology, fly back converters of up to several hundred Watts transfer electrical energy between a DC input and a galvanically isolated DC output. In practical applications, a Si MOSFET is used as the main switch with switching frequencies typically ranging between 16kHz and 500kHz. Higher switching frequencies enable the use of smaller inductors, although high losses in the Si MOSFET and the diode are a limiting factor. Rohm’s new 1700V SiC MOSFET is excellently suited for these applications because of its efficient switching behavior and low Rdson. ROHM provides the 1700V SiC MOSFET in the TO-3PFM and the TO268-2L package (see Figure 1). 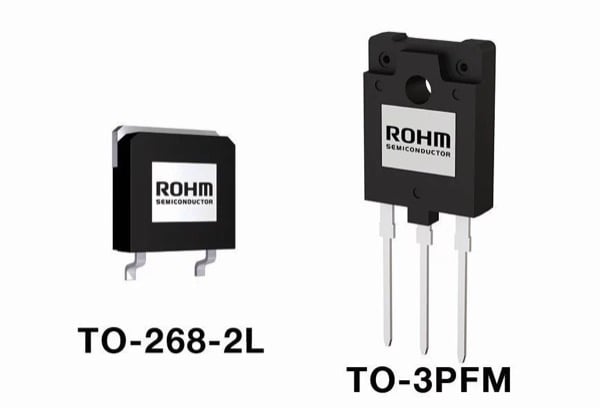 Thanks to its high electrical field strength, the SiC MOSFET maintains its low on resistance per chip area even at high breakdown voltages. Figure 2 shows a comparison between ROHM’s newly developed 1700 SiC MOSFET and the best in class Si MOSFET available in the market, which is typically, used in fly back applications. The 1700V SiC MOSFET features a much lower on-state resistance (Rdson) than the 1500V Si MOSFET. Values of 0.75Ω/1.15Ω have been achieved with the SiC MOSFET, while the Si MOSFET features 9Ω, although the SiC MOSFET’s die size is 17-times smaller than the die size of the Si MOSFET.

Using the 1700V SiC MOSFET (SCT2H12NY) in a TO268-2L package greatly improves the on-state resistance and the current capability compared to the Si MOSFET with the same package. Thanks to the SiC MOSFET’s very low capacitance values (Ciss and Coss), switching frequencies beyond 100kHz can be used without any thermal problems, enabling a miniaturization of the inductive components and the space of printed circuit board. Furthermore, automated board assembly using a SMD line is enabled by the use of the TO268-2L SMD package, resulting in a significant reduction of production costs and finally total costs. In order to achieve optimum switching behavior of the SiC MOSFET in a flyback topology, Rohm designed a special driver (BD768xFJ-LB) with a dedicated controller in a SOP-J8S package.

In a three-phase 400VAC industrial application, two series-connected Si MOSFETs are typically used for flay back converter as the main switch to provide sufficient voltage headroom for the main switch in the off state. Thanks to the availability of Rohm’s new 1700V SiC MOSFET, the two Si MOSFETs can be replaced by a single SiC MOSFET. 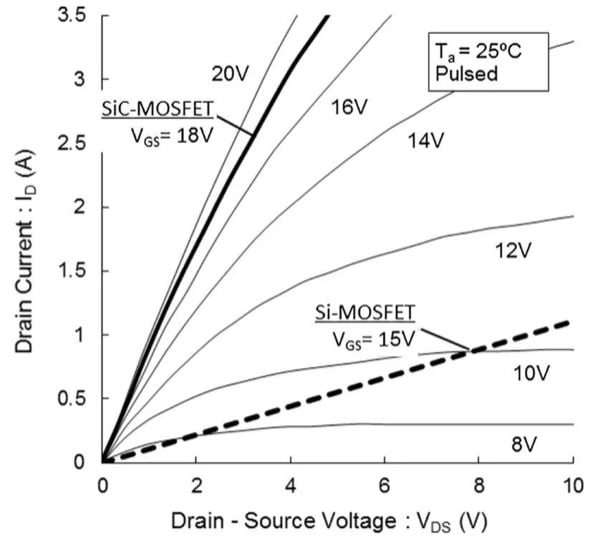 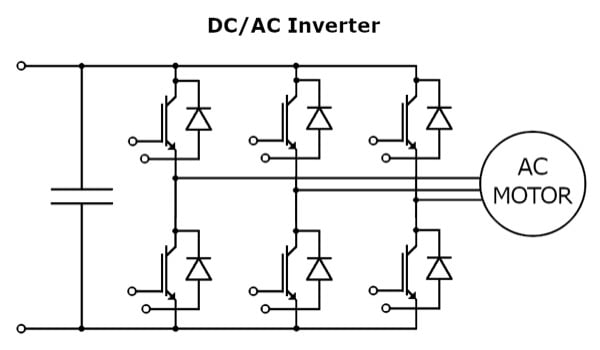 Output filters of this kind enable the use of unshielded cables, which reduces total equipment costs dramatically. As an additional advantage, these filters lead to much lower high-frequency currents in the motor windings, which in turn results in reduced power losses in the motor. This, in consequence, will improve the motor’s thermal behavior and reduce its noise level significantly. All in all, a sine filter will have a positive impact on the lifetime and reliability of the entire system. However, in high-power equipment the sine filter will account for most of the application’s volume. It would therefore be an interesting proposition to reduce the filter’s size and cost, which can be basically done by increasing the switching frequency of the semiconductors in the inverter.

With its excellent physical properties, SiC opens new doors to this kind of sophisticated applications. In particular, SiC enables the use of high switching frequencies without causing excessive thermal stress in the inverter.

Two benefits result from using high switching frequencies: The output filter can be smaller and the resonance behavior of the entire system will improve accordingly.

Figure 4 compares the switching losses of a Si IGBT technology and ROHM’s SiC technology in a standard inverter topology (see Fig. 3). The comparison is based on a DC link voltage (Vdc) of 600V, a motor phase current (Imotor) of 200A and a switching frequency (Fsw) of 10kHz.

For the data in Figure 4, the loss was normalized to the combination of Si IGBT and Si FRD (black bar). In a hybrid configuration consisting of a Si IGBT and a SiC SBD as an antiparallel freewheeling diode, switching losses will be 30% lower (blue bar). If a full-SiC module from ROHM (SiC MOSFET and SiC SBD) is used in this topology, switching losses will be reduced significantly (red bar). 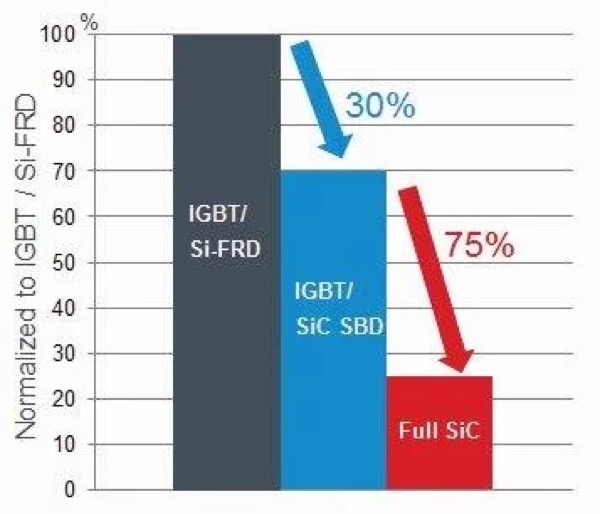 Figure 4: Comparison between an Si IGBT, a hybrid configuration and a ROHM full-SiC module 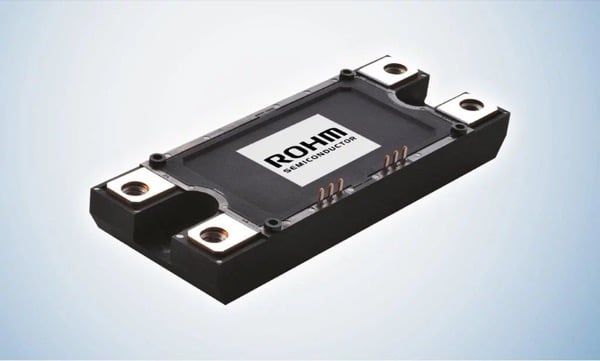 The world’s first full SiC module based on ROHM’s newly developed trench technology is shown in Figure 5. Featuring a breakdown voltage of 1200V, the module supports a drain current of 180A. ROHM is increasing its line up from Modules continuously and offers now modules up to 600A.

As described in part 2 of this article series, a parasitic inverse PN diode (body diode) is present in every SiC MOSFET. In commutation loops of power electronic systems with series inductors, some current flows in this body diode when the SiC MOSFET is in the off state. Like all PN diodes, a forward voltage occurs at the diode when a current is flowing through it. Physical properties of SiC MOSFETs include a wide band gap, which results in a high voltage drop at the body diode. During the design phase of a system, power electronic designers should explore how often the body diode will be used during switching transitions. The high voltage drop results in high thermal losses if a large share of the current flows through the body diode. In addition, switching time plays an important role in thermal design.

As one of the options available to eliminate this high voltage drop, it is possible to benefit from a specific physical property of SiC MOSFETs called reverse conduction (see Figure 6). The mechanism behind reverse conduction is based on the fact that the channel of a SiC MOSFET can be turned on again even if the MOSFET is reverse biased. The reverse current will then flow through the SiC MOSFET channel instead of the body diode. As depicted in Figure 7, the voltage drop between drain and source will decrease if the gate voltage increases. A gate voltage of Vgs = 18V will yield optimum results. 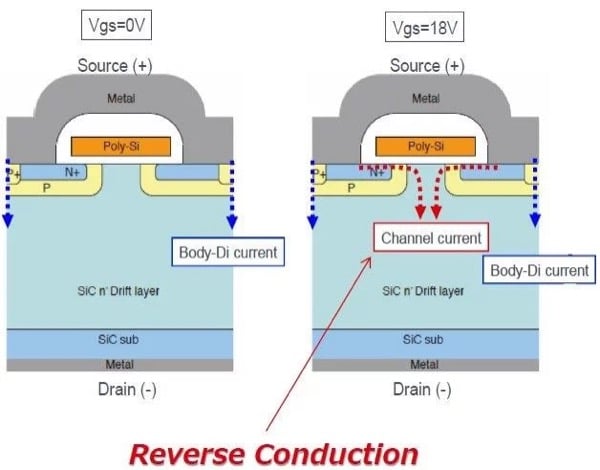 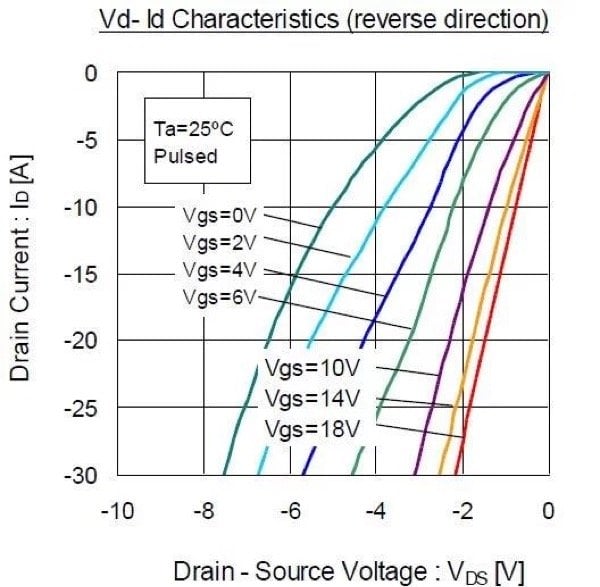 Figure 7: The voltage drop will decrease when the MOSFET channel is turned on again

How can this reverse conduction effect be used and adjusted in applications based on half-bridge configurations?

The half-bridge configuration is a very popular topology in power systems including inverters and DC/DC converters. It consists of two switches or SiC MOSFETs (high-side switch and low-side switch). In the half-bridge topology, the complementary driver signals generated by the microcontrollers are adapted to the MOSFETs by gate drivers to ensure the functionality of the system. A dead time must be inserted between the transitions of both switches to prevent a short circuit in the DC link. The current will flow through the body diode during the dead time. After the dead time, the MOSFET, which previously was in the off state, can be turned on again although it is reverse-biased. As shown in Figure 8, the current will flow through the body diode only during the dead time (blue arrow) before the MOSFET channel is turned on again to let the current flow through the MOSFET channel (red arrow). This reverse conduction can be implemented via the software running on the microcontroller.

Furthermore, Rohm provides leading technologies for the new generation of power products, resulting in breakthrough performance with respect to efficiency, heat generation and compactness. New products and materials like SiC MOSFETs and full-SiC modules were developed for this purpose.

Rohm makes unmatched contributions with its energy-efficient, future-oriented solutions especially tailored to meet the requirements of the automotive market.

Aly Mashaly works as a Senior Manager Power Systems at ROHM Semiconductor Europe located in Willich, Germany. He is particularly skilled in the field of electrical engineering, semiconductors, as well as in power management. He earned his Bachelor's Degree in Electrical Engineering - Energy Technology at the University of Ain Shams located in Cairo, Egypt. He then acquired his Master's Degree in Electrical Engineering at Leibniz University in Hannover, Germany.