This article offers a method of How to use a low-cost microcontroller as a driver for a single-winding, single-phase brushless DC motor.

In a low-power motor application, where cost is more important than complexity and torque requirements are reduced, a single-phase brushless DC (BLDC) motor is a good alternative to a three-phase motor.

The Benefits of Single-Phase BLDC Motors

This type of motor is low cost because of its simple construction, which is easier to fabricate. Also, it only requires a single-position sensor and a few driver switches to control and energize the motor winding. Therefore, the trade-off between motor and control electronics can work out favorably.

To maintain the cost-effectiveness, a low-cost motor driver is needed. The driver circuit described here can exploit two feedback loops: the first is the inner loop, responsible for commutation control, and the second is the outer loop, which handles speed control. The speed of the motor is referenced to an external analog voltage and fault detection can be sensed during over-current and over-temperature conditions. 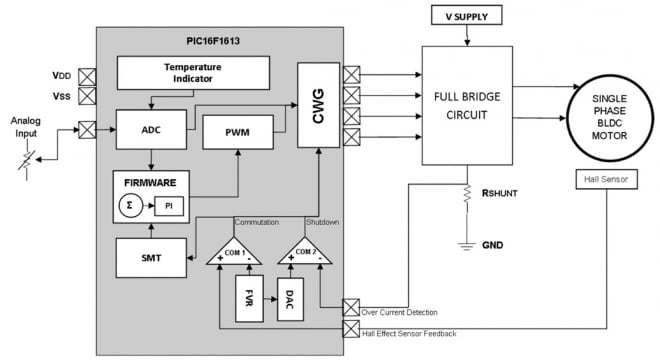 The full-bridge circuit, which energizes the motor winding, is controlled by the CWG output. A Hall sensor is used to determine the rotor position. Current that passes through the motor winding is translated into a voltage through the sense resistor Rshunt for over-current protection. The speed can be referenced in an external analog input. Figure 2 shows the control diagram of the motor driver; for this application, the rated motor voltage is 5V and rated speed 2400r/min. The motor driver supply voltage is 9V. The speed reference can be any analog input. The microcontroller’s ADC module has 10-bit resolution and up to eight channels, making it suitable for different kinds of analog input. This is being used to derive the speed reference and the initial PWM duty cycle, used to initialize the speed of the motor based on the source of the speed reference.

The initial duty cycle can be increased or reduced by the result of the proportional-integral (PI) controller and the new duty cycle value loaded in the CCP, the PWM output of which is used as the initial source of the CWG to control the modulation of the lower side switches of the full-bridge driver and, hence, the speed of the motor.

The inner feedback loop is responsible for commutation control. The CWG output, which controls the excitation of the stator winding, depends on the state of the Hall sensor output, which is compared with an FVR by the comparator. The comparator hysteresis is enabled to disregard the noise in the sensor output.

The output of the comparator toggles between forward and reverse full bridge mode to produce clockwise or anti-clockwise rotation. The CWG output is fed to the switches’ input of the full-bridge circuit.

The full-bridge circuit in Figure 3 is primarily composed of two p-channel MOSFETs as high-side switches and two n-channel MOSFETs as low-side switches. The main advantage of the p-channel transistor is the simplicity of the gate-driving technique in the high-side switch position, thus reducing the cost of the high-side gate-driving circuit. Even though the high- and low-side switches can be switched on at the same time – cross conduction – this kind of switching should be avoided otherwise it will create a current shoot-through that might damage the driver’s components. To avoid this, a dead-band delay can be implemented using the CWG’s counter registers. This provides non-overlapping output signals that stop the high- and low-side conducting at the same time. Ideally, the n- and p-channel MOSFETs should have the same on-resistance (RD-Son) and total gate charge QG to obtain the optimal switching performance. Therefore, while it would be good to choose a complementary pair of MOSFETs to match these parameters, in reality, this is impossible due to their different construction; the chip size of the p-channel device must be two to three times that of the n-channel to match the RDSon performance. But the larger the chip size, the larger the effect of QG. Thus, when selecting the MOSFET, it is important to decide whether RDSon or QG will have the biggest impact on switching performance and choose accordingly. 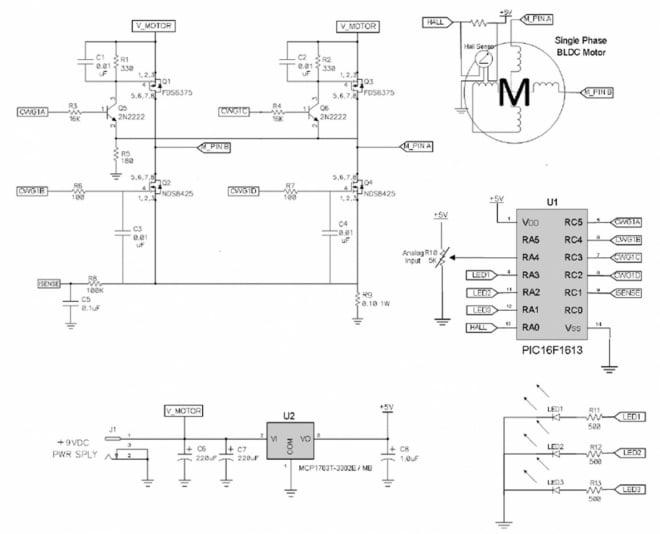 Fault Detection for Overcurrent and Stalling

Exceeding the motor’s maximum allowable torque loading can cause the motor to stall and the winding to take the full current. Thus, to protect the motor, fault detection for overcurrent and stalling must be implemented. To implement over-current detection, Rshunt is added to the drive circuitry, which gives a voltage corresponding to the current flowing in the motor winding. The voltage drop across the resistor varies linearly with respect to the motor current. This voltage is fed to the inverting input of the comparator and compared with a reference voltage based on the product of Rshunt resistance and the maximum allowable stall current of the motor. The reference voltage can be provided by the FVR and can be narrowed down further by the DAC. This allows a very small reference voltage to be used, which lets the resistance be kept low thus reducing power dissipation from Rshunt. If the Rshunt voltage exceeds the reference, the comparator output triggers the auto-shutdown feature of the CWG, the output of which will remain inactive as long as the fault exists.

The outer loop shown in Fig. 2 controls the motor’s speed under varying conditions such as changes in load demand, disturbances, and temperature drift. The speed is measured by the SMT, which is a 24bit counter-timer with clock and gating logic that can be configured for measuring various digital signal parameters such as pulse width, frequency, duty cycle and the time difference between edges on two input signals. Measuring the motor’s output frequency can be done through the SMT’s period and duty cycle acquisition mode. In this mode, either the duty cycle or period of the SMT signal can be acquired relative to the SMT clock. The SMT counts the number of SMT clocks present in a single period of motor rotation and stores the result in the captured period register. Using this register allows the actual frequency of the motor to be obtained. When the speed reference is compared with the actual speed, it will yield a positive or negative error depending on whether the actual speed is higher or lower than the set reference. This error is fed to the PI controller, which is a firmware algorithm that calculates a value that compensates for the variation in speed. This compensating value will add to or subtract from the initial PWM duty cycle to produce a new value.

The Benefit of Efficient Microcontrollers in Motor Control Applications

In cost-sensitive motor control applications, an efficient and flexible microcontroller can have a significant impact. Device efficiency can be measured against the level of integrated peripherals to optimize the control task along with the number of pins and memory and the size of the package. Additionally, ease of use and time to market are important especially if variants of the design are required.

This article has shown how a low-cost microcontroller can meet these requirements and let the driver set the desired speed reference, predict the rotor position, implement a control algorithm, measure the actual speed of the motor and impose fault detection.

Mike Gomez works as an Application Engineer at Microchip Technology since September 2013 where he is responsible for making application notes for 8-bit PIC microcontrollers, design of applications for PIC microcontrollers focusing on Motor Control Application and general peripherals. He earned his Bachelor's Degree in Electronics and Communication Engineering at the Polytechnic University of the Philippines. He also holds a Master's Degree in Electronics and Communication at De La Salle University.