This article investigates the performance and cost of different boost topologies for 1500V multi-string solar inverters.

Designers are seeking for a higher level of integration, which means the mounting of the boost inductors on the printed circuit board (PCB). Besides this fact, also efficiency and cost are important aspects to be considered. 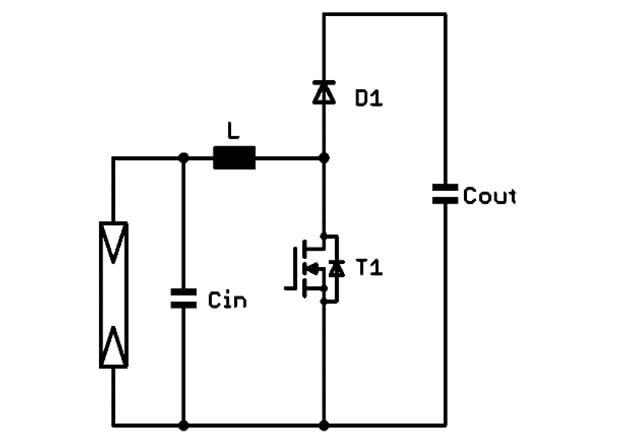 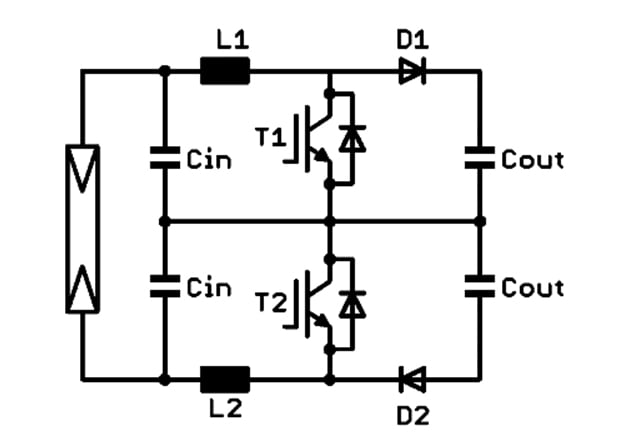 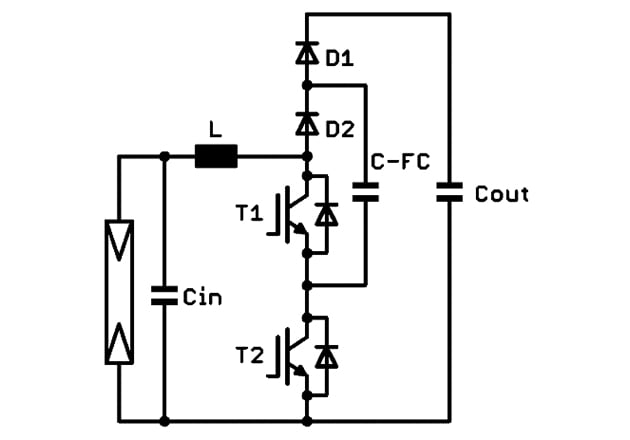 The three-level topologies comprise an additional third voltage level. This third voltage level reduces the voltage across the boost inductor, boost switch and diode to half the value required for two-level topologies. Less voltage across the boost inductor has the advantage that the required inductance for a given ripple current is only half of the required inductance at two-level. In consequence, the overall inductor volume, weight, and cost is reduced. This benefit is not considered in the following power module cost benchmark and should, therefore, be kept in mind. In the symmetric boost topology, the third voltage level is created by splitting the boost circuit into a positive and negative part. Input and output capacitors are split as well and connected to the neutral point, which provides the additional third voltage level. The pulse-width modulation (PWM) pattern needs to be corrected in order to ensure symmetry of the neutral point. The flying-capacitor boost topology creates the third voltage level – as the name indicates – by a floating or flying-capacitor (C-FC). The flying-capacitor shall be charged to half of the output voltage. It is noticeable that only one boost inductor is required.

In this case study, the cost and performance is compared for a 21 kW boost leg of a 1500 V multi-string solar inverter. Following topologies and chipsets are benchmarked:

From the efficiency benchmark in Figure 4, it can be seen that the full SiC two-level boost stage has the lowest efficiency (red dotted line) and the highest price (Figure 5). The hybrid chipset would even have lower efficiency in this frequency range and therefore is not taken into account. 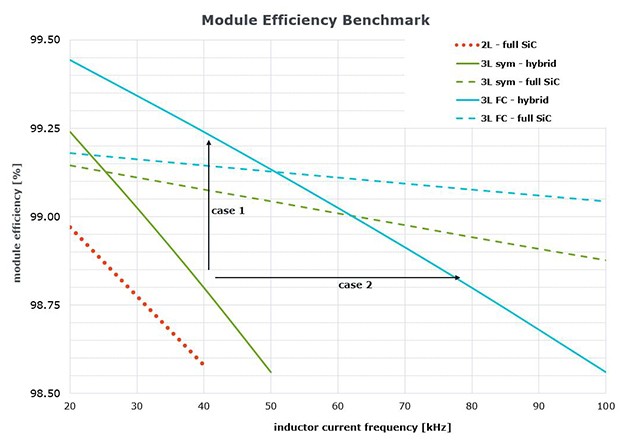 The flying-capacitor (FC) boost topology (solid and dashed blue line) shows always higher efficiency as the symmetric boost (solid and dashed green line). Both use the same components and therefore have the same module price. The first conclusion to be drawn is that the flying-capacitor topology has the best price and performance ratio compared to symmetric and two-level boost topology. 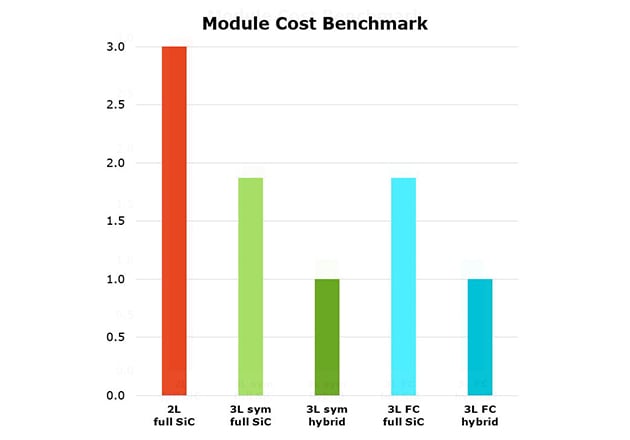 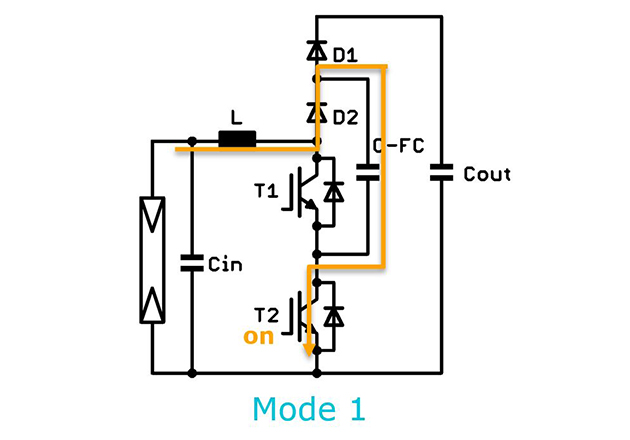 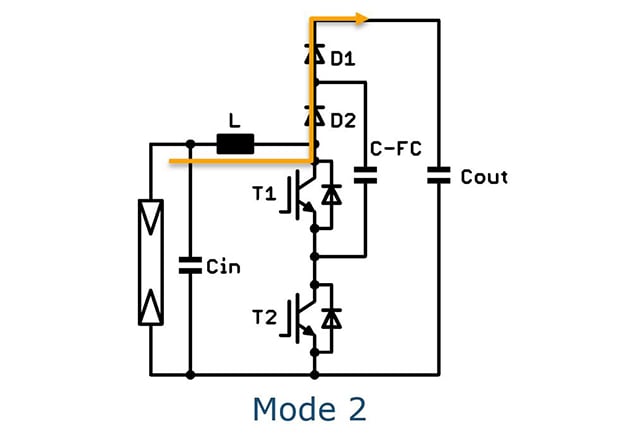 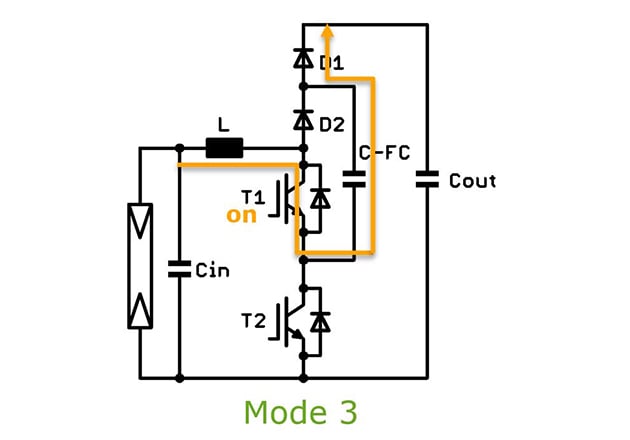 The two-level boost and three-level symmetric boost topologies are already well described in the literature and considered as state of the art. In the following section, the flying-capacitor topology is discussed.

The two semiconductor switches T1 and T2 in the flying-capacitor topology are controlled on phase opposition (180° phase shift), but with identical on time (duty cycle). During normal operation, T1 and T2 are never turned on at the same time. In continuous conduction mode (CCM) the duty cycle (D) can be calculated to 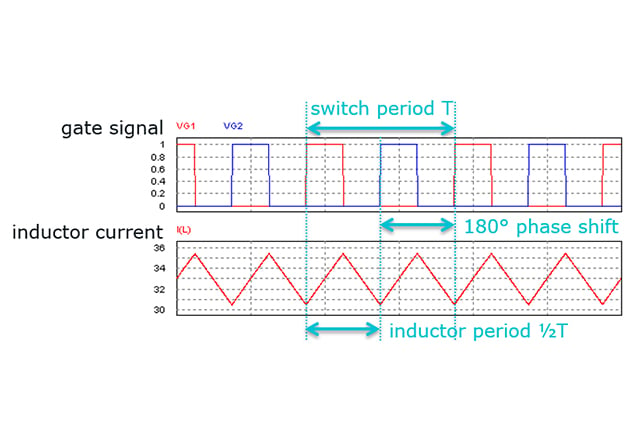 The flying-capacitor boost topology allows for an existing choke design with fixed inductivity and ripples current to halve the PWM frequency (case 1 in Figure 10). In the first approximation, this will also half the semiconductor switching losses and increase the power module efficiency. Figure 4 illustrates case 1 for 40 kHz inductor current frequency: The efficiency can be increased from 98.8% (symmetric boost stage) to 99.24% (flying capacitor boost stage). 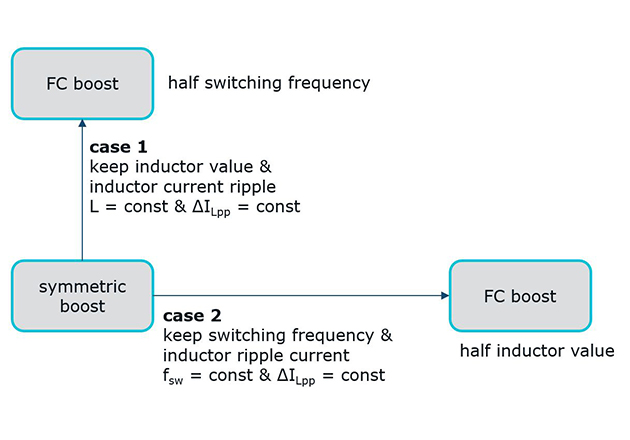 Another potential for optimization is to keep the power module losses constant (same module efficiency), but increase the inductor current frequency (case 2 in Figure 10). Figure 4 shows for case 2 that the efficiency is not changing when the inductor current frequency is doubled from 40 kHz (symmetric boost stage) to 80 kHz (flying-capacitor boost stage).

Moving from two-level to three-level will reduce the voltage across the inductor to half value:

Moving from symmetric boost to flying-capacitor boost topology will double the inductor frequency or half the on-time: