Integration of wide bandgap (WBG) semiconductor devices as a replacement for silicon technology in multiple technological applications is a growing market that can provide efficiency and power density improvements which have a large repercussion in energy and cost savings [1]. WBG offers significant advantages such as higher switching frequency, lower power loss,  and higher power density. Read on to learn more about the wide array of applications of WBG based semiconductor devices.

WBG materials will power future applications for high performance in the areas as illustrated in Figure 1. There are critical applications that benefit more from SiC versus GaN in some cases but mostly it is evident that they benefit from either of the WBG material-based implementations more than the traditional silicon-based counterparts. Some of the applications in addition to those illustrated in the figure include solar power solutions, single-phase string inverters, three-phase string inverters, harnessing the wind power, auxiliary power, core power, hot-swap, server rack power. Some other applications are transportation electrification solutions like EV auxiliary power, traction inverters, EV charging, starter generator, and onboard charger. 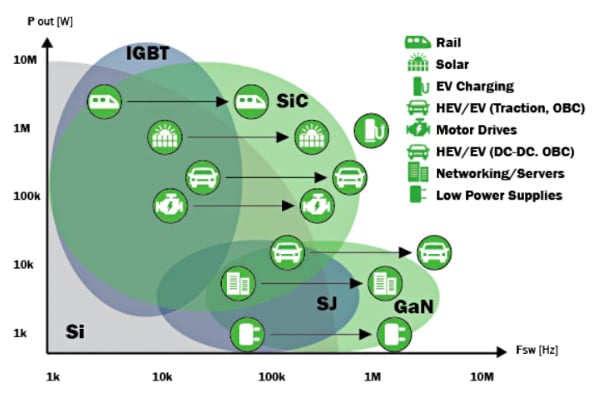 The high impact opportunities for WBG based devices are enormous. The application space includes motor drives that account for approximately 40% of the total United States electricity demand. It is estimated that 40 to 60% of the currently installed electric motors could benefit from the variable frequency drives (VFD) which enable efficient adaptation to speed and torque demands [1]. Depending on the application, incorporation of VFDs can reduce energy consumption by 10 to 30%. It is known that the conventional VFDs utilized for high power applications are bulky and occupy a significant amount of space. Size, power density and efficiency can be enhanced while reducing the overall system cost by using WBG based VFDs.

It is known that the energy consumption in data centers accounted for approximately 2% of the total electricity use in the United States in 2014. The power delivery architecture for most of the modern data centers consists of a line frequency transformer, a low voltage power distribution network, a centralized backup unit, and inefficient voltage regulators. The strategies that are used to improve the energy efficiency range from integration of lower loss power converters to complete redesign of the power delivery network. However, the complete redesign of the power delivery network involves converting higher voltages at the rack level where space is limited and proper thermal management is imperative. It is crucial to note that the high power density converters that are based on WBG devices can be key enablers for more efficient systems as higher temperature tolerance can reduce cooling loads and further boost the data center grid to chip efficiency.

Aerospace industry is another area where WBG based devices can be effective. It is known that longer, thinner and lighter wings can reduce the fuel consumption and carbon emissions by 50% relative to the current commercial aircraft. Achieving this would reduce a lot of energy per year but would need a transformative wing design that requires electromechanical actuators [3]. These are expected to be small and light weight with robust operation over a wide temperature range. Further, electrification can reduce weight and increase efficiency. WBG based converters offer a pathway towards achieving significant energy savings in the air transport industry as well.

In electric grid based applications like renewable energy integration (mostly solar and wind), as well as emerging fields of high voltage direct current (HVDC) and flexible alternating current transmission systems (FACTS), power conditioners are required in order to control the flow of electricity. This is achieved by supplying voltages and currents in a form that is optimally suited for the load. Traditional silicon based power electronics are responsible for a loss of approximately 4% of all the electricity generated in these applications and are deemed to be the dominant point of failure for installed systems. Novel WBG based electronic circuits present a route to lower system level costs by operating at higher switching frequencies that reduce the size of the passive components and lower the overall system footprint. In addition, these circuits will increase the system level efficiency by allowing PV arrays to operate at higher voltages. This in turn will enable DC systems with fewer voltage conversions or transformers thereby replacing the traditional combiner boxes with DC-DC converters [4].