An Introduction to Utilizing the AVSBus Interface in Power Design

An Introduction to Utilizing the AVSBus Interface in Power Design

This article discusses the advantages and benefits of AVSBus, a protocol for DVFS for faster clock speed and lesser switching losses.

In all forms of today’s electronics, the goal is to maximize performance while using the least amount of energy. For a smartphone, this is all about customer satisfaction by providing a responsive device with a battery that lasts all day. For servers, routers, and storage in data centers, customers need high availability and quick response and the operator needs to minimize both capital and operating expense. For today’s computing equipment, the energy bill is a large part of the operating cost and everyone is interested in minimizing energy consumption without sacrificing performance.

The Challenge of Minimizing Power Consumption

For years power consumption could be minimized by reducing the CMOS feature size and operating at a lower voltage. However, as feature size was reduced the savings in reduced power due to switching the capacitance of the transistors became matched by the off-state leakage current. Now to minimize power consumption, a processor or other larger digital device (such as a large ASIC or FPGA) have to quickly shift between a low power idle or sleep mode and a high-performance mode. In low power mode, the device have to both minimize its operating voltage to reduce leakage losses and minimize the clock frequency to minimize switching losses. When a high-performance mode is needed, the supply voltage has to be ramped as fast as possible to the higher voltage needed to support the higher clock speed and then the clock frequency has to be increased. This approach to optimizing power consumption is called dynamic voltage and frequency scaling (DVFS) as illustrated in Figure 1.

Years ago, Intel implemented this in their high-performance processors. The processor communicated with its power supplies via a proprietary high-speed serial bus (“Serial VID”). Other manufacturers were left to devise their own means of implementing DVFS.

In 2012, Juan Arango and Travis Summerlin of Texas Instruments (TI) developed a protocol for DVFS called AVSBus (Adaptive Voltage Bus). In January 2013, TI offered this AVSBus protocol to the System Management Interface Forum (SMIF), who owned and managed the SMBus and PMBus standards, for inclusion as an extension of the PMBus. The SMIF accepted and after further development in the PMBus Specification Working Group, the AVSBus was released in March 2014 as part of Revision 1.3 of the PMBus standards. It is now made available to any PMBus adapter, a non-proprietary high-speed bus for controlling power converters and implementing DVFS in any digital IC.

For DVFS to be effective, the power converter must change its output voltage very quickly as seen in the digital IC load. For a digital device operating with a clock frequency measured in GHz, a power converter that takes hundreds, or even tens of milliseconds to respond will be seen as glacially slow. When transitioning to a low power mode, the digital device must lower its clock frequency immediately as it does not know exactly when the supply voltage will be lowered.

If the transition time for the supply voltage is long (meaning even hundreds of µs), then power is being wasted. When the digital device needs to return to high power, high-performance mode, it must wait until the supply voltage is at the required higher level before increasing the clock frequency. This delay reduces the performance. 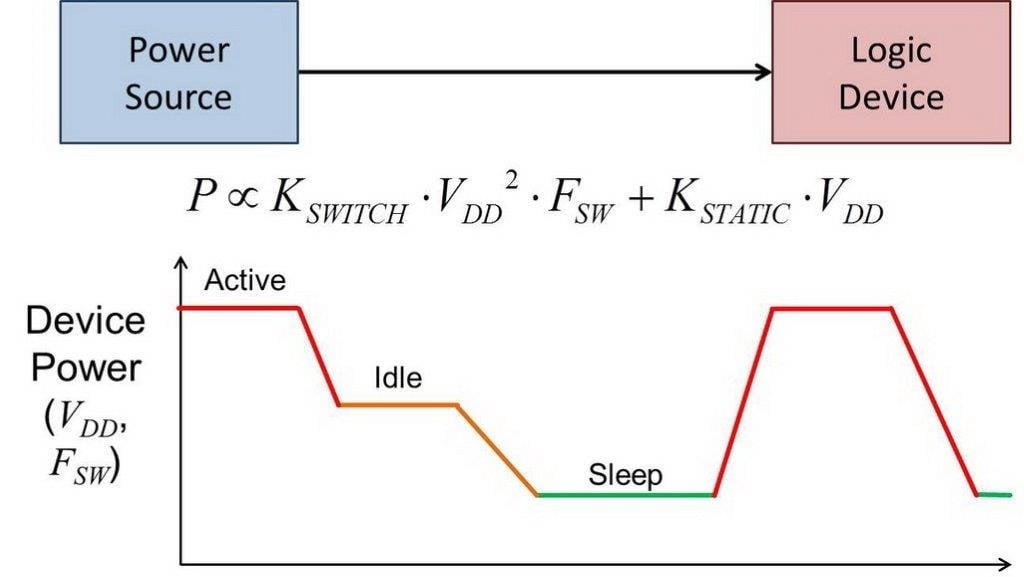 There are three elements to the delay from when a digital device issues the command to change voltage until the voltage has reached the new desired value:

As for the time it takes the power stage to respond, that is being addressed by efforts to drive the switching ever higher. This reduces the size of the output filter inductor and allows the output current slew faster for a given input and output voltage.

The other two factors, communications delay and command processing time are addressed by the AVSBus.

While it would have been good to use the existing PMBus protocols for communicating DVFS commands from a digital device to its power converters, it is just too slow. At the typical PMBus speed of 100 kHz, it would take about 360 µs just to send the command. The PMBus protocol, which was designed to be applicable for a wide range of devices, was also not optimized for processing commands in nanoseconds. Even if the bus speed were pushed to 1 MHZ, maximum allowed in the PMBus 1.3 standard, the 36 µs to transmit the voltage command is very slow by the digital device standards.

AVSBus addresses the communications delay in two ways: a maximum bus speed of 50 MHz and a fixed, 32-bit frame. Operating at the maximum bus speed, the command to change voltage can now be sent from a digital device to its power converter in 640 ns. The cost of the interface is kept low by using a standard SPI-like physical layer (PHY). For now, this does limit the AVSBus to point-to-point communication between a digital device and its power converter but as discussed below, this is not a significant limitation.

The AVSBus addresses the processing delay by using a simple, efficient command set that is optimized for this application. This means that minimal logic is needed to decode the received command and generate the control signal to the power stage requires. With a good design and moderate clock speeds in the power controller IC, the command processing can be completed in tens of nanoseconds. 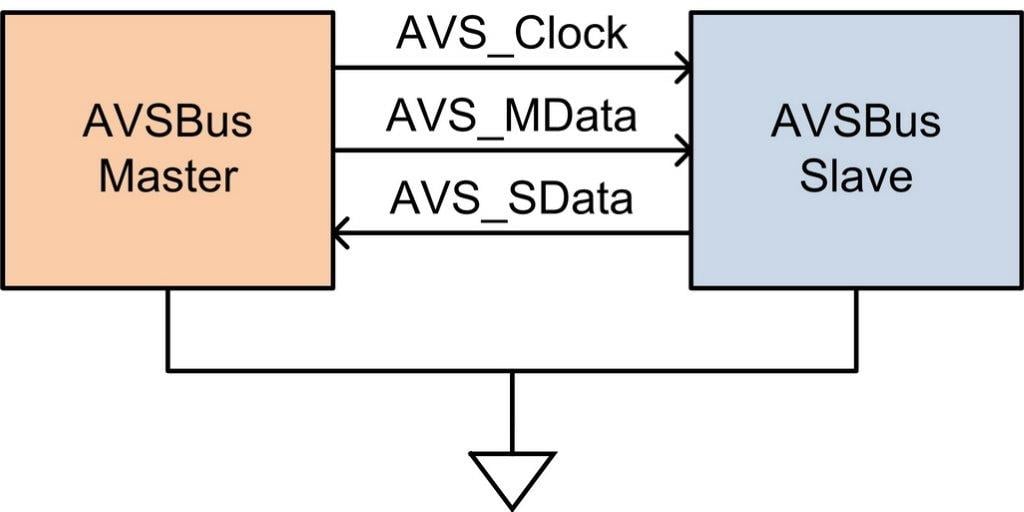 For digital devices that need to control more than one rail, there are two options. The first is simply to have as many AVSBus ports as rails that need to be controlled. We think the preferred option is going to be a single AVSBus communicating with a power management IC (PMIC) that has multiple power controllers, as shown in Figure 3. The AVSBus specification provides for addressing up to fifteen separate power rails over one AVSBus.

It is also possible to have a system with both PMBus and AVSBus, as shown in Figure 4. In this case at power up, the rail voltages will be set by the default PMBus output voltage settings. Once operating, the PMBus master can transfer control to the AVSBus master. The PMBus master, if need be, can also take back control from the AVSBus master. How these control transitions are managed to avoid glitching the rail voltages is described in the AVSBus and PMBus specifications. 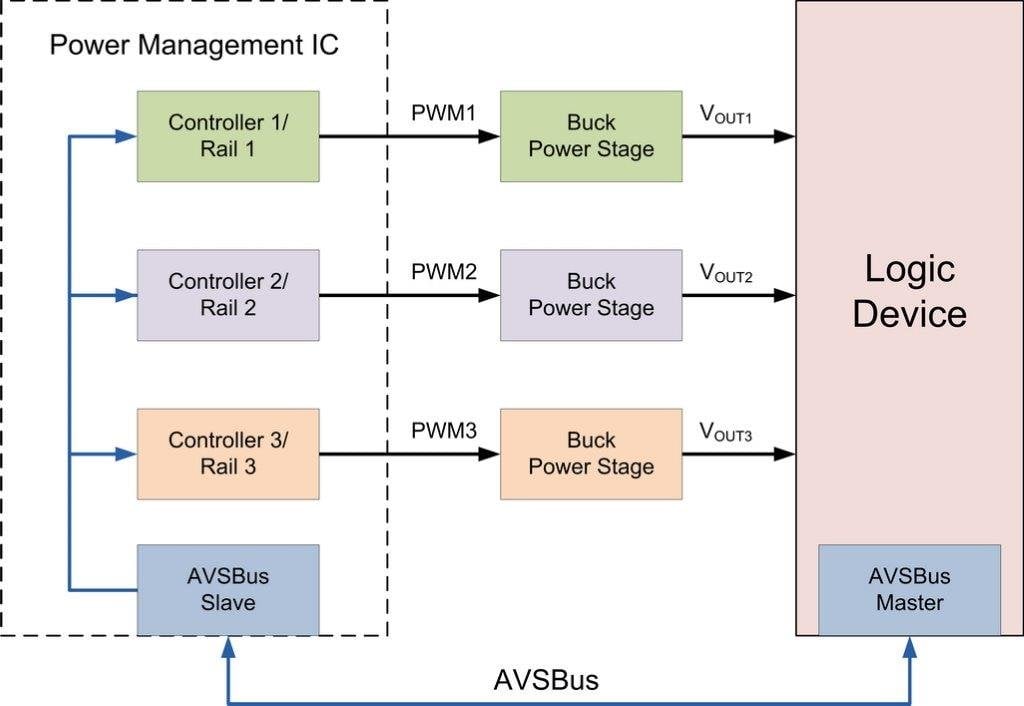 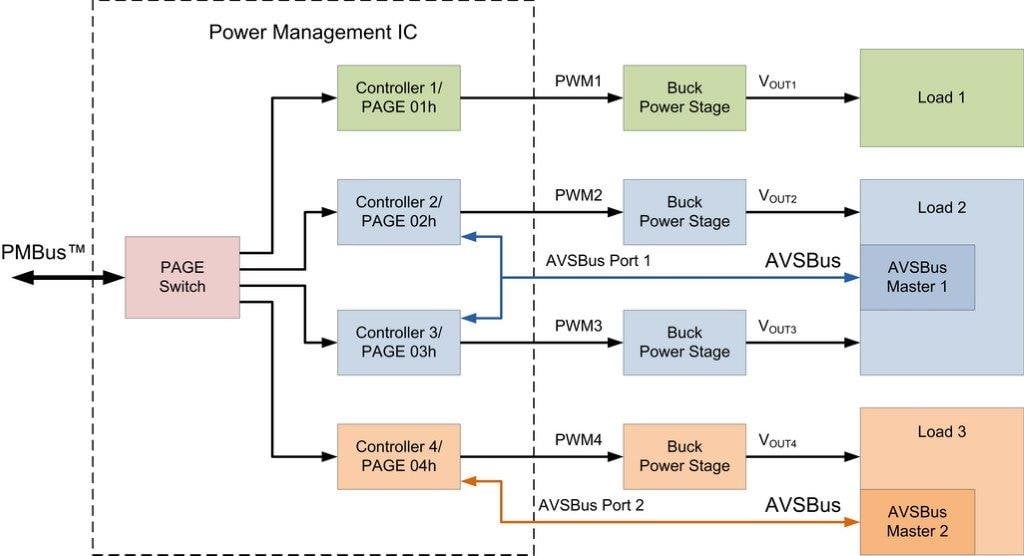 AVSBus data is always transmitted in 32-bit frames. When the AVSBus is idle, all data lines are high. A data transmission starts when the master data signal, AVS_MData, transitions from high to low. It stays low for one bit and then goes high for one bit to complete the start of the transmission. The device sending data, such as a master transmitting a frame to a slave, launches the data on the rising edge of the clock. The receiving device captures the data on the falling edge of the clock. The last three bits of every frame is a cyclic redundancy check (CRC) that provides good assurance that the fame has been received uncorrupted.

If the system is using the full three wire AVSBus with the AVS_SData line, then every time a master sends a frame to the slave, the slave must respond with a frame that includes a two bit ACK field and a five bit status field. If the master had sent a Write Frame and no data was requested from the slave, then most of the bits in the frame sent by the slave are set to 1. If the master had requested data, then the slave returns that data. The format of a slave-to-master frame that includes returned data is shown in Table 3.

The bit Acknowledge field from the slave to the master provides a significant advantage over the one bit ACK/NACK of I²C/SMBus/PMBus systems. With just one ACK/NACK bit, if a slave does not acknowledge (“NACKs”), the master is unable to know why. It might have been because the received data was corrupt, the received command or data was not valid, the device might have had an error processing the received data, or the slave might have been too busy to process the incoming transmission. The two-bit acknowledge of the AVSBus provides some additional information whether a frame was properly received and processed or not, and if not, why not. The two AVSBus Acknowledge bits indicate:

Table 3: AVSBus Status Response Frame Bit Fields When Data Is Being Returned To The Master

The goal of AVSBus is to be very fast. This means that the command set, unlike the PMBus which is intended to cover a wide range of power converters, is narrowly focused. There are only nine commands available. The main command is used to set or read the rail voltage. To further simplify the implementation, the resolution of the command is fixed at 1 mV/bit. This gives a range of possible output voltages from 0 V for a command value of 0000h to 65.535 V for a command value of FFFFh.

There is also a command to read the slave status, version of AVSBus the slave supports, and there are provisions for manufacturer specific commands.

Where To Get The AVSBus Specification and Support:

Large, fast digital devices such as processors, ASICs, and FPGAs use dynamic voltage and frequency scaling to minimize energy consumption. The AVSBus is now offered by the System Management Interface Forum as a non-proprietary protocol for these devices to manage the converters supplying them with power. The AVSBus has been designed specifically for this task offering high speed transmission, a task focused protocol and command language, and low cost. PMICs supporting AVSBus are already in the market and it is expected that many more will be announced in the coming months.

The System Management Interface Forum is an industry Special Interest Group (SIG) composed of more than 35 member companies and adopters who work together to develop, implement and promote standardized communications protocols. The PMBus and AVSBus name and logo are trademarks of SMIF, Inc. Commercial use of the PMBus and AVSBus name and logo is restricted to PMBus adopters. Refer to the PMBus.org website for additional details.

Bob White has more than thirty years of experience in power electronics. He is well known for his work in digital power, power system architecture, and the application of wide bandgap devices. His work at Artesyn Technologies became the starting point for the development of the PMBus standard. He led the PMBus Specification Working Group for many years and remains the editor of the PMBus and SMBus specifications. He has his own consulting company, Embedded Power Labs. He holds a BSEE from MIT, a MSEE from WPI, and is a Fellow of the IEEE.