A New Approach to Current Measurement for High Power Applications

A New Approach to Current Measurement for High Power Applications

The power utilities business is changing globally. Where once the main providers of electrical power were coal, gas, oil or even nuclear power stations, today renewable sources of power, such as wind and solar are becoming significant. 2020 was the best year on record for wind, with 93 GW of new capacity installed globally, representing – a 53 percent year-on-year increase. And this trend is set to continue as the world aims to achieves net-zero for carbon emissions by 2050

A new report published by the Global Wind Energy Council (GWEC) argues that the world needs to install wind power three times faster over the next decade in order to avoid the worst impacts of climate change.

This is driving huge changes in all aspects of the electrical power industry, including the methods used to measure large currents. The great advantage of traditional fossil fuel power stations is that the supply is very stable and can be controlled and regulated easily. With renewables, the source of the electrical power is volatile - power is not generated unless, for example, the wind blows. DC currents from photovoltaic installations or the power converters used in other renewables can be injected into the traditional AC grid, therefore conventional large current measurement techniques are not appropriate

Another associated trend concerns large batteries. In order to use electrical power when it is required - not just when it is being generated - huge battery systems are being constructed. One particularly apposite example is to be found in Monterey Bay, California, where the Moss Landing Power Plant, once California's largest electric power station fuelled by natural gas, now houses the world's largest battery, storing excess energy when solar panels and wind farms produce electricity and feeding it back into the grid when they are idle. Phase 1 of the renamed Moss Landing Energy Storage Facility began operation in December 2020 with a capacity of 300MW / 1,200MWh. Phase 2 of the project, due for completion in August 2021, will add another 100MW / 400MWh. Such enormous installations also require very accurate high current measurement. Again, conventional methods have proved to be inadequate for the task.

Instead, applications requiring the measurement of currents above 5kA are increasingly looking at zero-flux techniques that use the magnetic field generated by the circulation of the current, such as Danisense’s Fluxgate technology.

To explain the operation of zero-flux technology, it is appropriate to first consider some basic principles. In Figure 1, a pick-up coil constructed around a magnetic bar is shown top left; at top right the equivalent electric circuit is shown with a resistor and an inductance. When a voltage is applied, the current in the circuit is shown in the red curve. The current grows progressively, following the slope according to the value of the inductance, up to the point where the inductance saturates. At this condition, the equivalent electric circuit can be considered to be resistive only.

When creating a zero-flux current transducer, the material used for the pick-up bar has specific magnetic properties which cause the current to follow the blue curve. Initially, the current grows slowly due to a high impedance value. Then, abruptly, the inductance saturates and the current increases very rapidly to achieve the endpoint as previously. 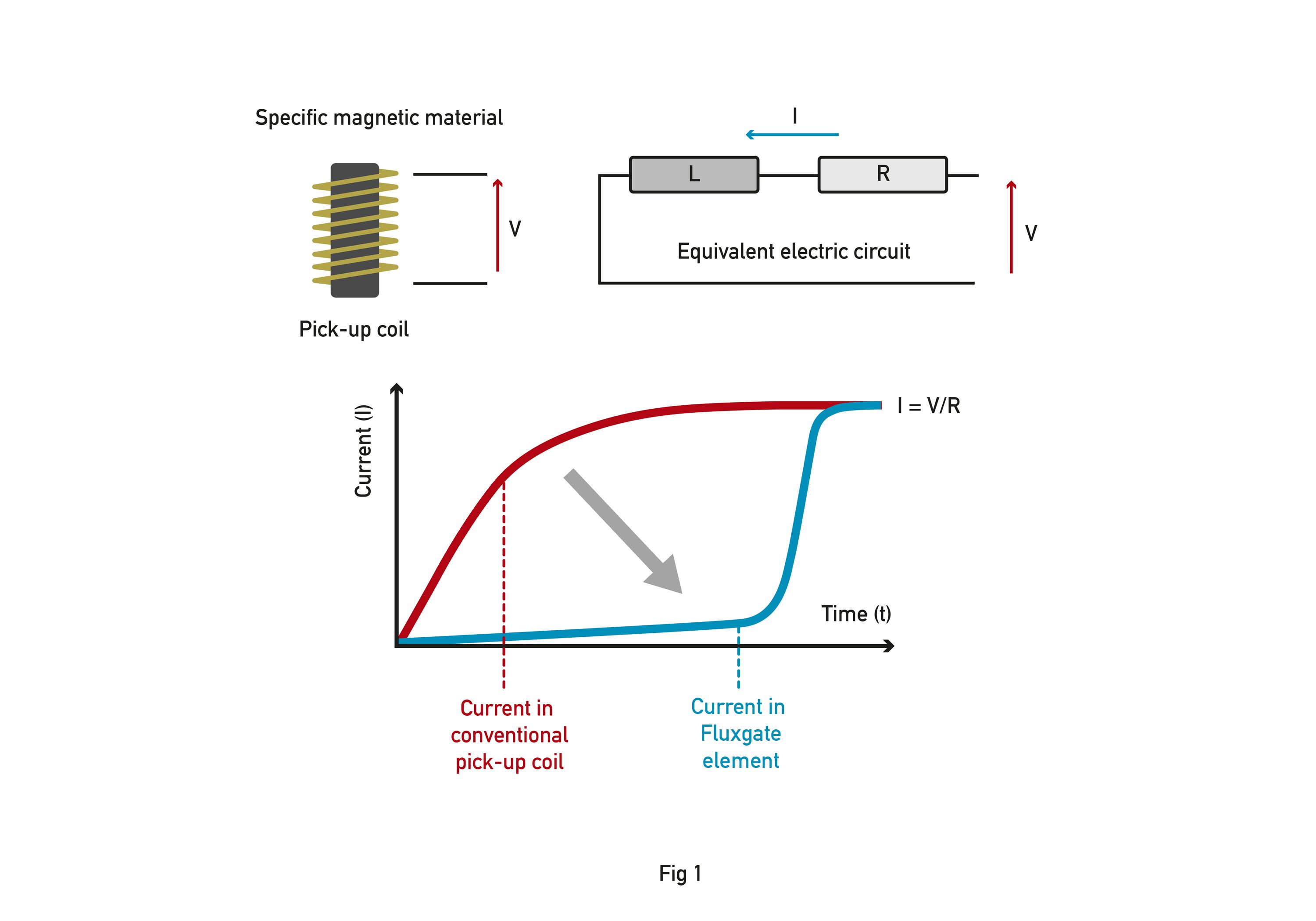 If a square voltage signal is now applied, the profile of the current becomes a succession of positive and negative saturation and desaturation cycles. If a conductor is placed close to the Fluxgate element, the circulation of the current will create an additional magnetic field which will influence the signal by shifting the zero position (Figure 2a – blue curve). Finally, signal processing performed on the second harmonic reveals details about the primary current (Figure 2a – purple curve). 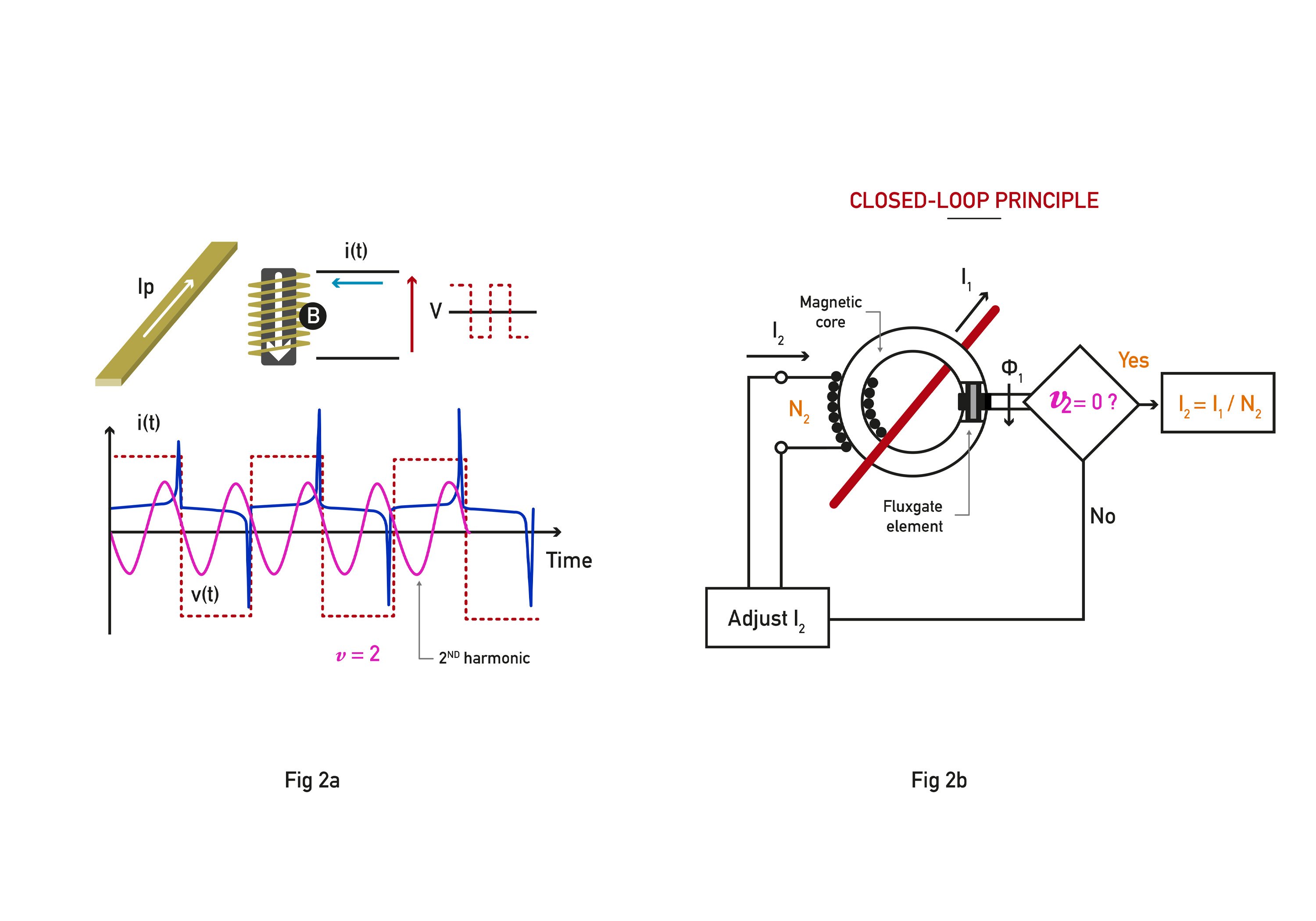 Figure 2. Shifting the zero position (2a); Closed-loop principle (2b).

To improve the performance of the current sense transduced even further, manufacturers often combine zero-flux technology with the closed loop principle, shown in Figure 2b. Here, the Fluxgate element is placed in the air gap and during the measurement of the magnetic field, the current output is re-injected through the secondary winding which then generates a magnetic field in the opposite direction. Using this method, the magnetic field experienced by the Fluxgate is always zero, eliminating offset and linearity issues.

Four main zero-flux topologies are currently available (Figure 3). The first (3a) is based on a magnetic core with an air gap, plus the secondary winding. It resembles a closed loop Hall Effect current transducer, where the Hall element in the air gap has been replaced by the Fluxgate. The main benefit is a good offset drift. The second topology (3b) is a single core which takes the role of the Fluxgate element. As there is no air gap, one of the key benefits is its EMC robustness and also its high resolution. But as the saturation of the core occurs quickly, the bandwidth is limited to a few Hertz. The third topology solves this issue by adding a winding core (3c) which only measures the AC signal, as with a current transformer. In that case, you get all the benefits. However, if an even higher performance is required, a ‘balanced core’ (3d) topology employs two identical Fluxgate elements placed in opposition. Therefore, whatever the external environment conditions – such as EMC or temperature variations - there is a natural passive compensation between the two sensing elements. Using this approach, it is possible to achieve a measurement accuracy of 1ppm, even in harsh environments. 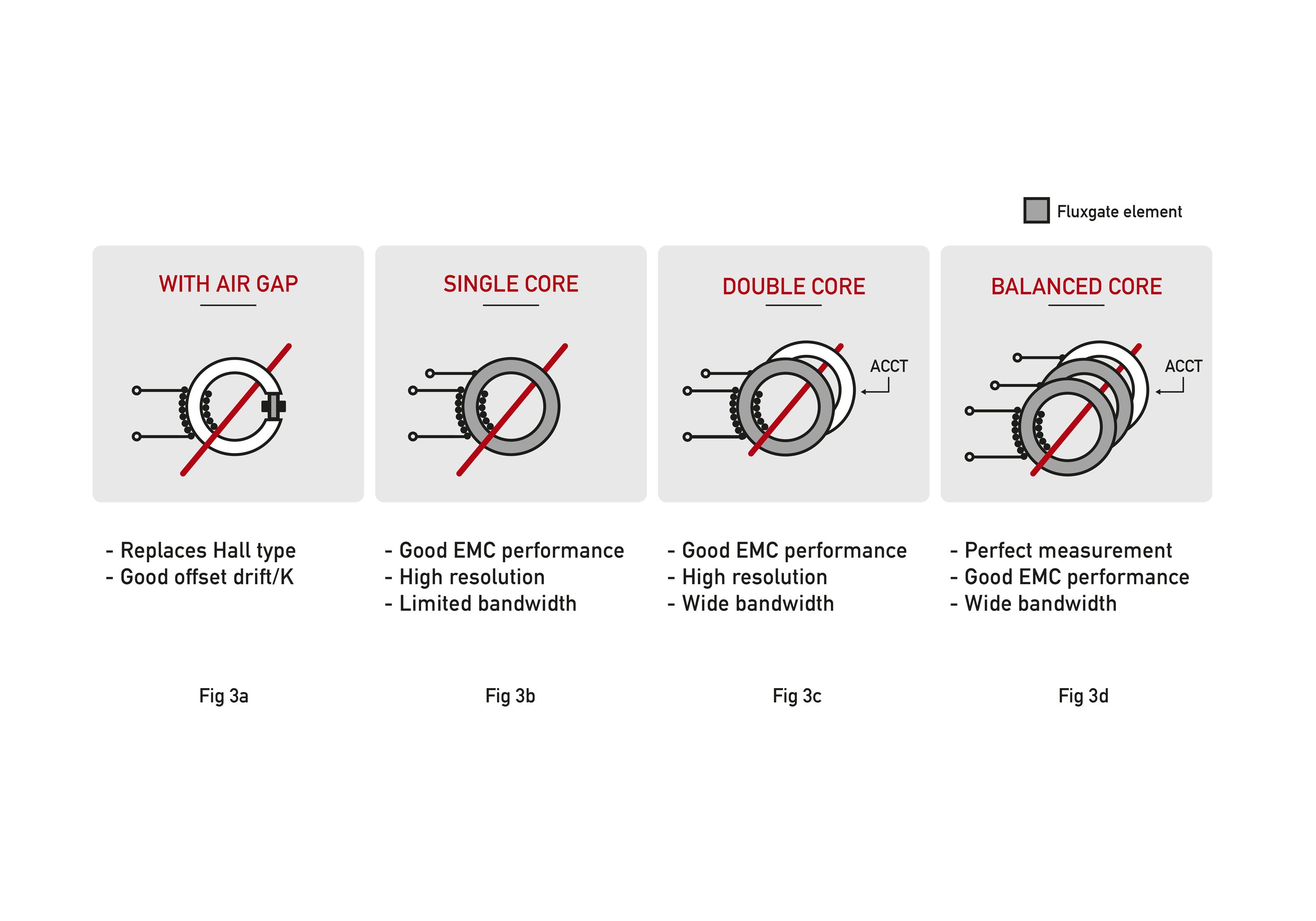 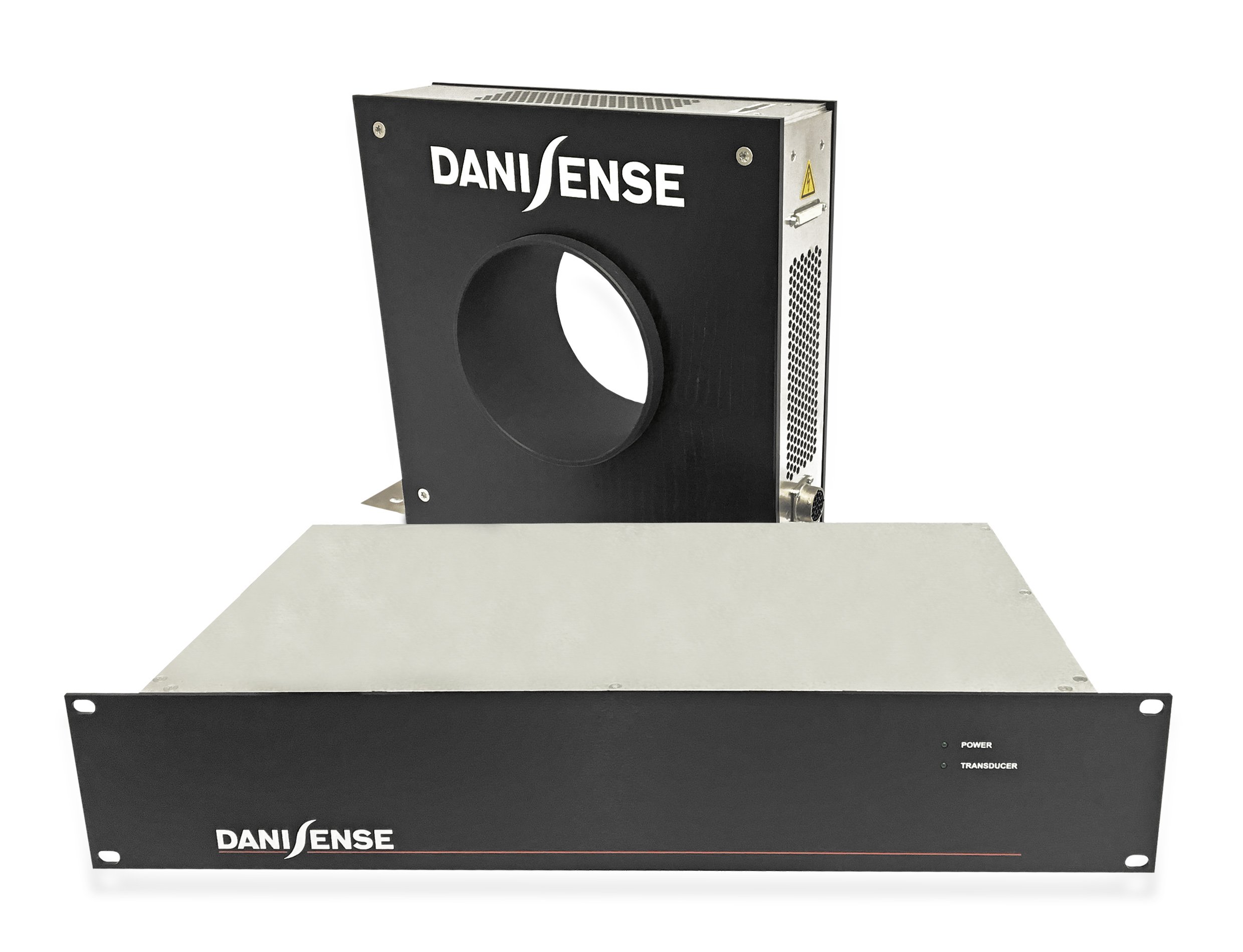 Fluxgate technology can be used to provide very accurate, stable and repeatable current measurement for all current levels and Danisense has developed a family of current sense transducers covering 0-600A, 600-3000A and above 3kA. For the emerging markets with very high currents as discussed in the first part of this article, Danisense has had to address new challenges, but is currently developing solutions up to 30kA and can see no theoretical limit for the Fluxgate approach.

The sensing head is a rugged, passive device that can be positioned and left for long periods in noisy electrical environments without being affected by any interference which will inevitably be present, given the high currents involved. The complex signal conditioning and processing can be done remotely in a safe, temperature-controlled benign laboratory environment, which can be 30m away from the sensing head. By separating the functions of the current sense transducer in this way, the passive sensing head can also be made rugged enough to cope with challenging environmental conditions. Also, it is dangerous to work close to a high magnetic field environment so this approach minimizes the need for operators to manipulate the transducer – for example to connect the power supply and the output - in the magnetic field, increasing safety.

Danisense’s new high current transducers also feature a low excitation frequency of 7kHz. For smaller products, a much higher excitation frequency of up to 32kHz is preferred as this improves the dynamic performance. However, for the DR series sensors saturating such big magnetic core with high frequency would require high power circuitry which can be large and expensive. By reducing the frequency Danisense has been able to achieve a good balance between dynamic performance and power level. 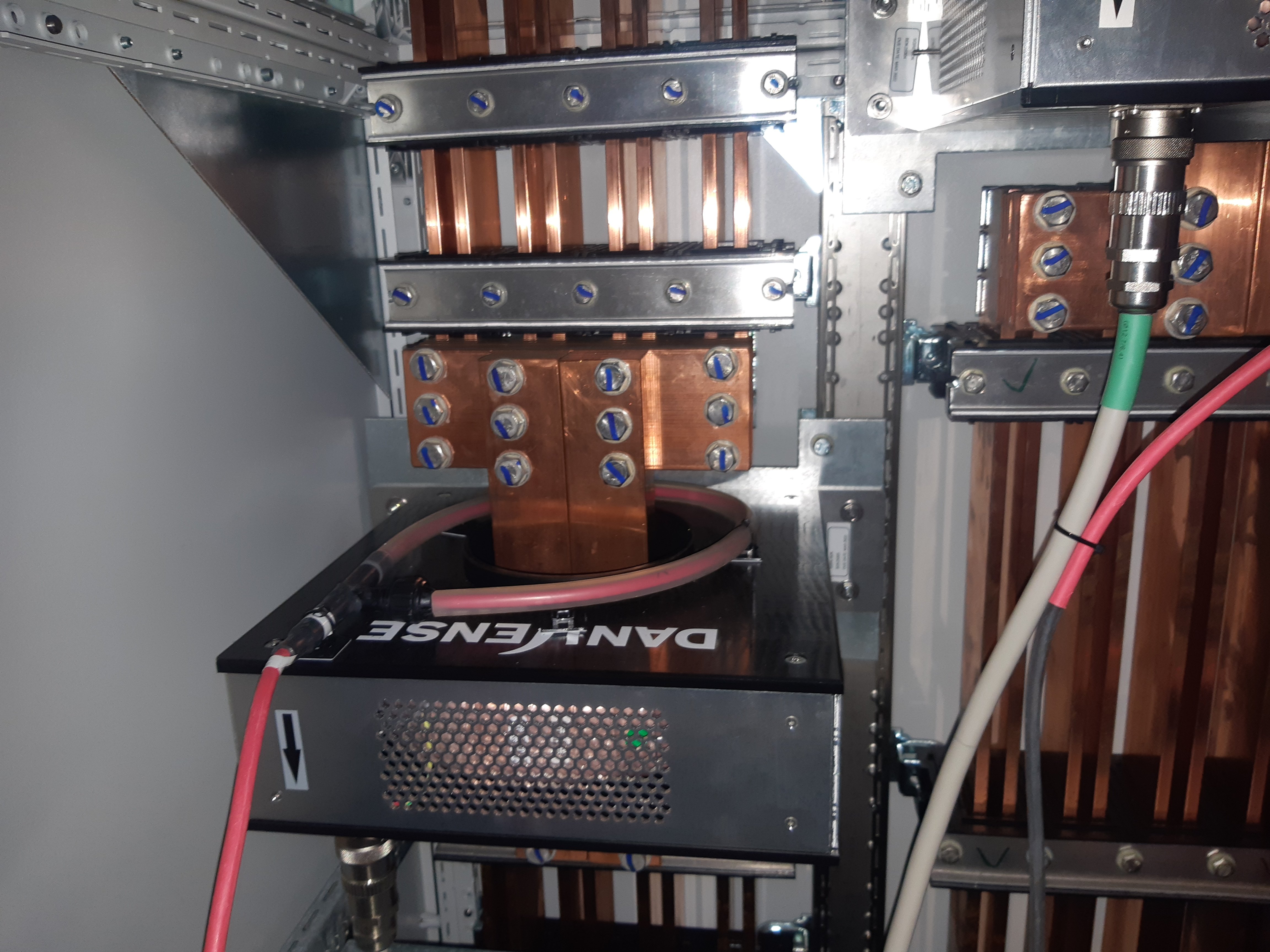 A specially designed cable with multiple twisted pairs featuring individual shielding encompassed by a second overall shielding layer is used to connect the sensing head and the electronic processing stage. If the distance between the head and the processing unit is over 30 meters Danisense uses three wires for the compensated current instead of one to reduce the current value and then the impedance effect. 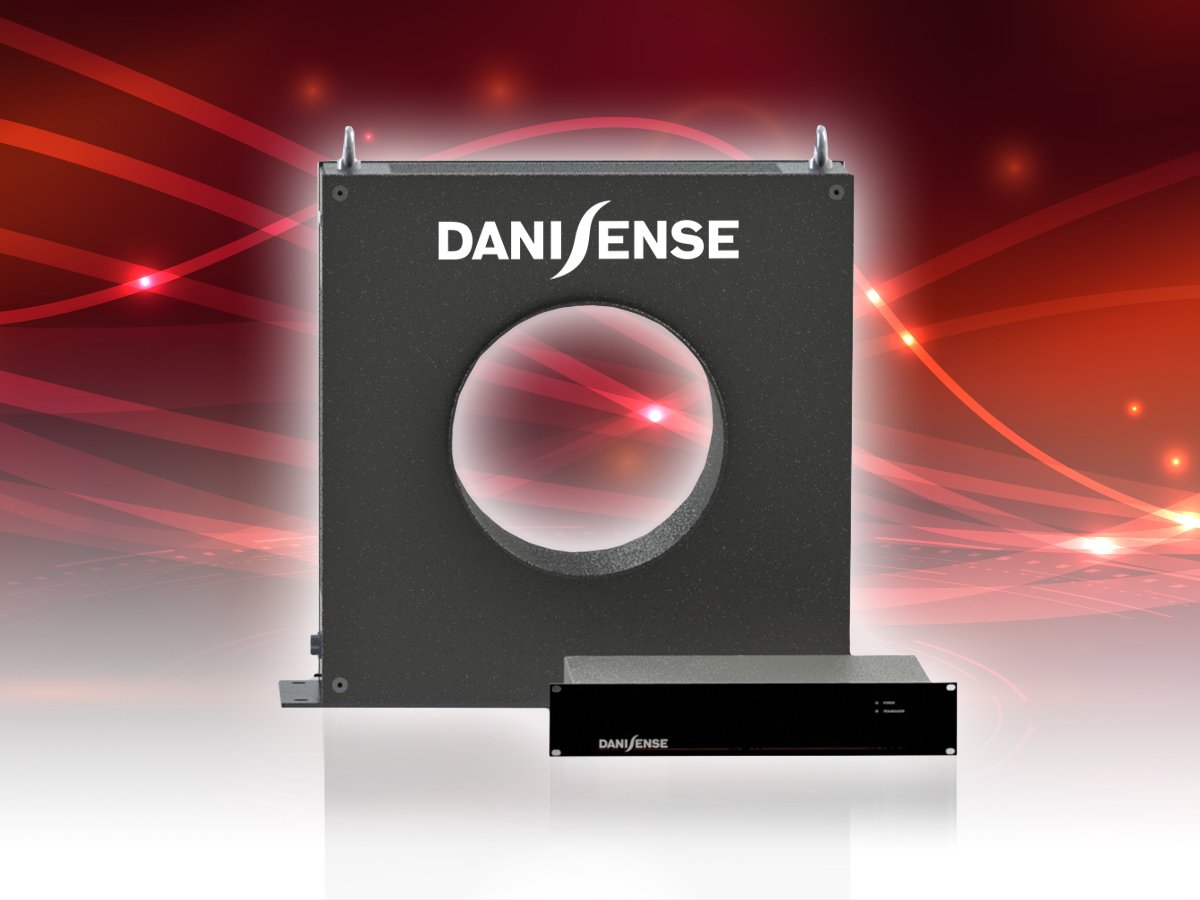 Figure 6. 3D render of the new 30kA sensing head which will be available shortly

Danisense’s DR50000IM and DR10000IM current sense transducers have a high bandwidth of 100kHz and are ultra-stable with a linearity error of only 1ppm. The company also offers equivalent voltage output versions of these transducers - DR50000UX (8kA) and DR10000UX (11kA).

With the introduction of the smart grid, utilities companies and others are having to reconsider the current measurement techniques they employ, because electrical power is being generated from a much wider range of sources that ever before. Danisense’s Fluxgate technology – already employed extensively in applications such as MRI scanners, EV charging stations and large physics institutions such as CERN – is proving equally capable of handling high currents in the tens of kiloamperes, delivering accurate, stable and repeatable measurement results. Danisense knows that in the near future there will be a need to measure even higher currents, and will shortly launch a current sense transducer with the capability of measuring up to 30kA (Figure 6). This will feature a 330mm aperture - the largest ever offered by Danisense - which will also be of interest to companies which have a lower current demand but which have large diameter cables.