VoltServer, the inventor of a new form of power called Digital Electricity™, announced today that it has raised a $7.4 million Series A, supported by Alphabet's Sidewalk Labs. The funding will allow VoltServer to expand its Digital Electricity™ (DE) offerings at scale, powering the digitally connected world in a safer, more cost effective and efficient way than traditional ac and dc electricity.

DE is made up of discrete packets of energy and data and efficiently runs on cables that are thin, safe, inexpensive, flexible and data-enabled, making DE a well-suited powering solution for complex and evolving infrastructure systems. With enough power to energize a hi-rise or a football stadium, VoltServer's technology is already installed in over 700 venues, and will continue to expand its offerings beyond communications infrastructure to power entire buildings.

"There has not been much innovation around electricity since Tesla and Edison battled it out in the late 1800s," said Stephen Eaves, CEO of VoltServer. "But Digital Electricity™ allows for controlled power distribution that is safe, less expensive, faster to install, more energy efficient, and perfect for an increasingly digital world. At scale, VoltServer's technology will make buildings less expensive to construct, operate, and change over time."

Voltserver is aiming to commercialize the distribution of electricity in natively digital format. The technology combines energy and data into energy packets and transfers hundreds of packets each second from a VoltServer transmitter unit to a receiver unit. The transmitter verifies the transfer of each packet. If there is improper wiring, a short circuit, or a person is touching the transmission lines, the transmitter recognizes the condition in 0.003 seconds and will not send any more energy packets.

The result is touch-safe electrical transmission at high power levels and an inherent ability to digitally control a host of modern electronic devices connected to the distribution system. 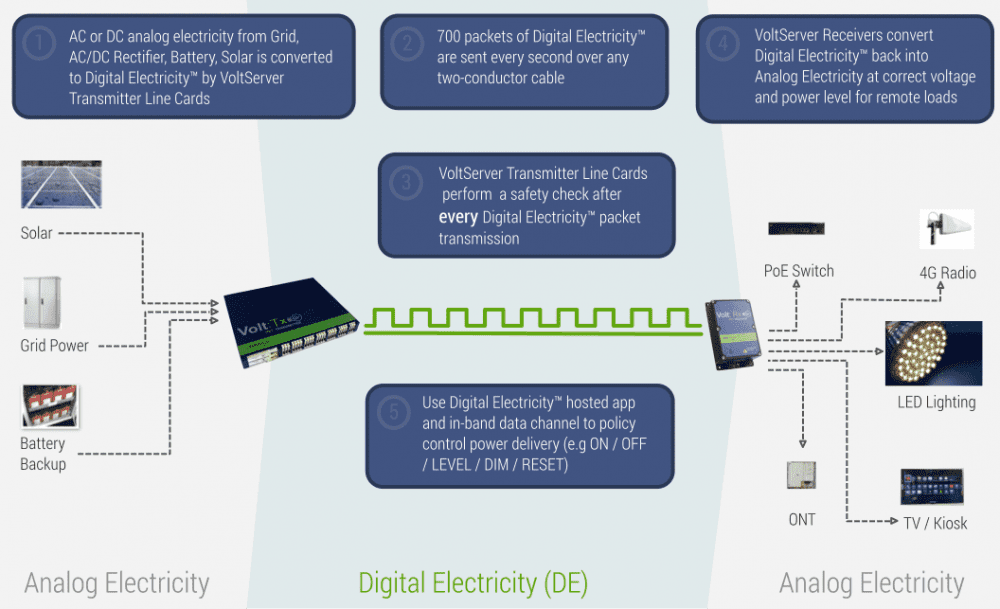 "Electricity powers our world, but the fundamental danger inherent in AC or DC electricity makes today's electrical systems expensive to install or change. Digital Electricity™ is a breakthrough, offering a less expensive, safer and more efficient way to distribute electricity that can make buildings more affordable and flexible. Over time, that can make cities more affordable, sustainable, and adaptable as our needs change," Dan Doctoroff, chairman and CEO of Sidewalk Labs said.