The 10 largest suppliers of analog ICs accounted for 60% of worldwide analog sales last year, or $36.1 billion, compared to nearly 61% in 2017, or about $33.0 billion, according to IC Insights' 2018 rankings of leading semiconductor companies. The April Update to IC Insights' 2019 McClean Report ranks the top 50 semiconductor suppliers and lists leading companies in several major product categories, including DRAM, flash memory, microprocessors, microcontrollers, and analog ICs.

With analog sales of $10.8 billion and 18% market share, Texas Instruments maintained its firm grip as the world's leading supplier of analog devices. TI's 2018 analog sales increased $0.9 billion and were nearly twice those of second-ranked Analog Devices (ADI) and more than 10x those of tenth-ranked Renesas, one of two companies among the top 10 to experience a decline in analog sales. TI's 2018 analog revenue accounted for 78% of its $13.9 billion in IC sales and 72% of its $14.9 billion total semiconductor revenue. 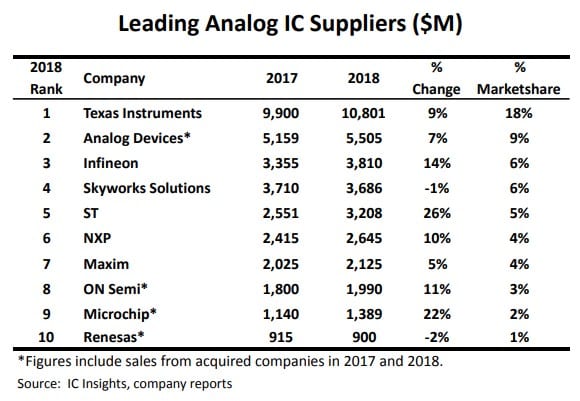 Maintaining second place in the analog ranking was ADI, which registered a 7% increase in analog IC sales to $5.5 billion in 2018. Revenue numbers shown for ADI include sales from Linear Technology, which ADI acquired in 1Q17 for $15.8 billion in cash and stock. No single customer accounted for more than 10% of ADI's 2018 sales. More recently, ADI's largest customer was Apple, Inc., which accounted for 14% and 12% of total revenue in 2017 and 2016, respectively.

Each of Europe's three major IC suppliers was a top-10 analog supplier in 2018. Collectively, the three companies accounted for 15% of global analog market share. Climbing up one position into third place was Infineon, which grew its analog sales 14% to $3.8 billion and accounted for 6% market share. Infineon continues to expand its presence in automotive (43% of 2018 sales) and power management (31% of 2018 sales) applications. Industrial power control (17%) and chip card and security (9%) rounded out its other major end-use applications.

NXP was the sixth-largest analog supplier in 2018 with sales that increased 10% to $2.6 billion (4% market share). NXP sells its analog devices into many system functions but one of its key growth areas is automotive, where its analog chips are essential components in emerging LiDAR, vehicle network, and 5G systems.

Analog sales at ON Semiconductor increased 11% to $2.0 billion, which represented 3% share of the market. ON's 11% increase followed analog sales gains of 35% in 2017 and a 16% rise in 2016. Three years of strong analog sales gains at ON were partly the result of its acquisition of Fairchild Semiconductor in September 2016, and partly due to strong sales of power management products into the automotive market, specifically for active safety, powertrain, body electronics, and lighting applications.

Analog IC sales at Microchip Technology increased 22% in 2018. In May 2018, Microchip closed on its $8.35 billion acquisition of Microsemi, which gave a boost to Microchip's analog business in computing and communications applications.