Singapore scientists from NanoBio Lab (NBL) of A*STAR have developed a novel approach to prepare next-generation lithium-sulfur cathodes, which simplifies the typically time-consuming and complicated process for producing them. This represents a promising step towards the commercialization of lithium-sulfur batteries, and addresses industry’s need for a practical approach towards scaling up the production of new materials that improve energy storage system performance.

While the lithium-ion battery is widely recognized as an advanced technology that can efficiently power modern communication devices, it has drawbacks such as limited storage capacity and safety issues due to its inherent electrochemical instability. At the top of this story is a microscopic image of the newly-developed cathode nanostructure.

This is set to change with a new simplified technique developed by NBL’s team of researchers, in the development of lithium-sulfur cathodes from inexpensive commercially available materials. Sulfur’s high theoretical energy density, low cost and abundance contribute to the popularity of lithium-sulfur battery systems as a potential replacement for lithium-ion batteries.

Theoretically, lithium-sulfur batteries are capable of storing up to 10-times more energy than lithium-ion ones, but to date are unable to sustain this over repeated charging and discharging of the battery.

NBL’s lithium-sulfur cathode demonstrated excellent specific capacity of up to 1,220mAh/g. In contrast, a typical lithium-ion cathode has a specific energy capacity of 140 mAh/g.

In addition, NBL’s cathode could maintain its high capacity over 200 charging cycles with minimal loss in performance. Key to this was NBL’s unique two-step approach of preparing the cathode. 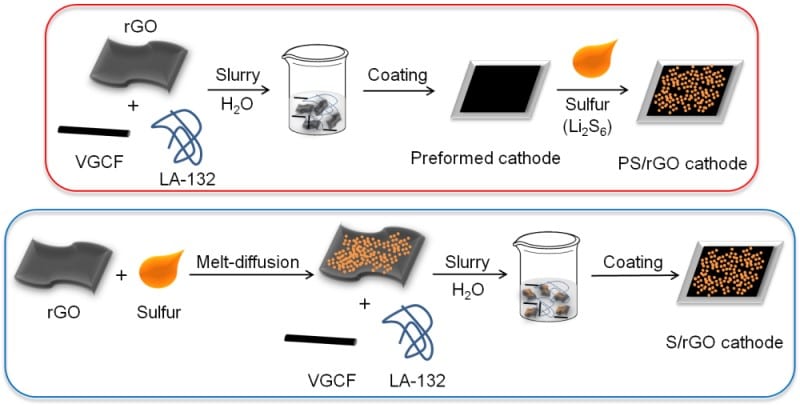 Illustration of NBL’s method of preparing sulfur cathode (top) and how it is conventionally prepared (bottom). (click on image to enlarge)

By first building the carbon host before adding the sulfur source, the researchers obtained a 3D interconnected porous nanomaterial. This approach prevents NBL’s carbon scaffold from collapsing when the battery is charged, unlike those of conventionally prepared cathodes. The latter collapses during the initial charge and discharge cycle, resulting in a structural change.

“We have shown that the preparation technique of sulfur cathodes has a strong influence on the electrochemical performance in lithium-sulfur batteries,” said Professor Jackie Y. Ying, who leads the NBL research team. “Our method is industrially scalable and we anticipate that it would have a significant impact on the future design of practical lithium-sulfur batteries.” 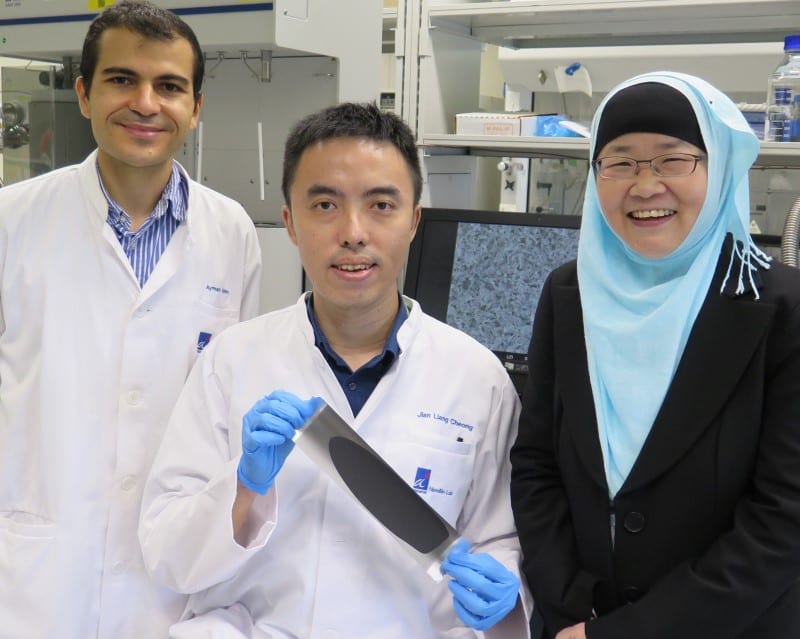 The NBL researchers are working on designing and optimizing not just the cathode, but also the anode, separator and electrolyte through nanomaterials engineering. The goal is to develop a full cell system for lithium-sulfur battery that has superior energy storage capacity, as compared to conventional lithium-ion batteries. Such a new battery system can last much longer than current batteries, and would be of great interest for electronic devices, electric vehicles and grid energy storage.