The company is expanding its solar and battery energy storage power electronics systems manufacturing capacity to 9 GW per annum.

Despite rising costs and continued uncertainty amidst ongoing supply chain hiccups, General Electric (GE) is aggressively expanding its solar and and battery energy storage manufacturing. In response to a strong backlog and a “robust demand outlook,” the company is set to triple production of its large-scale FLEXINVERTER and FLEXRESERVOIR power solutions at its newly launched Renewable Hybrids factory in Vallam, India, the company said in a press release. 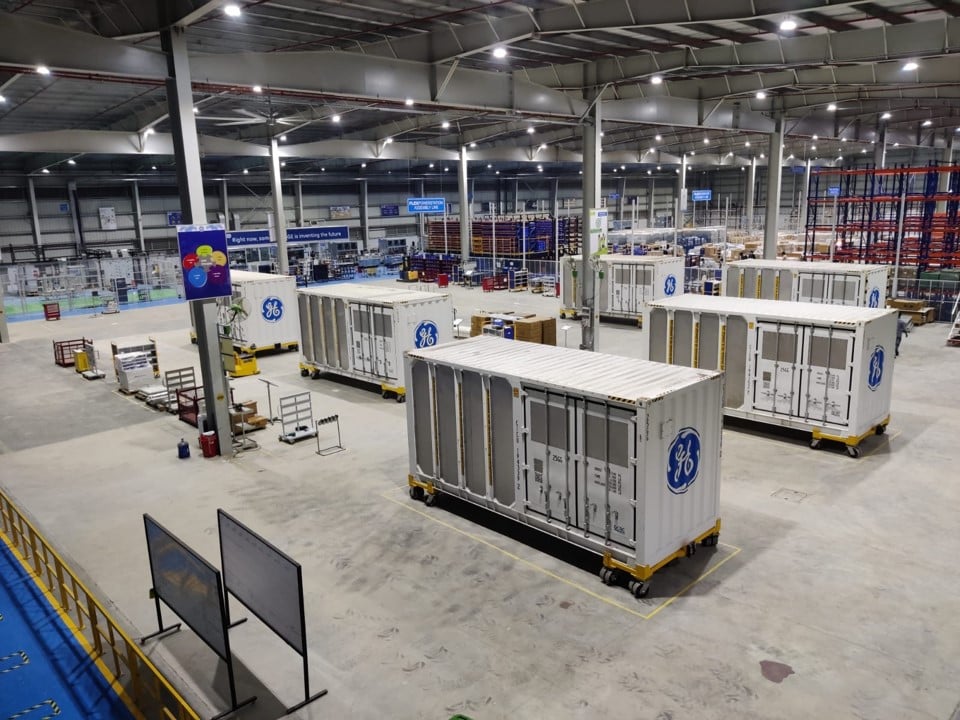 This the real deal—utility-scale megawatt hours. Through its production of GE’s FLEX portfolio, The Chennai facility will provide fully integrated platforms for dispatchable, green megawatt-hour systems in solar, storage and hybrid applications.

The FLEXINVERTER is an integrated, containerized solution that includes a solar inverter and a medium-voltage power transformer paired within a standard 20-foot ISO high cube capsule. It’s complemented by the FLEXRESERVOIR, a battery energy storage and power electronics solution that GE says is both systems-integrated and suitable to a wide range of configurations and market applications. The third member of the triumvirate is FLEXIQ, a digital control platform that optimizes overall operational efficiency and maintains grid compliance.

As illustrated above, when deployed together GE’s full solution can simultaneously accommodate hybrid wind and solar renewable energy sources.

Though available as an entire containerized solution, the FLEXINVERTER is at the base level, as its name implies, a battery energy storage inverter. A true heavyweight, it works with input voltages of up to 1350 V, and with currents of up to 4200 A. Maximum power peaks at 3.9 megawatts (MW), and it is possible to combine two inverters into one transformer for up to 8 MW. 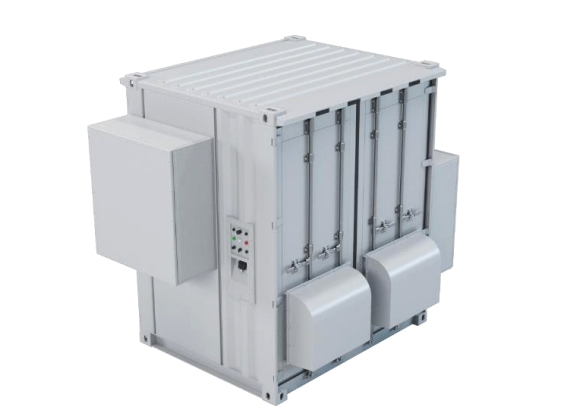 Inverter efficiency is better than 98%, and the nighttime auxiliary power requirement is a scant 200 W. Plant control interface is via Modbus TCP or EGD, and the diagnostic interface is also through Modbus TCP. The unit is air-cooled and there is overvoltage protection on both the AC and DC ends. Dimensions are 6.5 x 8 x 9.5 feet.

GE’s FLEXRESERVOIR is a utility-scale energy storage solution. Its purpose is to facilitate the storage of renewable power locally, if that power isn’t immediately loaded onto the power grid. It combines the company's expertise in plant controls, power electronics, and battery management systems.

Though the company touts the modular and scalable nature of the system, in addition to its AC-DC coupling flexibility and ability to operate with or without a PV optimizer, it offers no accessible technical documentation on its product page. Precise specifications were therefore unavailable.

FLEXIQ is a software platform that simplifies the operation of hybrid plant applications, which are characterized by a medley of renewable and energy storage systems and technologies. In such complex setups, operators will appreciate the unified and dynamic control that FLEXIQ provides, allowing them to optimize system performance.

The platform consists of a number of functional subsystems. Hybrid Architect is a system design tool that, per GE’s product page, aligns engineering design with project economics. There is also Plant Control, which GE describes as an integrated monitoring and control platform, in addition to a dispatch system that schedules battery charge and discharge cycles. Finally, there is MD, a tracking app for fleet-level asset performance.

As EE Power reported in March, solar power and battery storage projects will account for 60% of planned electric capacity additions through 2023. Specifically, deployment here will constitute nearly two-thirds of the 85 gigawatts expected to come online by the end of next year.

This trend will likely only continue, especially given the upheaval currently rocking the international market for fossil fuels. As such, the role of products such as those offered by GE’s Renewable Hybrids factory in Vallam will become only more crucial in the years to come.