Magnesium batteries offer promise for safely powering modern life – unlike traditional lithium ion batteries, they are not flammable or subject to exploding – but their ability to store energy has been limited.

Researchers reported Aug. 24 in the journal Nature Communications the discovery of a new design for the battery cathode, drastically increasing the storage capacity and upending conventional wisdom that the magnesium-chloride bond must be broken before inserting magnesium into the host.

“We are combining a nanostructured cathode and a new understanding of the magnesium electrolyte,” said Yan Yao, associate professor of electrical and computer engineering at the University of Houston and lead author on the paper. “That’s new.”

The work was first conceived by Yao and postdoctoral fellow Hyun Deog Yoo in 2014; the project spanned several years and involved scientists from three universities and three national laboratories, working both experimentally and theoretically. 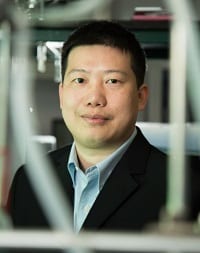 Yan Yao, associate professor of electrical and computer engineering at the University of Houston

“Magnesium ion is known to be hard to insert into a host,” said Yoo, first author on the paper. “First of all, it is very difficult to break magnesium-chloride bonds. More than that, magnesium ions produced in that way move extremely slowly in the host. That altogether lowers the battery’s efficiency.”

The new battery stores energy by inserting magnesium monochloride into a host, such as titanium disulfide. By retaining the magnesium-chloride bond, Yao said, the cathode demonstrated much faster diffusion than traditional magnesium versions.

This schematic shows the structural evolution of titanium disulfide at different stages of intercalation. Interlayers are expanded or distorted as different amounts of pillaring molecules, complex cations and solvents are intercalated into the van der Waals gap of a host material at each stage.

The researchers report the new battery has storage capacity of 400 mAh/g, compared with 100 mAh/g for earlier magnesium batteries. Commercial lithium ion batteries have a cathode capacity of about 200 mAh/g, said Yao, who is also a principal investigator with the Texas Center for Superconductivity at UH.

Voltage of the new battery remains low at about one volt. That compares to three to four volts for lithium batteries.

The high voltage, coupled with their high energy density, has made lithium ion batteries the standard. But lithium is expensive and can develop breaches in its internal structure, a condition known as dendrite growths, which can cause the batteries to catch fire. As an earth-abundant resource, magnesium is cheaper and does not form dendrites.

Until now, however, it has been held back by the need for a better cathode – the electrode from which the current flows – and more efficient electrolytes, the medium through which the ionic charge flows between cathode and anode.

The opening still was small, increased from 0.57 nanometers to 1.8 nanometers, but Yao said that allowed for the magnesium chloride to be inserted.

“We hope this is a general strategy,” Yoo said. “Inserting various polyatomic ions in higher voltage hosts, we eventually aim to create higher-energy batteries at a lower price, especially for electric vehicles.”