Researchers from the University of Maryland and the Army Research Laboratory collaborate and create a new electrolyte design for high-capacity anode materials in lithium-ion batteries.

Researchers from the University of Maryland and the Army Research Laboratory found a solution to improve the resilience of the silicon anode. The researchers created a new electrolyte that forms a more durable outer layer around the silicon anode which protects against the damaging effect of the swelling silicon anode particles. 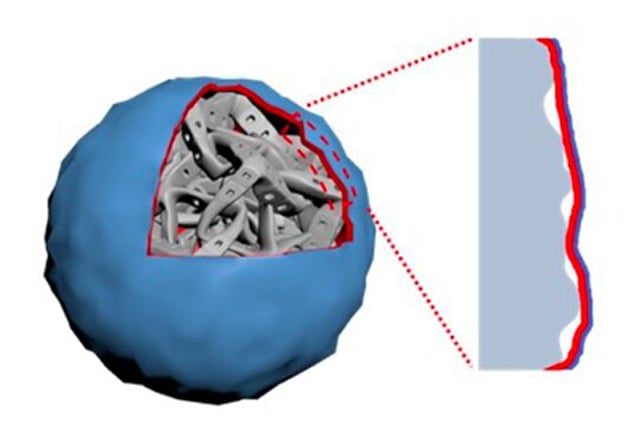 The natural formation of a layer of newly-designed electrolyte protecting a silicon nanoparticle anode in a battery. Image used courtesy of the University of Maryland.

The team of researchers designed their electrolyte solution by using a salt, Lithium hexafluorophosphate (LiPF6), along with a mixture of ether solvents. This composite formed a hardy LiF-rich SEI protective layer. This layer exhibits a low affinity for the lithiated silicon particles. This allows the lithiated silicon to re-distribute itself during volume change without damaging the SEI.

Lithium-ion batteries (LIBs) are a staple source of power for a wide variety of electronic devices and appliances used worldwide. While this technology is effective, there are a number of limitations and clear avenues for improvement that must be made. To improve battery performance, researchers from the University of  Maryland and the Army Research Laboratory created a new electrolyte that acts to protect the silicon anode and improve cycle life.

Both silicon and graphite anodes used in current batteries have their respective pros and cons. Silicon is a preferred material as it has a higher capacity and low environmental impact compared with graphite. Silicon anodes have a capacity (approximately 350 milliamp-hours (mAh) per gram) that is nearly 10 times higher than that of graphite (around 2,800 mAh per gram). Despite this, silicon somewhat falls behind graphite in one aspect. As the silicon ion charges, it changes volume, expanding as much as 300% and contracting. This can cause the anodes’ solid electrolyte interphase (SEI) outer layer to crack and the battery to malfunction. This layer forms naturally when the anode particles make contact with an electrolyte.

In a paper published last month, researchers behind the development of this game-changing electrolyte explain how the unique LiF-rich SEI protective layer enhances good cycling and high Coulombic efficiency (CE) in LIBs containing silicon anodes. In theory, their electrolyte design could be used in all high-capacity alloy anodes.

In a news release, lead author of the paper, Ji Chen of the Chemical and Biomolecular Engineering Department at the University of Maryland, said, “Our research proves that it is practical and possible to stably cycle silicon, aluminum and bismuth particles as lithium-ion battery anodes, simply with a rationally designed electrolyte, which has been regarded as unachievable before.”

Despite this unprecedented advancement in battery technology, the researchers still believe that more work needs to be done before the commercialization of their electrolyte, particularly in the way of expanding the voltage window of 4.2V and licensing the technology to battery manufacturers.